Although ARP is easy to implement, it provides no security mechanism and is vulnerable to network attacks. An attacker can exploit ARP vulnerabilities to attack network devices in the following ways:

·          Acts as a trusted user or gateway to send ARP packets so the receiving devices obtain incorrect ARP entries.

·          Sends a large number of IP packets for which ARP cannot find corresponding MAC addresses (called unresolvable IP packets) to have the receiving device busy with resolving IP addresses until its CPU is overloaded.

·          Sends a large number of ARP packets to overload the CPU of the receiving device.

If a device receives a large number of unresolvable IP packets from a host, the following situations can occur.

·          The device sends a large number of ARP requests, overloading the target subnets.

To protect the device from such unresolvable IP attacks, you can configure the following features:

·          ARP source suppression—Stops resolving packets from an IP address if the number of unresolvable IP packets from the IP address exceeds the upper limit within 5 seconds. The device continues ARP resolution when the interval elapses. This feature is applicable if the attack packets have the same source addresses.

This feature is applicable regardless of whether the attack packets have the same source addresses.

As shown in Figure 1, a LAN contains two areas: an R&D area in VLAN 10 and an office area in VLAN 20. Each area connects to the gateway (Device) through an access switch.

A large number of ARP requests are detected in the office area and are considered as the consequence of an unresolvable IP attack. To prevent such attacks, configure ARP source suppression or ARP blackhole routing. 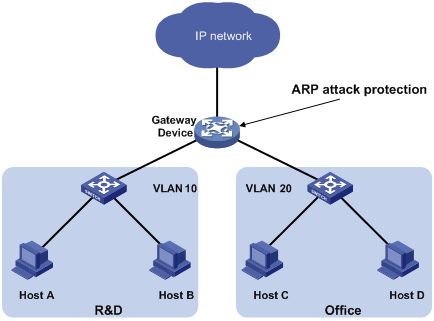 ·          If the attack packets have the same source address, configure ARP source suppression:

# Configure the device to process a maximum of 100 unresolvable packets per source IP address within 5 seconds.

# Configure the device to probe ARP blackhole routes every 2 seconds.

Configure this feature when ARP attack detection or ARP snooping is enabled, or when ARP flood attacks are detected.

This task sets a rate limit for ARP packets received on an interface. When the receiving rate of ARP packets on the interface exceeds the rate limit, those packets are discarded.

You can enable sending notifications to the SNMP module or enable logging for ARP packet rate limit.

·          If notification sending is enabled, the device sends the highest threshold-crossed ARP packet rate within the sending interval in a notification to the SNMP module. You must use the snmp-agent target-host command to set the notification type and target host. For more information about notifications, see Network Management and Monitoring Command Reference.

This feature checks the number of ARP packets delivered to the CPU. If the number of packets from the same MAC address within 5 seconds exceeds a threshold, the device adds the MAC address to an ARP attack entry. Before the entry ages out, the device handles the attack by using either of the following methods:

·          Filter—Generates log messages and filters out subsequent ARP packets from that MAC address.

You can exclude the MAC addresses of some gateways and servers from this detection. This feature does not inspect ARP packets from those devices even if they are attackers.

As shown in Figure 2, the hosts access the Internet through a gateway (Device). If malicious users send a large number of ARP requests to the gateway, the gateway might crash and cannot process requests from the clients. To solve this problem, configure source MAC-based ARP attack detection on the gateway.

An attacker might forge a large number of ARP packets by using the MAC address of a valid host as the source MAC address. To prevent such attacks, configure the gateway in the following steps:

4.        Exclude the MAC address of the server from this detection.

# Set the lifetime for ARP attack entries to 60 seconds.

Configure this feature on gateways to prevent user spoofing.

·          Upon receiving an ARP request destined for the gateway, the gateway sends an ARP reply but does not create an ARP entry.

·          Upon receiving an ARP reply, the gateway determines whether it has resolved the sender IP address:

¡  If yes, the gateway performs active acknowledgement. When the ARP reply is verified as valid, the gateway creates an ARP entry.

¡  If no, the gateway discards the packet.

When you configure user validity check, follow these guidelines:

Enable validity check for ARP packets received on untrusted ports and specify the following objects to be checked:

ARP restricted forwarding controls the forwarding of ARP packets that are received on untrusted interfaces and have passed user validity check as follows:

·          If the packets are ARP requests, they are forwarded through the trusted interface.

The following is an example of an ARP attack detection log message: 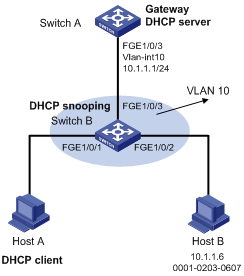 After the configurations are completed, ARP packets received on interfaces FortyGigE 1/0/1 and FortyGigE 1/0/2 have their MAC and IP addresses checked first, and then are checked against the static IP source guard binding entries and finally DHCP snooping entries.

ARP scanning is typically used together with the fixed ARP feature in small-scale networks.

1.        Sends ARP requests for each IP address in the address range.

When you configure ARP scanning and fixed ARP, follow these restrictions and guidelines:

·          ARP scanning will take some time. To stop an ongoing scan, press Ctrl + C. Dynamic ARP entries are created based on ARP replies received before the scan is terminated.

·          The arp fixup command is a one-time operation. You can use this command again to convert the dynamic ARP entries learned later to static.

·          Due to the limit on the total number of static ARP entries, some dynamic ARP entries might fail the conversion.

Configure this feature on interfaces not connected with a gateway to prevent gateway spoofing attacks.

When such an interface receives an ARP packet, it checks whether the sender IP address in the packet is consistent with that of any protected gateway. If yes, it discards the packet. If not, it handles the packet correctly.

When you configure ARP gateway protection, follow these guidelines:

·          You can enable ARP gateway protection for a maximum of eight gateways on an interface.

·          Do not configure both the arp filter source and arp filter binding commands on an interface.

As shown in Figure 4, Host B launches gateway spoofing attacks to Switch B. As a result, traffic that Switch B intends to send to Switch A is sent to Host B.

Configure Switch B to block such attacks. An interface enabled with this feature checks the sender IP and MAC addresses in a received ARP packet against permitted entries. If a match is found, the packet is handled correctly. If not, the packet is discarded.

·          You can configure a maximum of eight permitted entries on an interface.

·          Do not configure both the arp filter source and arp filter binding commands on an interface. 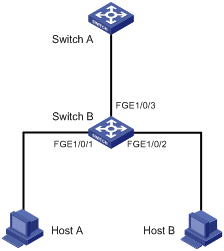 # Configure ARP filtering on Switch B.

# Verify that FortyGigE 1/0/1 permits ARP packets from Host A and discards other ARP packets.

# Verify that FortyGigE 1/0/2 permits ARP packets from Host B and discards other ARP packets.