Secure Sockets Layer (SSL) is a cryptographic protocol that provides communication security for TCP-based application layer protocols such as HTTP. SSL has been widely used in applications such as e-business and online banking to provide secure data transmission over the Internet.

a.     The sender uses a MAC algorithm and a key to calculate a MAC value for a message. Then, it appends the MAC value to the message and sends the message to the receiver.

b.     The receiver uses the same key and MAC algorithm to calculate a MAC value for the received message, and compares it with the MAC value appended to the message.

The following describes the major functions of SSL protocols:

·     SSL record protocol—Fragments data received from the upper layer, computes and adds MAC to the data, and encrypts the data.

·     SSL change cipher spec protocol—Notifies the receiver that subsequent packets are to be protected based on the negotiated cipher suite and key.

·     SSL alert protocol—Sends alert messages to the receiving party. An alert message contains the alert severity level and a description.

The device supports the FIPS mode that complies with NIST FIPS 140-2 requirements. Support for features, commands, and parameters might differ in FIPS mode (see "Configuring FIPS") and non-FIPS mode.

To enhance system security, you can disable specific SSL protocol versions so the SSL server cannot use them for session negotiation.

An SSL client policy is a set of SSL parameters that the client uses to establish a connection to the server. An SSL client policy takes effect only after it is associated with an application such as FTP. For information about FTP, see Fundamentals Configuration Guide.

As shown in Figure 3, users need to access and manage the device through the Web interface.

To protect the device and prevent data from being eavesdropped or tampered with, configure the device to be accessible through HTTPS only.

In this example, the CA server runs Windows Server and has the SCEP plug-in installed. 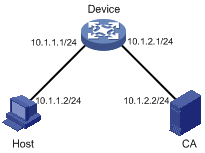 To meet the network requirements, perform the following tasks:

·     Configure the device as the HTTPS server and request a server certificate for the device. For more information about HTTPS, see Fundamentals Configuration Guide.

·     Request a client certificate for the host so that the device can authenticate the identity of the host.

1.     Make sure the device, the host, and the CA server can reach each other. (Details not shown.)

2.     Configure the HTTPS server on the device:

# Create a PKI entity named en. Set the common name and FQDN for the entity.

If the key modulus is greater than 512,it will take a few minutes.

The trusted CA's finger print is:

Is the finger print correct?(Y/N):y

# Request a server certificate for the device.

# Configure the HTTPS service to use SSL server policy myssl.

# Create a local user named usera. Set the password to 123, service type to https, and user role to network-admin.

3.     Request a client certificate for the host:

b.     Request a client certificate for the host. (Details not shown.)

Perform the following tasks on the host:

2.     Select the certificate issued by the CA server to the host.

The login page of the device should appear.

Verify that now you can log in to the Web interface to access and manage the device.