Setting the age timer for ND entries in stale state· 14

Configuring a static PMTU for a specified IPv6 address 18

Configuring the maximum ICMPv6 error packets sent in an interval 20

Internet Protocol Version 6 (IPv6), also called IP next generation (IPng), was designed by the Internet Engineering Task Force (IETF) as the successor to Internet Protocol version 4 (IPv4). The significant difference between IPv6 and IPv4 is that IPv6 increases the IP address size from 32 bits to 128 bits.

The source and destination IPv6 addresses are 128 bits (or 16 bytes) long. IPv6 can provide 3.4 x 1038 addresses to meet the requirements of hierarchical address division and the allocation of public and private addresses.

·           Stateful address autoconfiguration enables a host to acquire an IPv6 address and other configuration information from a server (for example, a DHCP server).

The Flow Label field in the IPv6 header allows the router to label the packets and facilitates the special handling of a flow.

An IPv6 address consists of an address prefix and an interface ID, which are equivalent to the network ID and the host ID of an IPv4 address respectively.

·           Anycast address—An identifier for a set of interfaces (typically belonging to different nodes). A packet sent to an anycast address is delivered to the nearest one of the interfaces identified by that address. The nearest interface is chosen according to the routing protocols' measure of distance.

The type of an IPv6 address is designated by the first several bits, the format prefix. Table 1 lists the mappings between address types and format prefixes.

Figure 2 shows the process of how an EUI-64 address-based interface identifier is generated from a MAC address.

The EUI-64 address-based interface identifier is generated randomly by the router.

Table 3 lists the types and functions of ICMPv6 messages used by the ND protocol. 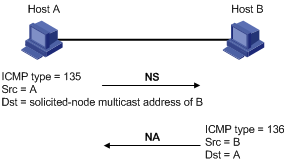 The address resolution operates in the following steps:

3.      Host A acquires the link-layer address of Host B from the NA message.

After Host A acquires the link-layer address of its neighbor Host B, Host A can use NS and NA messages to check whether Host B is reachable.

1.      Host A sends an NS message whose destination address is the IPv6 address of Host B.

2.      If Host A receives an NA message from Host B, Host A decides that Host B is reachable. Otherwise, Host B is unreachable.

After Host A acquires an IPv6 address, it will perform Duplicate Address Detection (DAD) to check whether the address is being used by any other node (similar to the gratuitous ARP function in IPv4). DAD is accomplished through NS and NA message exchanges. Figure 4 shows the DAD process. 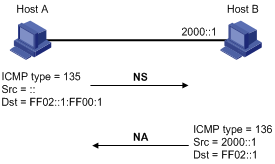 The DAD operates in the following steps:

Router/prefix discovery enables a node to locate the neighboring routers and to learn from the received RA message configuration parameters such as the prefix of the network where the node is located.

Stateless address autoconfiguration enables a node to generate an IPv6 address automatically according to the information obtained through router/prefix discovery.

Router/prefix discovery is implemented through RS and RA messages in the following steps.

1.      At startup, a node sends an RS message to request the address prefix and other configuration information for autoconfiguration.

A newly started host may contain only a default route to the gateway in its routing table. When certain conditions are satisfied, the gateway sends an ICMPv6 Redirect message to the source host so that the host can select a better next hop to forward packets (similar to the ICMP redirection function in IPv4).

The gateway sends an ICMPv6 Redirect message when the following conditions are satisfied.

·           The selected route itself is not created or modified by an ICMPv6 Redirect message.

The links that a packet passes from a source to a destination may have different MTUs. In IPv6, when the packet size exceeds the path MTU of a link, the packet is fragmented at the source end of the link to reduce the processing pressure on intermediate routers and use network resources effectively.

The path MTU (PMTU) discovery mechanism is to find the minimum MTU of all links in the path between a source and a destination. Figure 5 shows how a source host discovers the PMTU to a destination host.

The PMTU discovery operates in the following steps.

1.      The source host compares its MTU with the packet to be sent, performs necessary fragmentation, and sends the resulting packet to the destination host.

2.      If the MTU supported by a forwarding interface is smaller than the packet, the device discards the packet and returns an ICMPv6 error packet containing the interface MTU to the source host.

3.      After receiving the ICMPv6 error packet, the source host uses the returned MTU to limit the packet size, performs fragmentation, and sends the resulting packet to the destination host.

6PE is a transition technology by which Internet service providers (ISPs) can use existing IPv4 backbone networks to allow communications between isolated IPv6 networks.

6PE adds labels to the IPv6 routing information of customer networks and advertises the information into the IPv4 backbone network over Internal Border Gateway Protocol (IBGP) sessions. IPv6 packets are labeled and forwarded over tunnels on the backbone network. The tunnels can be GRE tunnels or MPLS LSPs.

When an ISP wants to utilize the existing IPv4/MPLS network to provide IPv6 traffic switching capability through MPLS, only the PE routers need to be upgraded, so 6PE is a highly efficient solution. In addition, the operation risk of 6PE is very low.

Protocols and standards related to IPv6 include:

Enable IPv6 before you perform any IPv6-related configuration. Without IPv6 enabled, an interface cannot forward IPv6 packets even if it has an IPv6 address configured.

To configure an interface to generate an EUI-64 IPv6 address:

To specify an IPv6 address manually for an interface:

IPv6 link-local addresses can be configured in either of the following ways:

To configure automatic generation of an IPv6 link-local address for an interface:

To configure an IPv6 anycast address for an interface:

The IPv6 address of a neighboring node can be resolved into a link-layer address dynamically through NS and NA messages or through a manually configured static neighbor entry.

·           Associate a neighbor IPv6 address and link-layer address with the Layer 3 interface of the local node.

·           Associate a neighbor IPv6 address and link-layer address with a port in a VLAN containing the local node.

To configure a static neighbor entry:

The router can dynamically acquire the link-layer address of a neighboring node through NS and NA messages and add it into the neighbor table. A large table may reduce the forwarding performance of the router. You can restrict the size of the neighbor table by setting the maximum number of neighbors that an interface can dynamically learn. When the number of dynamically learned neighbors reaches the threshold, the interface will stop learning neighbor information.

To configure the maximum number of neighbors dynamically learned:

Setting the age timer for ND entries in stale state

ND entries in stale state have an age timer. If an ND entry in stale state is not refreshed before the timer expires, it transits to the delay state. If it is still not refreshed in five seconds, the ND entry transits to the probe state, and the device sends an NS message for detection. If no response is received after three NS messages are sent, the device removes the ND entry.

To set the age timer for ND entries in stale state:

Table 4 Parameters in an RA message and their descriptions

To allow sending of RA messages:

An interface sends an NS message for DAD after acquiring an IPv6 address. If the interface does not receive a response within a specified time (determined by the ipv6 nd ns retrans-timer command), it continues to send an NS message. If it still does not receive a response after the number of attempts reaches the threshold (specified with the ipv6 nd dad attempts command), the acquired address is considered usable.

To configure the attempts to send an NS message for DAD:

IPv6 routers do not support packet fragmentation. After an IPv6 router receives an IPv6 packet, if the packet size is greater than the MTU of the forwarding interface, the router will discard the packet. Meanwhile, the router sends the MTU to the source host through an ICMPv6 packet — Packet Too Big message. The source host fragments the packet according to the MTU and resends it. To reduce the extra flow overhead resulting from packets being discarded, a proper interface MTU should be configured according to the actual networking environment.

To configure the interface MTU:

Configuring a static PMTU for a specified IPv6 address

You can configure a static PMTU for a specified destination IPv6 address. When a source host sends a packet through an interface, it compares the interface MTU with the static PMTU of the specified destination IPv6 address. If the packet size is larger than the smaller one between the two values, the host fragments the packet according to the smaller value.

To configure a static PMTU for a specified IPv6 address:

The aging time is invalid for a static PMTU.

To configure the aging time for dynamic PMTUs:

You can configure the following IPv6 TCP properties.

·           Load sharing based on polling—Each ECMP route is used in turn to forward packets.

Configuring the maximum ICMPv6 error packets sent in an interval

To configure the capacity and update interval of the token bucket:

A router sends out an ICMPv6 Time Exceeded message in the following cases:

·           If a received IPv6 packet’s destination IP address is not a local address and its hop limit is 1, the router sends an ICMPv6 Hop Limit Exceeded message to the source.

·           Upon receiving the first fragment of an IPv6 datagram with the destination IP address being the local address, the router starts a timer. If the timer expires before all the fragments arrive, an ICMPv6 Fragment Reassembly Timeout message is sent to the source.

If the router fails to forward a received IPv6 packet due to one of the following reasons, it drops the packet and sends a corresponding ICMPv6 Destination Unreachable error message to the source.

·           If no route is available for forwarding the packet, the router sends a "no route to destination" ICMPv6 error message to the source.

·           If the router fails to forward the packet due to administrative prohibition (such as a packet-filter firewall or an ACL), the router sends the source a "destination network administratively prohibited" ICMPv6 error message.

·           If the router fails to resolve the corresponding link layer address of the destination IPv6 address, the router sends the source an "address unreachable" ICMPv6 error message.

·           If the packet with the destination being local and transport layer protocol being UDP and the packet’s destination port number does not match the running process, the router sends the source a "port unreachable" ICMPv6 error message.

# Assign a global unicast addresses for interface GigabitEthernet 2/1/2 and allow it to advertise RA messages (no interface advertises RA messages by default).

# Display the IPv6 interface information on Router A. All the IPv6 global unicast addresses configured on the interface are displayed.

# Display the IPv6 interface settings on Router B. All the IPv6 global unicast addresses configured on the interface are displayed.

As shown in the output information, Host can ping Router B and Router A.