An interface stores outgoing packets in the egress buffer when congestion occurs.

An egress buffer uses the following types of resources:

Each type of resources has a fixed area and a shared area.

·          Fixed area—Partitioned into queues, each of which is equally divided by all the interfaces on a device, as shown in Figure 1. When congestion occurs, the following rules apply:

a.    An interface first uses the relevant queues of the fixed area to store packets.

b.    When a queue is full, the interface uses the space for the queue in the shared area.

c.    When the queue in the shared area is also full, the interface discards subsequent packets.

The system allocates the fixed area among queues as specified by the user. Even if a queue is not full, other queues cannot preempt its space. Similarly, the share of a queue for an interface cannot be preempted by other interfaces even if it is not full.

·          Shared area—Partitioned into queues, each of which is not equally divided by the interfaces, as shown in Figure 1. The system determines the actual shared-area ratio for each queue according to user configuration and the number of packets actually sent. If a queue is not full, other queues can preempt its space.

The system puts packets received on all interfaces into a queue in the order they arrive. When the queue is full, subsequent packets are dropped.

The Burst feature enables the device to automatically allocate cell and packet resources. It is well suited to the following scenarios:

·          Broadcast or multicast traffic is intensive, resulting in bursts of traffic.

?  Enters from multiple same-rate interfaces at the same time and goes out of an interface with the same rate.

By enabling the Burst feature, you can improve the processing performance of the switch operating in these scenarios to reduce packet loss.

The Burst feature might affect the QoS performance of the switch.

Make sure you are fully aware of the impact when enabling the Burst feature.

To enable the Burst feature:

Configure the switch to process high-volume traffic from the server to guarantee that packets can reach the hosts. 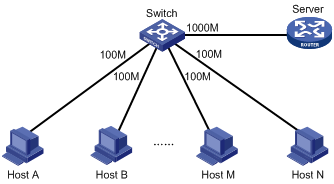 The data buffer on a switch is shared by all interfaces for buffering packets during periods of congestion.

This feature allows you to identify the interfaces that use an excessive amount of data buffer space. Then, you can diagnose those interfaces for anomalies.