Applications on the switch· 2

Applying an ACL to an interface for packet filtering· 13

Setting the interval for generating and outputting packet filtering logs· 13

An access control list (ACL) is a set of rules (or permit or deny statements) for identifying traffic based on criteria such as source IP address, destination IP address, and port number.

ACLs are primarily used for packet filtering. "Configuring packet filtering with ACLs" provides an example. You can use ACLs in QoS, security, routing, and other feature modules for identifying traffic. The packet drop or forwarding decisions depend on the modules that use ACLs.

Applications on the switch

An ACL is implemented in hardware or software, depending on the module that uses it.

·          If the module is implemented in hardware (for example, the packet filter or QoS module), the ACL is applied to hardware to process traffic.

·          If the module is implemented in software (for example, the routing module or the login management module), the ACL is applied to software to process traffic.

The Telnet and SNMP features in the login management module denies packets that do not match any ACL. Some modules (QoS for example) ignore the permit or deny action in ACL rules and do not base their drop or forwarding decisions on the action set in ACL rules. See the specified module for information about ACL application.

Each ACL category has a unique range of ACL numbers. When creating an ACL, you must assign it a number. In addition, you can assign the ACL a name for ease of identification. After creating an ACL with a name, you cannot rename it or delete its name.

The rules in an ACL are sorted in a specific order. When a packet matches a rule, the device stops the match process and performs the action defined in the rule. If an ACL contains overlapping or conflicting rules, the matching result and action to take depend on the rule order.

·          config—Sorts ACL rules in ascending order of rule ID. A rule with a lower ID is matched before a rule with a higher ID. If you use this method, check the rules and their order carefully.

By introducing a gap between rules rather than contiguously numbering rules, you have the flexibility of inserting rules in an ACL. This feature is important for a config-order ACL, where ACL rules are matched in ascending order of rule ID.

The ID automatically assigned to an ACL rule takes the nearest higher multiple of the numbering step to the current highest rule ID, starting with 0.

To avoid the risks, the ACL feature is designed as follows:

·          Filters all fragments by default, including non-first fragments.

·          Allows for matching criteria modification for efficiency. For example, you can configure the ACL to filter only non-first fragments.

To configure an IPv4 basic ACL:

To configure an IPv6 basic ACL:

IPv4 advanced ACLs match packets based on the following criteria:

To configure an IPv4 advanced ACL:

IPv6 advanced ACLs match packets based on the following criteria:

To configure an IPv6 advanced ACL:

User-defined ACLs allow you to customize rules based on information in protocol headers. You can define a user-defined ACL to match packets. A specific number of bytes after an offset (relative to the specified header) are compared against a match pattern after being ANDed with a match pattern mask.

To configure a user-defined ACL:

You can create an ACL by copying an existing ACL (source ACL). The new ACL (destination ACL) has the same properties and content as the source ACL, but not the same ACL number and name.

To successfully copy an ACL, make sure:

·          The destination ACL number is from the same category as the source ACL number.

To copy an ACL:

This section describes procedures for using an ACL to filter packets. For example, you can apply an ACL to an interface to filter incoming or outgoing packets.

Applying an ACL to an interface for packet filtering

To apply an ACL to an interface for packet filtering:

Setting the interval for generating and outputting packet filtering logs

To set the interval for generating and outputting packet filtering logs:

A company interconnects its departments through Device A. Configure an ACL to:

·          Permit access from the President's office at any time to the financial database server.

·          Deny access from any other department to the database server. 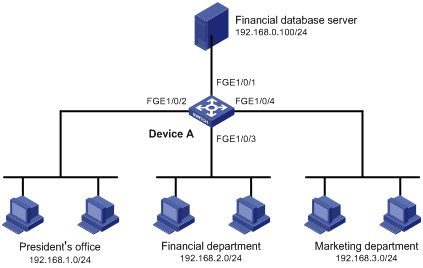 # Ping the database server from a PC in the Financial department during the working hours. (All PCs in this example use Windows XP).

Approximate round trip times in milli-seconds:

The output shows that the database server can be pinged.

# Ping the database server from a PC in the Marketing department during the working hours.

The output shows the database server cannot be pinged.

# Display configuration and match statistics for IPv4 advanced ACL 3000 on Device A during the working hours.

The output shows that rule 5 is active.

As shown in Figure 2, the hosts on subnet 192.168.1.0/24 access the server through the switch. Configure packet filtering on FortyGigE 1/0/1 of the switch to prevent TCP packets with the ACK or RST flag bit set from being forwarded to the server.

# Create advanced ACL 3000 and configure a rule to match TCP packets whose ACK or RST flag bit is set.

# Create advanced ACL 3001 and configure a rule to deny packets whose local QoS ID is 1.