A well-known university in China, formerly known as the Institute of Ethnology, was founded in Yan'an in September 1941. In June 1951, the Central Institute for Nationalities was officially established in Beijing. It was approved as a key national university as early as 1978. In its subsequent development, it had been ranked on the "211 Project" and "985 Project" list, which means it is one of China's top-ranked universities. There are currently 15,000+ full-time students, including 11,000+ undergraduates and 4,000+ masters and doctoral students.

The biggest issue of the Chinese university's campus network at that time was its rigid architecture and complicated operational and maintenance workload. BYOD applications were widely adapted across the campus and wireless mobile officing had become the mainstream access mode. The customer required plug-and-play services devoid of manual interruptions. For IT administrators, the legacy network had difficulty providing network-wide policies and a consistent service experience.

Based on analysis of user characteristics, network usage, and traffic statistics and with the help of H3C's industry-leading SDN technology and high-performance products, H3C customized a new generation of flattened campus network architecture for the university— the Application Driven Campus (AD Campus) Solution. The core layer utilizes high-end SDN switches (S12500-X) and six high-performance SDN convergence switches (S10508). The S5560X switches are adopted for network distribution among buildings. The M9000 series of high-performance and multi-service security gateways are concurrently deployed as security devices at the egress of the campus network. The following figure shows the architecture topology of the AD-Campus solution. 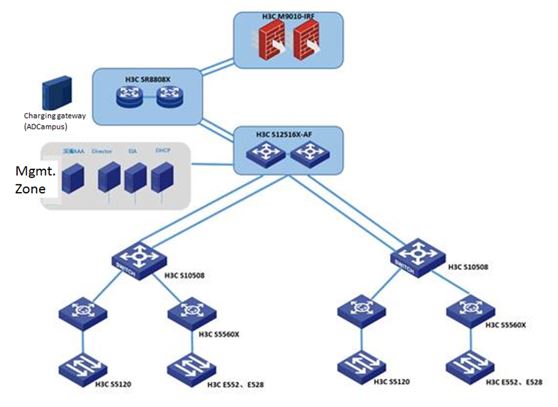 Figure 1 Topology of the university

Network adapts to users: Teachers and students can obtain relevant access rights in classrooms, offices, or dormitories. The network can be automatically configured and results in a consistent experience within the entire campus network. The workload for network arrangement and configuration is significantly reduced.

Simplified O&M: Network deployment, network expansion and upgrades, and faulty device replacements can be automatically implemented by controllers, which considerably reduces the difficulty of network operation and maintenance while improving working efficiency.

H3C's AD Campus Solution helped construct a reliable, high-bandwidth, easy-to-control, and easy-to-manage SDN campus network for the university. The new campus network now is effectively carrying the university's educational, research, and applications management. It increased cable access bandwidth for teachers and students tenfold. With the unified management of wired and wireless services, the maintenance workload had been reduced by more than 50%, the foundation for constructing a smart campus. The flexibility of network expansion and the automation of equipment online has greatly shortened device online periods for the campus. In addition, by cooperating with a unified billing platform, the management of wired and wireless users as well as billing policies have been unified. After the entire campus network SDN was upgraded and reconstructed, the informatization of the entire campus was upgraded to a new level. Campus informatization construction has also entered a new phase, and various types of innovations in campus applications have also been better implemented.

As a leader in new IT solutions, H3C has continually invested in and been developing the field of SDN for many years, providing mature innovative solutions for Hi-Education and helping build reliable and secure bearer networks to construct smart campuses.