Enabling CWMP from the CLI 5

Configuring the default ACS attributes from the CLI 6

Enabling NAT traversal for the CPE· 9

Specifying an SSL client policy for HTTPS connection to ACS· 10 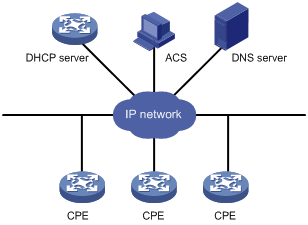 ·     ACS—Autoconfiguration server, the management device in the network.

·     CPE—Customer premises equipment, the managed device in the network.

·     DNS server—Domain name system server. CWMP defines that the ACS and the CPE use URLs to identify and access each other. DNS is used to resolve the URLs.

The device is operating as a CPE in the CWMP framework.

You can autoconfigure and upgrade CPEs in bulk from the ACS.

You can create configuration files for different categories of CPEs on the ACS.

The following are methods available for the ACS to issue configuration to the CPE:

When the ACS finds a software version update, the ACS notifies the CPE to download the software image file from a specific location. The location can be the URL of the ACS or an independent file server.

The CPE notifies the ACS of the download result (success or failure) when it completes a download attempt. The CPE downloads the specified image file only when the file passes validity verification.

The ACS can require the CPE to upload a configuration or log file to a specific location. The destination location can be the ACS or a file server.

The CPE allows the ACS to monitor the status and performance objects in Table 1.

CWMP uses remote procedure call (RPC) methods for bidirectional communication between CPE and ACS. The RPC methods are encapsulated in HTTP or HTTPS.

Autoconnect between ACS and CPE

The CPE automatically initiates a connection to the ACS when one of the following events occurs:

·     CPE startup. The CPE initiates a connection to the ACS after the startup.

As shown in Figure 2, the CPE and the ACS use the following process to establish a connection:

1.     After obtaining the basic ACS parameters, the CPE initiates a TCP connection to the ACS.

2.     If HTTPS is used, the CPE and the ACS initialize SSL for a secure HTTP connection.

3.     The CPE sends an Inform message in HTTPS to initiate a CWMP session.

4.     After the CPE passes authentication, the ACS returns an Inform response to establish the session.

5.     After sending all requests, the CPE sends an empty HTTP post message.

10.     The ACS sends an empty HTTP message to notify the CPE that it has no other requests.

11.     The CPE closes the connection, and then initiates a new connection to the new ACS URL. 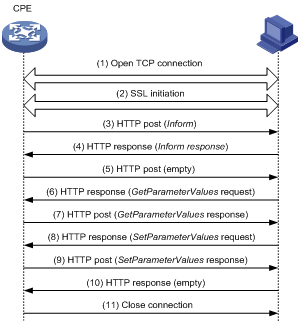 To use CWMP, you must enable CWMP from the CLI. You can then configure ACS and CPE attributes from the CPE's CLI, the DHCP server, or the ACS.

This document only describes configuring ACS and CPE attributes from the CLI and DHCP server. For more information about configuring and using the ACS, see ACS documentation.

Enabling CWMP from the CLI

You must enable CWMP for other CWMP settings to take effect, whether they are configured from the CLI, or assigned through the DHCP server or ACS.

You can configure two sets of ACS attributes for the CPE: preferred and default.

·     The default ACS attributes are configurable only from the CLI.

The CPE uses the default ACS attributes for connection establishment only when it is not assigned a preferred ACS URL from the CLI, ACS, or DHCP server.

You can use DHCP option 43 to assign the ACS URL and ACS login authentication username and password.

If the DHCP server is an H3C device, you can configure DHCP option 43 by using the option 43 hex 01length URL username password command.

·     length—A hexadecimal number that indicates the total length of the length, URL, username, and password arguments, including the spaces between these arguments. No space is allowed between the 01 keyword and the length value.

·     username—Username for the CPE to authenticate to the ACS.

·     password—Password for the CPE to authenticate to the ACS.

Configuring the preferred ACS attributes from the CLI

Configuring the default ACS attributes from the CLI

You can assign CPE attribute values to the CPE from the CPE's CLI or the ACS. The CLI- and ACS-assigned values overwrite each other, whichever is assigned later.

For more information about the configuration methods supported for each CPE attribute, see "Configuration task list."

The ACS can use the provision code to identify services assigned to each CPE. For correct configuration deployment, make sure the same provision code is configured on the CPE and the ACS. For information about the support of your ACS for provision codes, see the ACS documentation.

To configure the provision code:

·     The IP addresses of the CWMP connection interface and the ACS are not in the same subnet.

In this case, you need to perform this task to manually set the CWMP connection interface.

To configure the CWMP connection interface:

To connect to the ACS periodically for CPE information update:

To connect to the ACS for configuration or software update at a scheduled time:

The CPE retries a connection automatically when one of the following events occurs:

To set the maximum number of connection retries that the CPE can make:

The timer also specifies the maximum amount of time the CPE waits for the response to a session request. The CPE determines that its session attempt has failed when the timer expires.

To set the close-wait timer for the CPE:

Enabling NAT traversal for the CPE

For the connection request initiated from the ACS to reach the CPE, you must enable NAT traversal feature on the CPE when a NAT gateway resides between the CPE and the ACS.

The NAT traversal feature complies with RFC 3489 Simple Traversal of UDP Through NATs (STUN). The feature enables the CPE to discover the NAT gateway, and obtain an open NAT binding (a public IP address and port binding) through which the ACS can send unsolicited packets. The CPE sends the binding to the ACS when it initiates a connection to the ACS. For the connection requests sent by the ACS at any time to reach the CPE, the CPE maintains the open NAT binding.

To enable NAT traversal on the CPE:

Specifying an SSL client policy for HTTPS connection to ACS

CWMP uses HTTP or HTTPS for data transmission. If the ACS uses HTTPS for secure access, its URL begins with https://. You must configure an SSL client policy for the CPE to authenticate the ACS for HTTPS connection establishment. For more information about configuring SSL client policies, see Security Configuration Guide.

To specify an SSL client policy for the CPE to establish an HTTPS connection to the ACS:

As shown in Figure 3, use the ACS to bulk-configure the devices (CPEs), and assign ACS attributes to the CPEs from the DHCP server.

The configuration files for the devices in equipment rooms A and B are configure1.cfg and configure2.cfg, respectively. Table 4 shows the ACS attributes for the CPEs to connect to the ACS.

For more information, see the documents for the ACS.

In this example, an H3C device is operating as the DHCP server.

Connecting the CPEs to the network

# Connect the CPEs to the network, and then power on the CPEs. (Details not shown.)

At startup, the CPEs obtain the IP address and ACS information from the DHCP server to initiate a connection to the ACS. After the connection is established, the CPEs interact with the ACS to complete autoconfiguration.

Verify that the CPEs have obtained the correct configuration file from the ACS.