IT infrastructure which contains clouds, networks, and terminal devices is undergoing a deep transform. The IT infrastructure is migrating to the cloud with the aims of implementing the elastic expansion of computing resources and providing IT services on demand. In this context, H3C developed the Virtual Converged Framework (VCF) solution. This solution breaks the boundaries between the network, cloud management, and terminal platforms and transforms the IT infrastructure to a converged framework to accommodate all applications. It also implements automatic network provisioning and deployment.

In a VCF fabric, a device has one of the following roles:

·     Access node—As shown in Figure 2, an access node connects to an upstream leaf node and downstream terminal devices in a typical campus network. Cascading of access nodes is supported.

·     Border node—Located at the border of a VCF fabric to provide access to the external network. The following are basic concepts in Neutron:

·     Network—A virtual object that can be created. It provides an independent network for each tenant in a multitenant environment. A network is equivalent to a switch with virtual ports which can be dynamically created and deleted.

·     Subnet—An address pool that contains a group of IP addresses. Two different subnets communicate with each other through a router.

·     Port—A connection port. A router or a VM connects to a network through a port.

·     Router—A virtual router that can be created and deleted. It performs routing selection and data forwarding.

Neutron has the following components:

·     Neutron server—Includes the daemon process neutron-server and multiple plug-ins (neutron-*-plugin). The Neutron server provides an API and forwards the API calls to the configured plugin. The plug-in maintains configuration data and relationships between routers, networks, subnets, and ports in the Neutron database.

Neutron needs to be deployed on servers and network devices.

The following table shows Neutron deployment on a server.

The following table shows Neutron deployments on a network device. 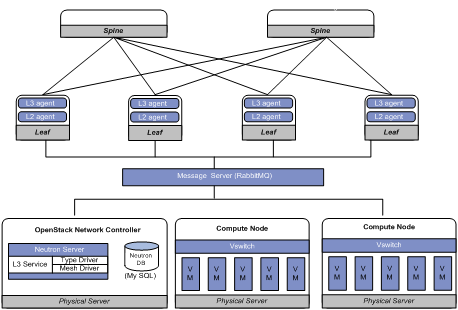 All VCF fabric commands are supported only on the default MDC.

If multiple spine nodes exist in a VCF fabric, a master spine node is specified to collect the topology for the entire network.

1.     Finish the underlay network planning (such as IP address assignment, reliability design, and routing deployment) based on user requirements.

¡     In a data center network, the device obtains an IP address through a management Ethernet interface after starting up without loading configuration.

¡     In a campus network, the device obtains an IP address through VLAN-interface 1 after starting up without loading configuration.

2.     Install and configure the Director server.

This step is required if you want to use the Director server to automatically create template files.

3.     Configure the DHCP server, the TFTP server, and the NTP server.

4.     Upload the template files to the TFTP server.

¡     Template for a leaf node in a VXLAN with a centralized gateway.

¡     Template for a leaf node in a VXLAN with distributed gateways.

¡     Template for a spine node in a VXLAN with a centralized gateway.

¡     Template for a spine node in a VXLAN with distributed gateways.

2.     Obtains an IP address, the IP address of the TFTP server, and a template file name from the DHCP server.

3.     Downloads tag file device_tag.csv from the TFTP server and compares its SN code with the SN code in the tag file.

¡     If the two SN codes are the same, the device uses the device role and system description in the tag file.

¡     If the two SN codes are different, the device does not use the device role and system description.

4.     Determines the name of the template file to download based on the following information:

¡     The template file name obtained from the DHCP server.

For example, template file dist_leaf.template is for a leaf node in a VXLAN network with distributed IP gateways.

5.     Downloads the template file from the TFTP server.

6.     Parses the template file and performs the following operations:

¡     Deploys static configurations that are independent from the VCF fabric topology.

¡     Deploys dynamic configurations according to the VCF fabric topology.

-     In a data center network, the device usually uses a management Ethernet interface to connect to the fabric management network. Only links between leaf nodes and servers are automatically aggregated.

A template file contains the following:

·     System-predefined variables—The variable names cannot be edited, and the variable values are set by the VCF topology discovery feature.

Automated overlay network deployment is mainly implemented through the following features of Neutron:

When you configure automated underlay network provisioning, follow these restrictions and guidelines:

·     As a best practice, do not modify the network type or the device role while the device is running. If it is necessary to do so, make sure you understand the impacts on the network and services.

·     If you change the role of the device, the new role takes effect after the device restarts up.

·     User-defined MDCs do not have a role by default. You can use the vcf-fabric role { access | leaf | spine } command to specify the role for the MDCs. Automated underlay network provisioning is not supported by user-defined MDCs. The Director server can identify the role of user-defined MDCs in the VCF fabric and deploy configuration to the MDCs through NETCONF.

When you configure automated overlay network deployment, follow these restrictions and guidelines:

·     If the network type is VLAN or VXLAN with a centralized IP gateway, perform this task on both the spine node and the leaf nodes.

·     If the network type is VXLAN with distributed IP gateways, perform this task on all leaf nodes.

·     As a best practice, do not perform any of the following tasks while the device is communicating with a RabbitMQ server:

¡     Change the source IPv4 address for the device to communicate with RabbitMQ servers.

¡     Bring up or shut down a port connected to a RabbitMQ server.

As shown in Figure 5, Devices A, B, and C all connect to the TFTP server and the DHCP server through management Ethernet interfaces. VM 1 resides on Compute node 1. VM 2 resides on the Compute node 2. The controller node runs OpenStack Kilo version and Ubuntu14.04 LTS operating system.

Configure a VCF fabric to meet the following requirements:

·     The VCF fabric is a VXLAN network deployed on spine node Device A and leaf nodes Device B and Device C to provide connectivity between VM 1 and VM 2. Device A acts as a centralized VXLAN IP gateway.

·     Devices A, B, and C complete automated underlay network provisioning by using template files after they start up.

·     Devices A, B, and C complete automated overlay network deployment after the controller is configured. 3.     Specify a template file (a file with the file extension .template) as the boot file.

Create template files and upload them to the TFTP server.

¡     Basic settings: Local username and password, user role, and so on.

Place the template files on the TFTP server. In this example, both spine node and leaf node exist on the VXLAN network, so two template files (vxlan_spine.template and vxlan_leaf.template) are required.

Powering up Device A, Device B, and Device C

2.     Configure the network as a VXLAN network:

Edit the /etc/neutron/plugin/ml2/ml2_conf.ini file as follows:

Before you configure the database, make sure you have configured the Neutron server.

2.     Create an OVS bridge named br-vlan and add interface Ethernet 0 (connected to the VCF fabric) to the bridge.

3.     Modify the bridge mapping on the OVS agent:

# Edit the /etc/neutron/plugins/ml2/openvswitch_agent.ini file as follows:

Perform the following tasks on the OpenStack dashboard.

In this example, VM 1 and VM 2 obtain IP addresses from the DHCP server. You must enable DHCP for the subnets.

1.     Verify the collected topology of the underlay network.

* indicates the master spine role among all spines

2.     Verify the automated configuration for the underlay network.

# Display information about automated underlay network provisioning on Device A.

3.     Verify the automated deployment for the overlay network.

# Display the running configuration for the current VSI on Device A.