The MDC technology is a 1:N virtualization technology. It can virtualize a physical network device or an IRF fabric into multiple logical network devices called MDCs. It virtualizes the control plane, the data plane, and the management plane. It supports independent starting and running of processes within each MDC. All MDCs on a physical device share the same kernel, but each MDC has its separate data space. Each MDC operates and provides services like a standalone physical device.

An MDC functions as a physical device and has separate software environment, data, and hardware resources. In addition, you can reboot an individual MDC without affecting the operation of other MDCs in the same physical device.

Isolation—MDCs are isolated from each other. Each MDC forwards network data by using only the interfaces assigned to it. An MDC has its own resources.

Control plane that enables independent routing calculation within the MDC.

Realizes virtualization on the network service level, and the per-MDC services give users the feeling that the MDCs are separated devices.

Enables the device administrator to manage and maintain non-service level resources only in the default MDC without virtualizing them.

Figure 1 shows the MDC software architecture. The modular architecture of the Comware V7 platform ensures that the processes run on a per-MDC basis. The control planes of MDCs are completely isolated and run independently.

Compared with the 1:N virtualization technologies Hypervisor and Bare-metal, MDC enables all MDCs to share the kernel, has the best management performances in operating system virtualization, and consumes less resources.

A typical distributed device (including IRF fabrics) has multiple MPUs and multiple interface cards. After you create MDCs on the device, each interface card must support operating of multiple MDCs, depending on how you assign interface cards and interfaces to the MDCs. When you create/start an MDC, the MDC is created/started on every MPU.

When you create MDCs, the system creates a virtual context for each MDC on each MPU and each interface card that the MDC is authorized to use. Each virtual context is called an MDC-OS, as shown in Figure 2. An MDC-OS contains all processes and data used to support the MDC on the card. All MDC-OSes of an MDC constitute the MDC.

Figure 2 MDCs on a distributed device 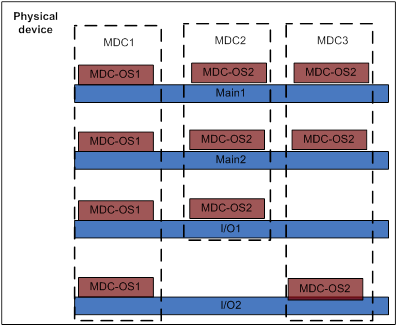 You can stop an MDC on an interface card at the CLI. Then, the MDC has only non-virtual processes running on the card and has only a little data to synchronize. 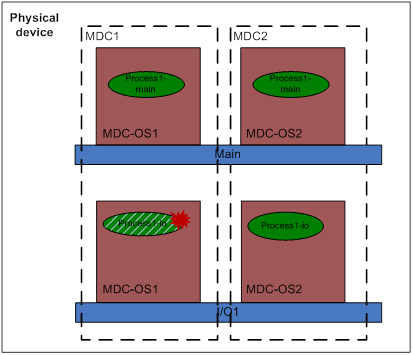 A device supporting the MDC technology is an MDC itself, and is called the "default MDC." The default MDC always uses the name Admin and the ID 1. You cannot delete it or change its name or ID.

From the default MDC, you can manage the whole physical device, create and delete non-default MDCs, and assign interface, CPU, storage space (Flash and CF card), and memory space resources to non-default MDCs.

Creating an MDC is to use some resources on the device to construct a logical device. Immediately after being created, a non-default MDC is not started and is placed in inactive state. You can allocate resources for it, but cannot switch to or log in to it.

Once you assign resources to a non-default MDC, the default MDC cannot use the resources anymore.

Starting an MDC is to "power on" the logical device. An MDC must be started to operate. A started non-default MDC is in active state and is ready to provide services. You can switch to it from the default MDC or log in to it remotely to configure it.

Stopping an MDC places the MDC to inactive state, deletes all its MDC-OSes, and disables its processes from providing services, but does not release the resources assigned to it. Stopping an MDC is equivalent to "power off" the logical device. A stopped MDC can be re-started.

You can only stop an MDC that is already started.

After being deleted, an MDC does not exist anymore, and all resources assigned to it were returned to the default MDC.

Only an administrator of the default MDC who has the network-admin user role can allocate resources for non-default MDCs. The resources that can be allocated include:

Use the limit-resource cpu weight command to assign CPU weights to non-default MDCs. The setting for an MDC takes effect on all cards where the MDC's MDC-OSes run. MDCs share and compete for CPU resources. If an MDC needs a lot of CPU resources while the other MDCs are relatively idle, the MDC can get more CPU weights. If all MDCs need a lot of CPU weights, the device assigns CPU resources to MDCs according to their CPU weights.

By default, a non-default MDC share the memory space with other MDCs and can use all free memory space. You can use the limit-resource memory command to limit the amount of memory space that each MDC can use, including the default MDC.

When an MDC is created, the device creates a directory for the MDC on the storage medium to save the MDC's files, such as configuration files and log files. By default, MDCs on a device share and compete for the device’s storage space. You can use the limit-resource disk command to assign disk space percentages to MDCs.

Each MDC has its own Layer 2 ports, MAC address entries, and VLAN resources. As shown in Figure 5, Layer 2 ports P1 and P2 belong to MDC A and MDC B, respectively.

VLANs on different MDCs can use the same VLAN ID. For example, both MDC A and MDC B can have a "VLAN 2."

If you connect a PC with the MAC address MACA to P1 and P2, two MAC address entries are created.

Because P1 belongs to MDC A, the MAC address entry MACA-VLAN2-P1 is created for MDC A on the interface card. The entry is then synchronized to all the other interface cards where the other ports in the same VLAN of MDC A reside.

Because P2 belongs to MDC B, the MAC address entry MACA-VLAN2-P2 is created for MDC B on the interface card. The entry is then synchronized to all the other interface cards where the other ports in the same VLAN of MDC A reside.

The two entries are independent of each other.

Figure 5 Layer 2 forwarding within an MDC 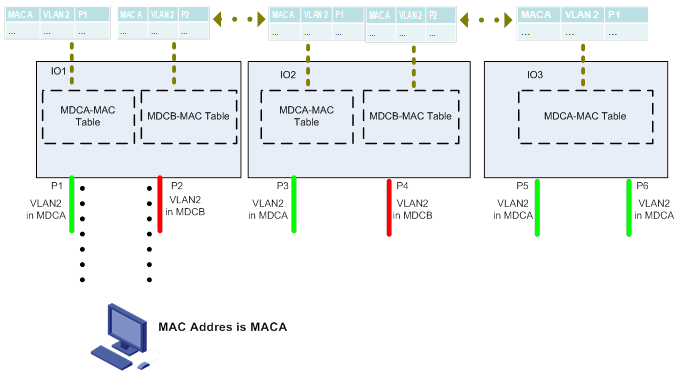 Layer 2 protocols, such as MSTP and LACP support virtualization. They determine that each MDC is a standalone device and assign different MDCs different bridge MAC addresses for MSTP calculation. LACP aggregation cannot occur across two MDCs because they are considered different devices.

Figure 6 Layer 3 forwarding with an MDC

Each VPN on an MDC maintains its own Layer 3 FIB entries.

Rational allocation of resources among MDCs makes entries isolated and each MDC get more entries, which equals to enlarging the specifications of the physical device. 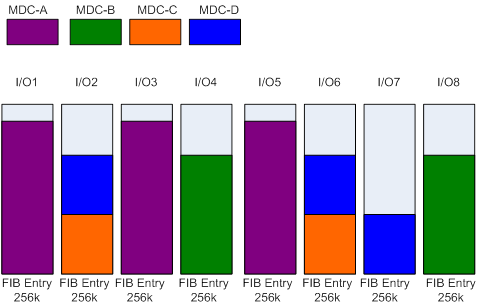 As shown in Figure 8, the user of MDC 2 manages MDC 2 by establishing a connection through the virtual management interface of MDC 2. 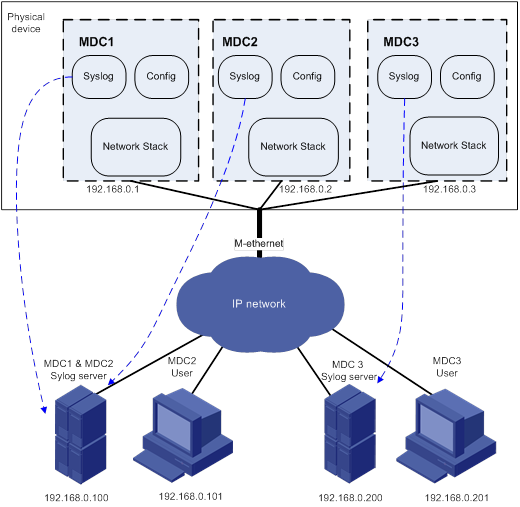 As shown in Figure 8, each MDC has a separate configuration module, provides a separate CLI and a separate Web interface, and supports SNMP access. Administrators of an MDC can access the MDC through the virtual Ethernet management interface of the MDC.

The syntaxes and execution effects of commands provided by an MDC are the same as those provided by a standalone device.

Upon a device-level change, such as installation, removal, or restart of an MPU, a piece of syslog information is created on each MDC.

Comware V7 manages user rights based on user-roles. After you assign user roles to a user, the user can execute only commands allowed by the user roles.

As shown in Figure 9, an MDC-capable device provides four user roles, which fall into two levels:

network-admin—Manages all functions and resources of the device, and creates or deletes MDCs.

network-operator—Displays the operation of all functions and the usage of all resources, switches from the default MDC to a non-default MDC, and displays the resources on the MDC.

mdc-admin—Manages all functions and resources of the MDC. This user role does not provide the right to create/delete MDCs or switch to another MDC.

mdc-operator—Displays the operation of all functions and the usage of all resources on the MDC.

A non-default MDC supports only the two MDC-level user roles, and operations of a login user is effective only for the MDC itself. Other MDCs are not affected.

Each MDC can add its own users. The administrator of an MDC can log in to and manage only this MDC. The management and configuration of an MDC does not affect any other MDCs. This simplifies the management environment and reduces the difficulty of maintenance. 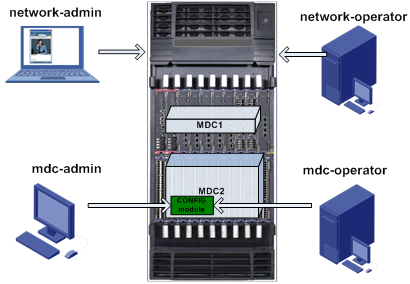 IRF is an N:1 virtualization technology that virtualizes multiple devices into one logical fabric.

Comware V7 supports implementing MDCs on an IRF fabric. You can first merge multiple physical devices into one IRF fabric, and then virtualize the IRF fabric into multiple MDCs.

As shown in Figure 10, connect and configure the four devices to set up an IRF fabric. Then, create three MDCs in the IRF fabric. You can allocate all physical resources of IRF member devices among the MDCs.

High device efficiency—IRF-based MDC allows you to integrate device resources to the maximum extent and virtualize the devices into MDCs as required.

High system availability—Using both virtualization technologies together, you can obtain benefits of both technologies. For example, IRF-based MDC enables each MDC to get the 1:N redundancy protection.

High system expandability and resiliency—You can add more ports, more bandwidth, and more processing capability to the IRF fabric, increasing the capabilities of IRF-based MDCs without changing the network deployment. To deploy MDCs in an IRF application scenario, you can configure MDCs on the IRF fabric, without affecting existing networks or redeploying the existing networks.

Figure 11 MDCs in an IRF fabric 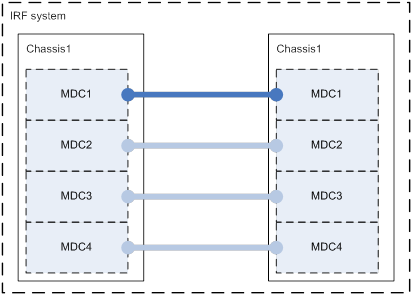 For a process-based service, an MDC starts an active process on the active MPU and one standby process on each standby MPU. Each MDC has a separate, build-in high-availability control policy. When an active/standby switchover occurs on an MDC, processes of other MDCs are not affected. 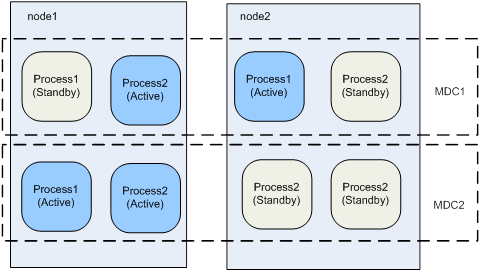 Figure 13 Processes after an active/standby switchover