Metadata that INT can collect 13

Driven by the popularity of networking and the emergence of new technologies, networks have grown radically in size and deployment complexity. Users also have increasingly high demands for service quality. The demands require network operations and maintenance should be more refined and intelligent. Operations and maintenance personnel are facing the following challenges:

·     Granular monitoring—To have a complete and accurate picture of the network, operations and maintenance personnel must monitor more data types with a high degree of granularity. In this way, they can predict the faults that might occur and base network optimization on the collected data. In addition to interface traffic statistics, per-flow traffic loss, CPU usage, and memory usage, operations and maintenance personnel must monitor per-flow delay and jitter, delay of each packet on its transmission path, and buffer usage on each device.

·     SNMP and CLI use a pull model to request information from a device, which limits the number of monitored devices and the speed of obtaining information.

·     Although SNMP traps and logging use a push model to automatically obtain information from a device, the obtained information is limited to events and alarms and cannot accurately reflect network status.

Telemetry is a remote data collection technology that monitors device performance and faults. It uses a push model to obtain rich sets of data and help rapidly locate faults.

Telemetry has the following benefits:

·     A variety of implementation methods.

·     Finer granularity and more types of data to be collected.

·     Compared with the traditional network monitoring technology featuring one query, one reporting, telemetry requires only one-time configuration for continuous data reporting, thereby reducing the request processing load of the device.

As shown in Figure 1, a telemetry network contains the following components:

·     Collector—Receives and stores the data from a network device.

·     Analyzer—Analyzes and processes data collected by the collector and presents them to users in a GUI interface.

·     Controller—Manages a network device by deploying configurations to it through NETCONF or other means. It can deploy configurations or adjust the forwarding behaviors of the device based on the analyzed data. Additionally, it can control which data is sampled and reported by the device. 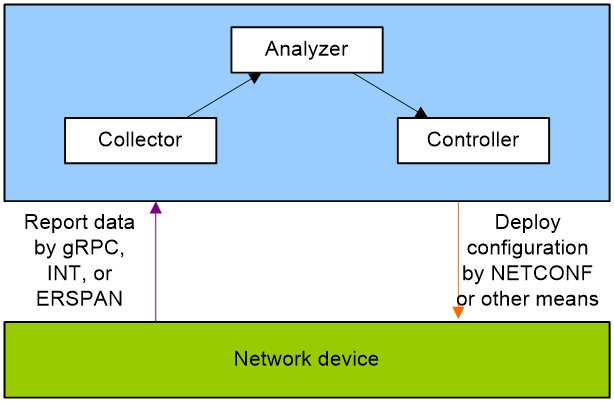 Depending on the data reporting mode, telemetry is divided into the following types:

gRPC is an open-source, high-performance RPC framework that uses HTTP 2.0 for transport. gRPC supports a variety of programming languages to configure and manage network devices.

gRPC-based telemetry can collect interface traffic statistics, CPU usage, alarm information and more. It uses protocol buffers to encode collected information and then report it to the collector.

Proposed by Barefoot, Arista, Dell, Intel, and VMware, INT is a network monitoring technology designed to collect data from the device. The device proactively sends data to a collector in real time for device performance monitoring and network monitoring.

ERSPAN encapsulates mirrored packets into GRE packets with protocol number 0x88BE and sends them to a remote monitoring device.

You can define the packets to be mirrored according to your actual requirements. For example, you can mirror TCP three-way handshake messages to monitor TCP connection setup or mirror Remote Direct Memory Access (RDMA) signaling messages to monitor the RDMA session state. 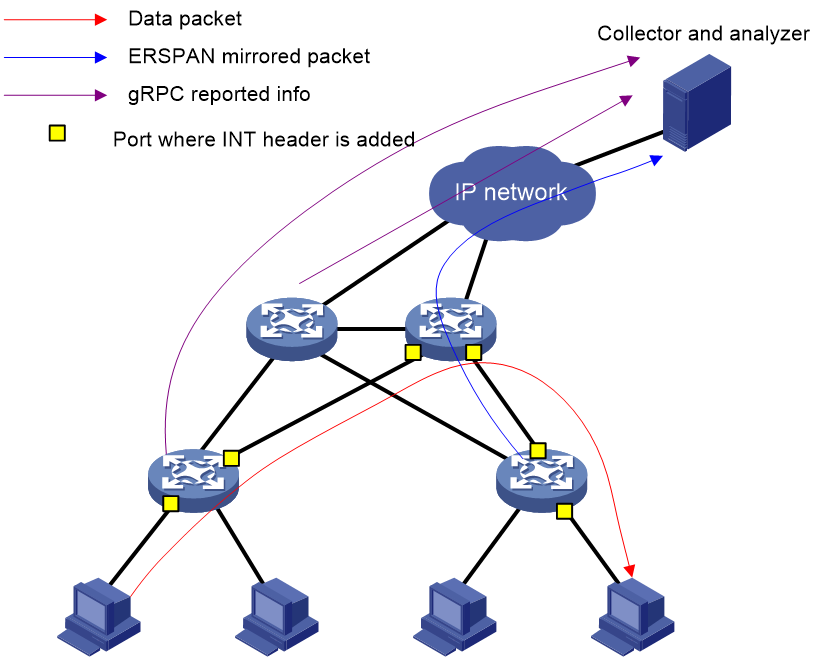 As shown in Figure 3, the gRPC protocol stack contains the following layers:

·     gRPC layer—Defines the protocol interaction format for remote procedure calls. The definitions of the public RPC methods are provided in public .proto files, for example, grpc_dialout.proto.

¡     Google Protocol Buffers—A high-performance binary data format that uses proto definition files to describe the data structures used by the code. During data transmission between the device and a collector, this code format supports carrying more information than other formats, for example, JSON.

The device does not support service data in Google Protocol Buffers format in the current software version.

¡     JavaScript Object Notation (JSON)—A lightweight data-interchange text format that is language independent. JSON is easy for humans to read and write and easy for devices to parse and generate.

To decode data correctly, a device and a collector must use the same proto definition files. 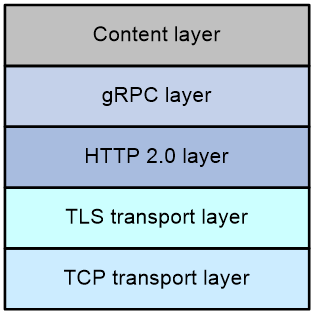 As shown in Figure 4, the gRPC network uses the client/server model. It uses HTTP 2.0 for packet transport.

1.     The gRPC server listens to connection requests from clients at the gRPC service port.

2.     A user runs the gRPC client application to log in to the gRPC server, and uses methods provided in the .proto file to send requests.

3.     The gRPC server responds to requests from the gRPC client.

The device can act as the gRPC server or client.

The device supports the following modes:

·     Dial-in mode—The device acts as a gRPC server and the collectors act as gRPC clients. A collector initiates a gRPC connection to the device to subscribe to device data.

Dial-out mode applies to larger networks where a large number of devices need to be monitored.

You can define data structures in a proto definition file. Then, you can compile the file with utility protoc to generate code in a programing language such as Java and C++. Using the generated code, you can develop an application for a collector to communicate with the device.

The following are the contents of the grpc_service.proto file:

message GetJsonReply { // Reply to the Get method

The following are the contents of the Device.proto file, which defines the RPC methods for the Device module:

} // Method for obtaining physical entity information of the device

The grpc_dialout.proto file defines the public RPC methods in dial-out mode. The following are the contents of the file:

message DialoutResponse{  // Response from the collector. Reserved. The value is not processed.

In dial-in mode, the device can provide data of the following service modules: Device, Ifmgr, IPFW, LLDP, and Syslog. For more information, see the proto definition files provided by H3C.

In dial-out mode, the device can provide data sampled by using one of the following sampling methods:

To view the types of service data that can be sampled in dial-out mode, execute the sensor path command and read the online help.

Ping and tracert utilities can monitor the network delay and path, but they cannot accurately determine on which interface a packet is longest delayed in a delay-sensitive network.

As an important part of the network visibility solution, INT is the first and the most important step in the journey towards automated operations and maintenance. With INT, we can know information about each device a packet traverses, egress/ingress port and queue information, timestamp information, and more.

INT-based telemetry has the following benefits:

·     QoS policy support for flexibly matching packets to be monitored.

·     Support for encapsulating and sending packets to the collector on the last node.

·     Finer granularity of data collected: You can collect information about each device a packet traverses, egress/ingress port and queue information, timestamp information, and more.

INT is defined in the IETF's Internet Draft Inband Flow Analyzer draft-kumar-ifa-00. This draft describes the formats of the INT header and metadata in detail. Theoretically, network devices that support this draft can implement INT packet analysis and processing functions.

As shown in Figure 5, an INT-based telemetry network contains the following components:

The entry node samples packets and mirrors sampled packets to the INT processor, adds an INT header and metadata to the packets, and sends them to the transit node.

An original TCP packet is called an INT-over-TCP packet after it is mirrored and inserted with an INT header.

An original UDP packet is called an INT-over-UDP packet after it is mirrored and inserted with an INT header. 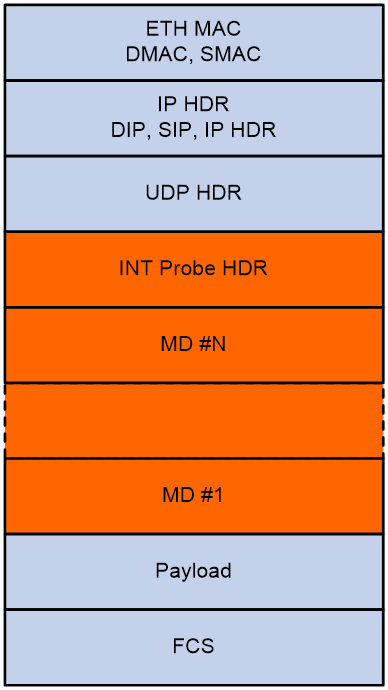 Figure 8 shows the format of the inherent header.

·     Probe Marker—Used by the device to identify INT packets. Its value is fixed at 0xaaaaaaaabbbbbbbb.

·     Hop Count—Number of nodes the packet has traversed.

·     Maximum Length—Maximum length of metadata that can be collected, in bytes.

·     Current Length—Length of metadata that has been collected, in bytes.

·     Sender's Handle—Set by the entry node for the collector to uniquely identify an INT flow.

·     Sequence Number—Sequence number of a packet in an INT flow.

Figure 9 shows the format of the metadata.

·     Entry node—By using a QoS policy on the ingress port, the entry node classifies incoming traffic and mirrors classified traffic to the INT processor. The INT processor adds the inherent INT header to matching packets, adds metadata, and forwards the packets by looking up the routing table.

·     Transit node—The transit node automatically identifies INT packets, adds metadata to them, and forwards them by looking up the routing table.

b.     Encapsulates the outer UDP header for the INT packets.

c.     Encapsulates the outer IP header for the INT packets by using the configured encapsulation parameters.

d.     Routes the packet to the collector according to the destination IP address in the outer IP header.

Metadata that INT can collect

INT can collect and monitor the following metadata:

·     Egress timestamp—The local time on the device when a packet leaves the egress port.

¡     Queue ID—ID of the queue that caches original packets.

As a Layer 3 remote monitoring technology, ERSPAN allows you to copy traffic on ports, VLANs, or CPUs and sends the copied traffic to a remote monitoring device through a GRE tunnel. You can analyze the traffic (mirrored packets) for monitoring and troubleshooting purposes.

As shown in Figure 10, an ERSPAN-based telemetry network contains the following components:

·     Source device— The device where the mirroring sources reside is called a source device. 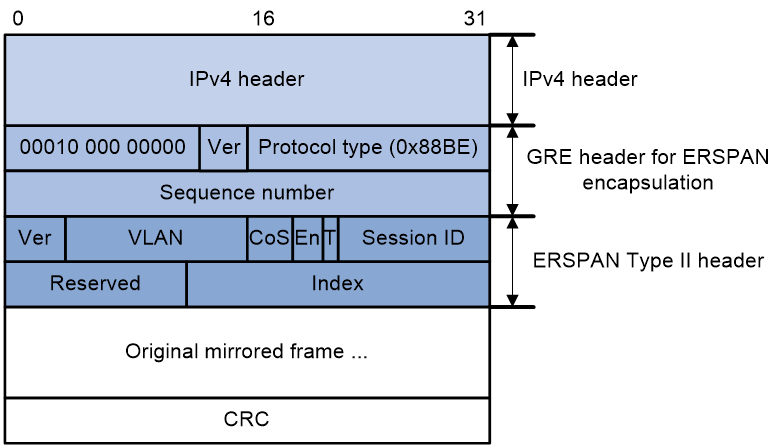 ERSPAN adds an ERSPAN header, recalculates the CRC, and adds a GRE header and an IPv4 header for mirrored packets.

The meanings of fields in the GRE header and ERSPAN header are described as follows:

¡     Flags— The S bit is 1, which indicates that a packet can be determined as an in-order or out-of-order packet through the sequence number. All other bits are 0.

¡     CoS—The original class of service in the mirrored packet.

¡     T— The value 1 indicates that the mirrored packet was fragmented when being encapsulated in ERSPAN because it exceeded the interface MTU.

¡     Session ID—ERSPAN session ID. This ID must be unique for the same source device and destination device.

¡     Index—Index for the source port and mirroring direction.

As shown in Figure 12, ERSPAN mirrors packets in the following procedure:

1.     The source device replicates a packet received on a source port, source VLAN, or source CPU.

2.     The source device adds ERSPAN encapsulation for the replicated packet, with 20.1.1.1 as the source IP address and 40.1.1.2 (IP address of the monitoring device) as the destination IP address.

3.     The source device sends the replicated packet to the monitoring device through a GRE tunnel.

4.     The monitoring device decapsulates the packet and analyzes the contents of the packet.