The expansion of networks requires an increasing number of access devices at network edges. Managing and maintaining such access devices can be very difficult and time-consuming.

Smart Management Center (SmartMC) provides a network management platform that integrates abundant management and maintenance functions for dispersed network devices at network edges, enabling simplified bulk device management. In a SmartMC network, only one device acts as the commander and the remaining devices all act as members. 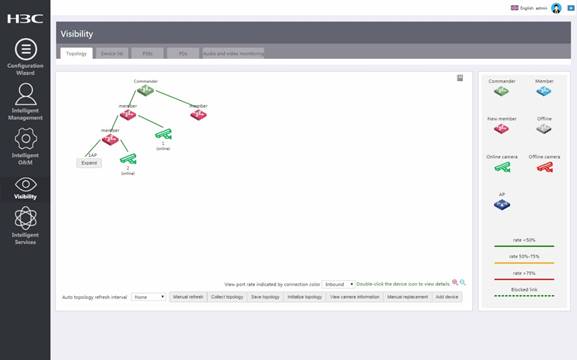 ·     Ease of use—Allows operations from the Web interface without any software installation.

Figure 2 shows the basic framework of a SmartMC network. ·     Commander—Also called topology master (TM), which manages all members in the SmartMC network.

·     Member—Also called topology client (TC), which is managed by the commander.

A SmartMC network can be established automatically or manually.

With SmartMC enabled, the commander scans the Layer 2 network for members, collects and saves member neighbor relations, and displays the topology on the Web interface. A member that starts up without loading any configuration automatically obtains the automatic configuration file from the DHCP server, loads the obtained configurations, and joins the SmartMC network.

¡     Management IP address—Specifies the IP address of VLAN-interface 1 on the commander. The SmartMC network will be established in VLAN 1. 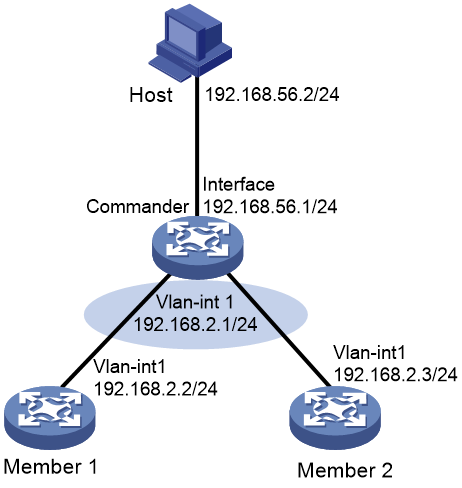 ·     Configure an IP address range in the DHCP address pool for dynamic allocation.

·     Specify the subnet that the VLAN interface of VLAN 1 is in as the subnet for dynamic allocation in the DHCP address pool.

·     Apply the address pool to the VLAN interface of VLAN 1.

·     Set the lease duration in the DHCP address pool to unlimited.

After the configuration, the commander and members use the following procedure to establish a SmartMC network:

1.     The commander broadcasts a SmartMC packet at an interval of 15 seconds to detect members in the network.

2.     When a member receives the packet, it records the commander information, and returns a response packet to the commander.

4.     The commander establishes a connection to the member for tracking the liveliness of the member, and adds the member to the SmartMC network.

5.     Based on the LLDP neighbor information obtained from all members, the commander forms a SmartMC topology.

You can access the SmartMC > Visibility > Topology page to view the topology.

If a device cannot join the network automatically as a member, you can manually add the device to the network from the Web interface of the commander.

Before manually adding a device, make sure you have performed the following tasks on the device:

·     Configure the device to support SNMPv2c and set the read-only community string to public.

To manually add a device, access the SmartMC > Visibility > Topology page, click Add device, and enter the IP address, username, and password of the member. The members can join the network without exchanging SmartMC packets with the commander.

After you specify the information of a member on the commander, the commander performs the following operations to add the member to the network:

·     Verify that the member can be accessed through Telnet.

After the SmartMC network is established, the commander and members check for the existence of each other by exchanging SmartMC packets.

You can use the following methods to replace a faulty member:

¡     The commander obtains the same LLDP information from the new member for three consecutive times.

¡     The new member has the same LLDP information as the faulty member.

¡     The new member has the same model as the faulty member.

The new member will download the configuration file of the faulty member from the file server and run the file to complete the replacement.

If more than one adjacent member fails, automatic replacement does not take effect. You must perform manual replacement.

In an IRF fabric, to avoid IRF split, make sure the IRF configuration and cable connection are the same for the new member and faulty member.

·     Bulk upgrade—Upgrades device version and rolls back configurations in bulk.

You can manage a specific member, members in a specific SmartMC group, or all members. Member grouping can be performed by device type, IP address, and MAC address.

2.     Members download the image file from the file server and perform upgrades.

3.     Members send SmartMC unicast responses to the commander to report the upgrade results.

4.     The commander sends confirm packets to the members.

¡     Automatic backup—Enable this feature for the commander and all members in the network to immediately perform a backup. After that, the commander and members back up the configuration file at a user-specified interval.

·     Bulk configuration deployment—Allows you to deploy multiple command lines to members from the commander, eliminating the need to log in to members and configure the commands one by one. The procedure is as follows:

a.     The commander acts as a Telnet client and establishes Telnet connections to the members.

b.     The commander deploys a batch file to the members through Telnet connections and records the deployment result. The batch file is created on the commander and contains command lines to be deployed.

As shown in Figure 4, create SmartMC groups A and B, add member devices to the groups, and configure the commander to manage members by SmartMC group.

You can log in to the Web interface of the commander and perform the following tasks:

·     View information about all members.