Differences between RIPng and RIP· 2

RIP is a distance-vector Interior Gateway Protocol (IGP) developed by the IETF. Easy to configure and manage, RIP is widely used in small-sized IPv4 networks.

To route IPv6 packets, the IETF developed RIPng based on RIP. RIPng has become an important routing protocol used on IPv6 networks.

RIPng operates the same way as RIP except that RIPng contains some modifications to support IPv6.

The following describes how the routers on a RIP network learn the latest routing information from each other:

2.     Upon receiving response messages, the router processes the routing update information in the messages, updates its local routing table, and sends triggered update messages to its neighbors.

By default, a RIP router sends its routing table to neighbors every 30 seconds. RIP uses an aging mechanism to retain only valid routes.

RIPv1 is a classful routing protocol. It advertises messages only through broadcast. Because RIPv1 messages do not carry mask information, RIPv1 can only recognize natural networks such as Classes A, B, and C, and it does not support non-contiguous subnets.

RIPv2 is a classless routing protocol. It has the following advantages over RIPv1:

Differences between RIPng and RIP

A RIPv2 packet can carry a maximum of 25 RTEs. The maximum number of RTEs in a RIPng packet depends on the IPv6 MTU of the sending interface.

As shown in Figure 1, a RIPv2 packet contains a header and multiple RTEs.

As shown in Figure 2, a RIPng packet contains a header and the following types of RTEs:

Figure 3 shows the format of a next hop RTE.

Figure 4 shows the format of an IPv6 prefix RTE:

When the device receives routes with the same destination from multiple neighbors, the device selects an optimal route and one or more suboptimal routes from among all routes by route cost. Suboptimal routing takes effect as follows:

·     When the optimal route is deleted because of link failure, suboptimal routing immediately takes effect.

As shown in Figure 5, a school deploys a small-sized IPv6 network. All routers and hosts on the network run IPv6.

On this small-sized network, run RIPng between the nodes on the network for them to automatically adapt to topology changes. 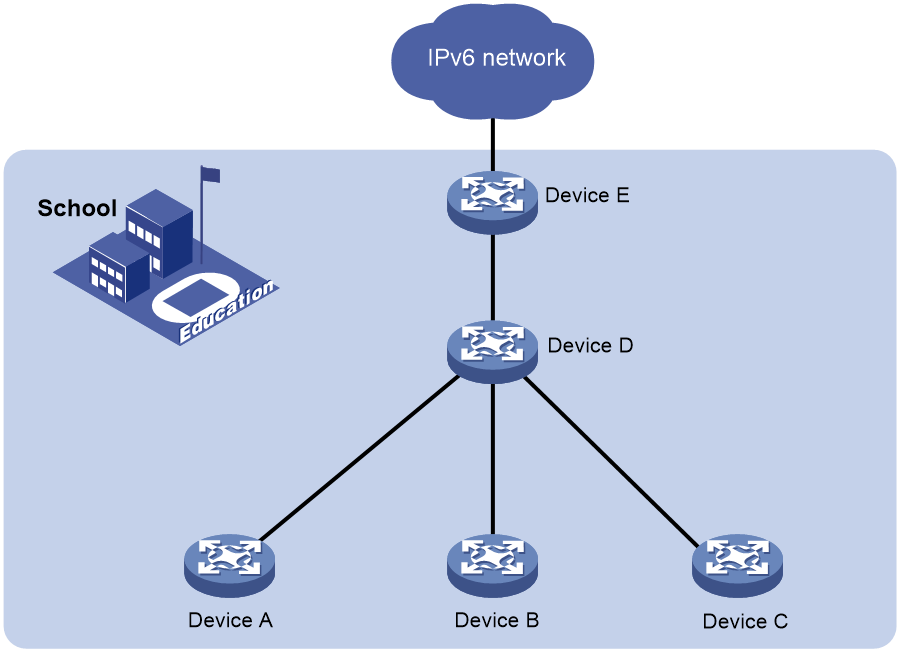