Connecting a LAN to the Internet using an ADSL modem·· 9

Among numerous access technologies, Ethernet access is economical, and PPP can provide good access control and accounting functions. Combining the economy of Ethernet and the good scalability and management & control functions of PPP, Point-to-Point Protocol over Ethernet (PPPoE) was introduced.

Because PPPoE well solves the practical application problems such as user management and network access accounting, PPPoE is widely recognized and used by service providers.

·     Adopting the traditional dial-up access mode, which allows end users to use the familiar hardware and similar software to access the Internet.

·     Compatible with all the existing xDSL modems. No complicated configurations are required on the clients’ xDSL modems.

·     Allowing service providers to authenticate end users with the access control function, perform accounting with the accounting function, and monitor user behavior so as to ensure network security.

As shown in Figure 1, the PPPoE session is established between routers (Router A and Router B). All hosts share one PPPoE session for data transmission without being installed with PPPoE client dialup software. This network structure is typically used by enterprises. An enterprise can one account to access the Internet. 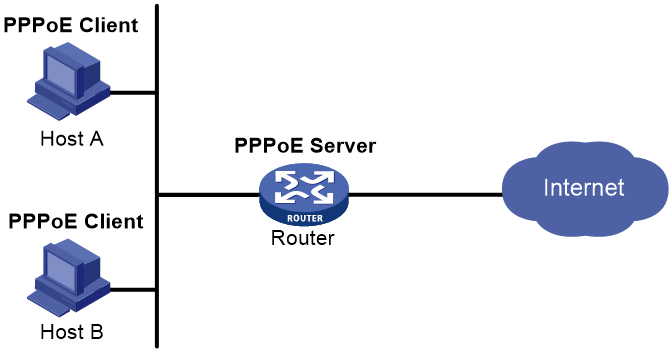 A PPPoE packet is a PPP packet encapsulated in an Ethernet frame, as shown in Figure 3. The field descriptions are as follows:

·     Session_ID—Unique identifier of a PPP session, 16 bits in length. It is fixed for a given PPP session and in fact, defines a PPP session together with the Source_address and Destination_address fields. The value 0xffff is reserved for future use and must not be used.

As shown in Figure 4, the major fields in a PADI packet are as follows:

As shown in Figure 5, the major fields in a PADO packet are as follows:

As shown in Figure 6, the major fields in a PADR packet are as follows:

As shown in Figure 7, the major fields in a PADS packet are as follows:

·     The SESSION_ID value is the one determined during the Discovery stage.

As shown in Figure 8, the major fields in a PADT packet are as follows:

·     The SESSION_ID value is the one determined during the Discovery stage. When the discovery stage is over, both peers know the PPPoE session ID and the MAC address of the peer, which together determine a unique PPPoE session.

1.     The PPPoE client broadcasts a PADI packet that contains information about the service type it requests.

2.     After receiving a PADI packet that it can serve, a PPPoE server replies with a PADO packet. The destination address of the PADO packet is the unicast packet of the host that sent the PADI.

4.     The PPPoE server generates a unique session ID for the session and sends the session ID to the PPPoE client through a PADS packet. The session will thus be established and PPPoE moves on to the Session stage.

The PPP negotiation for a PPPoE session can be further divided into the following three stages, including LCP, authentication, and NCP:

1.     LCP is a stage where parameters used to establish, configure, and test the data-link connection are negotiated.

3.     After the authentication succeeds, PPP enters the NCP stage where different network layer protocols are configured. The PPPoE server and client typically use the IP Control Protocol (IPCP) to configure IP addresses and DNS server information for end users.

In the Session stage, all Ethernet data packets are sent in unicast mode.

In PPPoE Session stage, the PPPoE server and client both can terminate the PPPoE connection by sending a PADT packet in unicast mode at any time. After sending or receiving a PADT packet, PPP traffic, even normal PPP termination packets, is not allowed to be sent using the session.

Connecting a LAN to the Internet using an ADSL modem

As shown in Figure 10, the enterprise wishes that all its employees access the Internet using a common account:

·     Router A serves as the PPPoE client and accesses the Internet with an account, which is the common account used by all the employees to access the Internet.

·     Router B serves as the PPPoE server. It connects to a DSLAM on one end, providing functions such as RADIUS authentication and accounting, and to the Internet on the other end. As shown in Figure 11, the APs serve as PPPoE clients and the broadband remote access server (BRAS) serves as the PPPoE server. End users access the Internet through wireless networks.