Configuring the hold off timer 16

This section covers these topics:

·           Quick protection mechanism, and 50-ms self healing with topology protection

·           Traffic level guarantee based on bandwidth reservation and rate limiting

·           Bandwidth sharing fairness among stations on the ring

RPR is made up of dual unidirectional counter-rotating ringlets identified as Ringlet 0 and Ringlet 1, as shown in Figure 1. 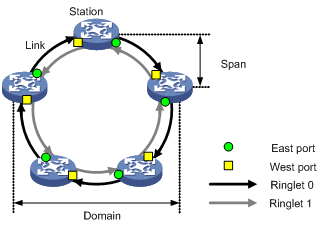 Any two adjacent stations are connected by a pair of unidirectional logical channels called “links” transmitting in opposite directions. These two links form a span. Multiple continuous spans and their stations form a domain. A span on which data frames are not allowed to pass is called an “edge.” If a ring contains at least one detected edge, it is called “open ring.” If it does not contain any detected edges, it is called “closed ring.”

Stations on an RPR handle data frames by performing the following four types of operations: 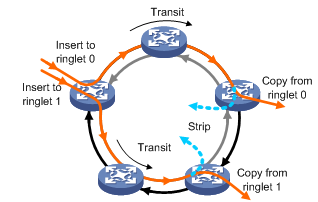 Figure 2 shows how a unicast data frame is transmitted on an RPR ringlet:

1.      The source station inserts the unicast frame into the data stream on Ringlet 0 or Ringlet 1.

3.      The frame is copied and stripped when it reaches the destination station or when its time to live (TTL) expires. 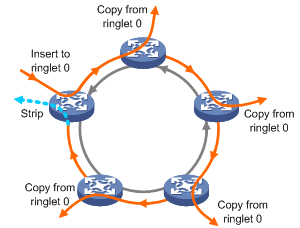 Figure 3 shows how a broadcast, multicast, or unknown unicast frame is transmitted on an RPR ringlet:

1.      The source station inserts the frame into the data stream on Ringlet 0 or Ringlet 1.

2.      Transit and destination stations copy and transit the frame if the TTL of the frame has not expired.

3.      The frame is stripped when it returns to the source station or when its TTL expires.

RPR performs automatic topology discovery to collect such information as the number of stations, ring state, and order of the stations on the ring to build a topology database. This database does not change after the ring topology becomes stable.

Each RPR station maintains a topology database that describes the topology of the entire RPR ring. Based on this database, the station creates its ringlet selection table.

·           Ringlet topology information, such as the number of stations, ring state, and available bandwidth.

·           ATD frames convey attributes of the local station such as the MAC address and station name. These attributes will be included in the topology database.

·           TC frames convey topology checksum information. They are sent between adjacent stations to check whether the topology databases on them are synchronized, identifying stability of the RPR ring topology.

·           When a station on the ring starts initializing or detects a topology change, it sends TP frames to propagate topology information throughout the network. When doing that, it sends the first nine TP frames at fast intervals and subsequent TP frames at slow intervals.

·           After the RPR ring topology converges, the station starts to send TC frames. When doing that, it sends first five TC frames at fast intervals and then subsequent TC frames at slow intervals.

·           Only one type of interval is available for sending ATD frames, regardless of topology change.

RPR delivers strong self-recovery capability. Its protection mechanism provides event detection, quick self-recovery, and fast service recovery when faults occur to the fiber-optic or stations. The network can then detect faults quickly and react appropriately to restore services in 50 ms.

The passthrough approach mainly applies to handle station faults. When a station detects an internal fault, it can enter the passthrough state in which it behaves like a repeater and does not handle any services on the ring. Frames arriving at this station are forwarded directly as if it was transparent, and the station is invisible on the ring. Station B shown in Figure 4 is an example. 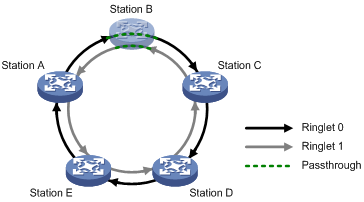 If a station is unable to forward traffic as the result of power failure or fiber cut for example, it should enter protection mode. RPR provides the following protection modes:

·           Wrapping—After a span or station fails, protected traffic is directed at the point of failure to the opposing ringlet. The two ringlets (Ringlet 0 and Ringlet 1) then form a closed single ring around the point of the failure. The wrapping mode minimizes the data frame loss, because the wrapping mode allows quick switchover, However, this mode wastes bandwidth.

·           Steering—The two stations at the two sides of a point of failure update their topology databases, and then send TP frames at fast intervals to the other stations on the ring. After a new topology database is stabilized, the source station directs protected frames to the ringlet that retains connectivity to their destinations. The steering mode can avoid the bandwidth waste. However, it can cause frame loss and service interruption because it requires topology reconvergence.

Figure 5 Schematic diagram before and after protection switchover As shown in Figure 5, traffic travels from station D to station B along Ringlet 0. The transmission path is station D—station E—station A—station B. After the span between station A and station E fails, a protection switchover occurs.

·           In wrapping mode, traffic that should originally travel from station E to A along Ringlet 0 is directed to Ringlet 1 to reach station A. The new transmission path is station D—station E—station D—station C—station B—station A—station B.

·           In steering mode, traffic that should have traveled from station D to station B along Ringlet 0 is steered to Ringlet 1 for transmission. The new transmission path is Station D—Station C—Station B.

·           The MS request sent by a station will not be processed if a higher priority protection request is present on the RPR ring.

·           If an FS request is present on the current ring, the SF or SD request automatically sent as the result of a link failure will be processed only after the FS request is cleared.

·           If the two RPR physical ports are located on the same subcard, RPR is centralized.

·           If the two RPR physical ports are located on different subcards, RPR is distributed.

The differences between distributed RPR and centralized RPR lie in that:

·           In centralized RPR, when the subcard where the two RPR physical ports are located goes down, the RPR station fails.

·           In distributed RPR, the down event of one subcard can cause the RPR physical port on the card to go down and edge to the RPR station. The RPR station can still work in protection mode to restore services in 50 ms.

·           In distributed RPR, if two RPR physical ports are on the same RPR station, you must connect their mate ports with an optical fiber first for the RPR station to forward traffic.

As described earlier, an RPR station comprises a pair of RPR physical ports, one is called the “east port” and the other is called the “west port.” Initially, the two ports were fixed on the router. The RPR station could become unusable for the impairment of either port. To address the issue, the RPR logical interface was introduced.

For a distributed RPR station to work, do the following:

2.      Bind the RPR physical ports with the RPR logical interface:

¡  For the RPR station to forward traffic, before binding two RPR physical ports with the same RPR logical interface, you must connect their mate ports.

All calculation concerning the operation of RPR is done on the master port, and the calculation result is synchronized to the slave port for consistency. Examples of RPR-related calculation include execution of configuration commands, protection event processing, and RPR frames sending for topology discovery.

To configure an RPR XGE interface:

To configure an RPR POS interface:

To create and configure a Layer 3 RPR logical interface:

For an RPR station to forward traffic, before binding its two RPR physical ports with the same logical RPR interface, you must connect their mate ports.

When the two RPR physical ports are on the same subcard (centralized RPR), you can enable the RPR mate port smart connection function. With the function enabled, RPR automatically connects the two mate ports without you having to connect them manually.

To change the RPR physical port type on an RPR logical interface:

To assign a name to the RPR station:

To configure the protection mode on the RPR station:

·           In revertive mode, a station resumes the idle protection state once the WTR timer expires.

·           In non-revertive mode, the station remains in automatic protection state upon expiration of the WTR timer and does not resume the idle state until a higher protection request is present on the ring.

To configure the RPR protection reversion mode on the RPR station:

To send a protection request:

·           Static ringlet selection table is administratively configured to specify the ringlet for delivering a frame to a destination station.

To add an entry to the static ringlet selection table:

To configure the default ringlet selection:

By configuring the RPR fairness algorithm, you can better guarantee the transmission quality over RPR rings.

RPR traffic fall into three classes: class A, class B, and class C, with decreasing priorities.

·           Traffic of class C is regulated by the fairness algorithm and takes the lowest priority.

To configure reserved bandwidth or rate limit for a certain traffic class:

On an RPR ring, bandwidth resources are shared among stations. When traffic size is small, RPR can handle bandwidth requests of all stations on the ring well. When traffic size gets heavy, congestion may occur. To prevent some stations from taking advantage of their spatially or chronologically favorable position on the ring to occupy excessive bandwidth, RPR adopts a fairness algorithm to ensure bandwidth allocation fairness.

The fairness algorithm of RPR mainly regulates class B-EIR and class C traffic on the RPR ring. You can assign a weight to a station to adjust the ratio of its available service bandwidth to the total non-reserved bandwidth on a ringlet. The fairness weight of a station is configured as an exponent of 2.

To configure the fairness weight of an RPR station on a ringlet:

These are the RPR timer configuration tasks:

The ATD timer defines the interval at which attribute discovery frames are sent.

To configure the ATD timer:

Configuring the hold off timer

The hold off timer defines the delay for the physical layer to report a protection request after detecting a link failure.

To configure the hold off timer:

A station sends single choke fairness frames (SCFFs) periodically to notify the neighbor stations of its normal operation state. When a station fails to receive an SCFF, a keepalive timer starts. If no SCFF frame is received after the timer expires, the station sends an SF protection request.

To configure the keepalive timer:

To configure the topology stability timer:

To configure the TC timers:

To configure the TP timers:

To configure the WTR timer:

To test the connectivity to a specific RPR station:

As shown in Figure 6:

·           Bind the RPR physical ports to the logical interface on each station.

The configuration steps on Station B, C, D, and E are similar to those on Station A and not shown.

# Display the RPR topology summary on Station A.

The topology information shows that the RPR ring is closed.

As shown in Figure 7, Stations A through E form an RPR ring and work in steering protection mode by default.

·           Configure a static ringlet selection entry to allow frames from Station A to Station B to travel Ringlet 1 when no edge occurs on the RPR ring (that is, the ring remains closed). # Create Layer 3 RPR logical interface RPR 1 on Station A, and configure the protection mode as wrapping on the interface.

The configuration steps on Station B through Station E are similar to those on Station A and not shown.

# On Layer 3 RPR logical interface RPR 1 of Station A, configure transmitting frames destined for Station B through Ringlet 1.

# Display the static ring selection table information on Station A.

# Display the information about the overall ring selection table on Station A.