Located west of the Great Hall of the People, China's National Grand Theater is a titanium-and-glass modern architectural masterpiece. Surrounded by an artificial lake, this instantly recognizable ovoid building is not only the country's premiere performance art center; it is also a symbol of China embracing the future at the beginning of a new millennium. This contemporary colossus contains an opera house, music hall and drama hall, as well as public spaces including plazas, shopping areas and restaurants.

As a showpiece of modern design and function, National Grand Theater requires a highly available, highly reliable network for its ticketing system, intelligent building automation system and to provide Internet access for public and private areas.

Wireless connectivity was the natural solution to preserve the aesthetic appeal of National Grand Theater's detailed, intricate design—to ensure networking cables would not interfere with the serenity and beauty of the site—and to address issues raised by the center's complex, cast-concrete underground construction, which degraded signal quality of mobile phones and PASs (personal access system). Additionally, for public safety, surveillance cameras needed to be deployed in locations where wiring would be exceptionally challenging.

In response to these diverse challenges, H3C designed an integrated wired/wireless Fit Access Point (AP) solution consisting of S9500 Plug-in Access Controllers (ACs) and WA2110 APs. Using these as a base, the resultant wireless network would be able to simultaneously support a wide range of services, including IP telephony, wireless positioning, wireless monitoring and wireless multimedia playing.

To ensure the reliability and availability of the network, H3C's solution provided carrier-class redundancy: the S9500 AC card has the same high-reliability features of H3C® S9500 Series 10-gigabit core switches. Furthermore, each AP establishes a management tunnel and registers with two ACs at a time; once the communication between an AP and the active AC is interrupted, the AP immediately switches traffic to the standby AC. Additionally, the AC cards of two S9500 Series switches can be configured to work in a load-sharing mode through the command-line interface (CLI). In this scenario, should an AC card become faulty, the other AC card immediately takes over its work managing all network APs.

Faced with a complex network architecture, H3C provided a wireless LAN (WLAN) with RFID to deliver advanced wireless positioning, enabling mobile terminals such as mobile PCs, PDAs and Wi-Fi® mobile phones to be deployed throughout the network rather than through separately installed clients. Among the many other benefits it delivers, such a solution ultimately improves the maintenance efficiency of the theater significantly. 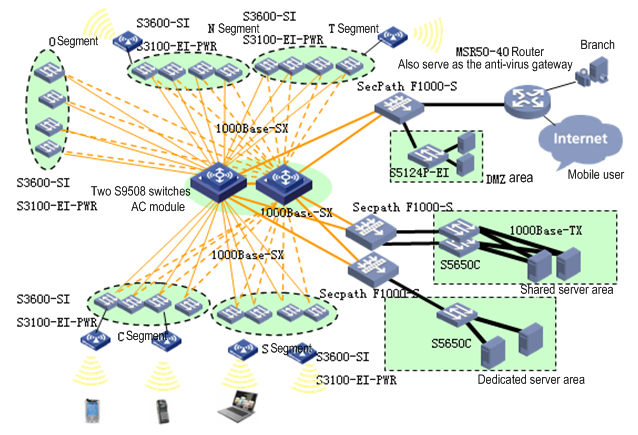 Since the network carries interior office administration, voice and monitoring services, and provides Internet access for the public and mass media, robust networking security is essential. H3C's solution safeguards data traffic through a number of applications: