Inter-Process Communication (IPC) is a reliable communication mechanism among different nodes. The following are the basic concepts in IPC.

An IPC node is an independent IPC-capable processing unit, typically, a CPU.

·           An Intelligent Resilient Framework (IRF) virtual device is an interconnection of several centralized routers, with each member router corresponding to one or more nodes. Therefore, an IRF virtual device corresponds to multiple nodes.

IPC links are created when the system is initialized. An IPC node, upon startup, sends handshake packets to other nodes. If the handshake succeeds, a connection is established.

The system uses link status to identify the link connectivity between two nodes. An IPC node can have multiple links, each having its own status.

Data of an upper layer application module is sent to the IPC module through a channel, and the IPC module sends the data to a peer node through the link. The relationship between a node, link and channel is as shown in Figure 1.

Figure 1 Relationship between a node, link and channel 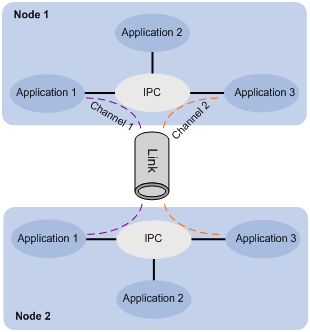 IPC supports three packet sending modes: unicast, multicast (including broadcast, a special multicast), and mixcast, each having a corresponding queue. The upper layer application modules can select one as needed.