With the fast development of the Internet, two issues were introduced:

·          The increase of networks and network devices makes it hard for the administrators to monitor the status of all the devices in time, and find and correct network faults.

·          Network devices might be from different vendors. If each vendor provides an independent set of management interfaces (for example, command lines), network management might become more and more complicated.

To solve the above mentioned issues, a set of standards (SNMP) covering service, protocol and management information base (MIB) is introduced.

SNMP is an application-layer protocol between an NMS and several agents. It defines the standardized management framework, common languages in communication, security and access control mechanisms used in monitoring and managing devices in a network. The administrators can query device information, modify device parameters, monitor device status, and enable automatic detection of network faults and generation of reports by using SNMP.

·          TCP/IP-based standard protocol, with UDP as the transportation layer protocol.

·          Authentication and privacy mechanisms provided in SNMPv3, which enhances security by user based and view based access control function.

An NMS manages an SNMP-enabled network. It uses SNMP to manage and monitor the network devices in the network. An NMS can be a server that manages the network or an application that performs management function on a device.

An NMS can send a request to an agent to query or modify one or more variables. At the same time, the NMS can receive traps sent by the agent to obtain the status of the managed device.

An agent works on a managed device to receive and handle requests from the NMS, and sends notifications to the NMS when events, such as an interface state change, occur.

Upon receiving an NMS request, an agent completes the querying or modification operations, and sends the result to the NMS. If the device fails or other events occur, the agent will send unsolicited traps to the NMS to notify it of the status changes of the device.

A MIB stores variables called "nodes" or "objects" in a tree hierarchy and identifies each node with a unique OID. An OID is a dotted numeric string that uniquely identifies the path from the root node to a leaf node. As shown in Figure 2, the managed object system can be uniquely identified by a string of numbers {1.3.6.1.2.1.1}. This string of numbers is the OID of the managed object system.

A subtree can be identified by the OID of its root node. For example, the OID of the subtree with the root node being private is the OID of node private –– {1.3.6.1.4}. 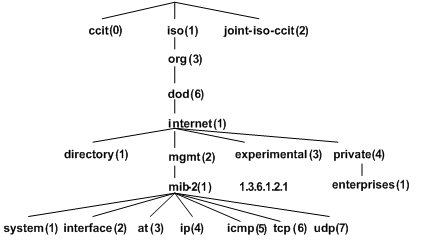 A subtree OID used with a subtree mask defines a view subtree. A subtree mask is in the hexadecimal format. After it is converted to binary bits, each bit corresponds to a node of the OID, where:

·          0 means wildcard match. The OID of the MIB object to be accessed can be different from the subtree OID.

SNMPv1 is the first version of the SNMP protocol, providing a minimum network management function. The Structure of Management Information (SMI) and MIB of SNMPv1 are simple and have many security defects.

SNMPv2c uses community names for authentication. SNMPv2c is compatible with SNMPv1, but supports more operation types such as GetBulk, more data types such as Counter32, and more error codes.

SNMPv3 uses a user-based security model (USM) to secure SNMP communication. You can configure authentication and privacy mechanisms to authenticate and encrypt SNMP packets for integrity, authenticity, and confidentiality.

View-based Access Control Model (VACM) defines five elements, group, security level, context, MIB view, and access policy for user access control. You can define different groups on the same SNMP entity; these groups are bound with MIB views. In addition, you can define multiple users in one group. When a user accesses the management information, he can access only the objects defined by the corresponding MIB view. mode controls access to MIB objects by assigning MIB views to SNMP communities or users.

·          Trap—An agent sends an unsolicited response to report events to an NMS.

·          Inform—An agent sends an unsolicited response to report events to an NMS. The NMS must send an acknowledgement to the agent after receiving an inform packet.

By default, the device sends the first four kinds of packets to UDP port 161, and the agent sends traps and informs to UDP port 162. By using two different port numbers, a single device can act as an agent and an NMS at the same time.

The following packets are defined based on different versions and operations of SNMP. 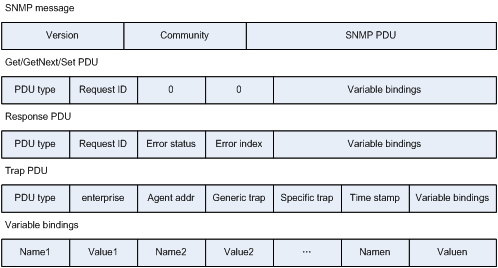 As shown in Figure 4, an SNMPv1 message contains the following fields:

·          Request ID—Matches a response to a request. SNMP assigns a unique ID to each request.

·          Error index—Provides information about the variables that caused the error when an error occurred.

·          Time stamp (the value of sysUpTime)—The amount of time between the time when the SNMP entity sending this message reinitialized and the time when traps were generated.

Compared with SNMPv1, GetBulk packets are added in SNMPv2c. GetBulk operation corresponds to GetNext operation. In a GetBulk operation, the setting of Non repeaters and Max repetitions parameters enables NMS to obtain data of many managed objects from an agent.

In SNMPv2c, the trap message format is different from that in SNMPv1. SNMPv2c trap PDUs use the format of SNMPv1 Get/GetNext/Set PDUs, and sysUpTime and snmpTrapOID are used as variables in variable bindings to create a packet.

The entire SNMPv3 message can be authenticated, and EngineID, ContextName, and PDU are encrypted. RequestID, MaxSize, Flags, SecurityModel, and SecurityParameters form the SNMPv3 message header.

The following describes the main fields in an SNMPv3 message:

·          ContextName—Identifies a context. Each contextName must be unique within an SNMP entity.

·          AuthoritativeEngineID—Specifies the snmpEngineID of the authoritative SNMP engine involved in the exchange of the message, used for identification, authentication and encryption for an SNMP entity. This field refers to the source for a trap, response, or report, and to the destination for a Get, GetNext, GetBulk, or Set operation.

·          AuthoritativeEngineBoots—Specifies the snmpEngineBoots value at the authoritative SNMP engine involved in the exchange of the message. It indicates the number of times that this SNMP engine has initialized or reinitialized itself since its initial configuration.

·          AuthoritativeEngineTime—Specifies the snmpEngineTime value at the authoritative SNMP engine involved in the exchange of the message. It is used for time window check.

·          UserName—Specifies the user (principal) on whose behalf the message is being exchanged. Usernames configured on NMS and Agent must be the same.

·          PrivacyParameters—A parameter used in privacy calculation, for example, the value used for generating the initialization vector (IV) in the DES CBC algorithm. If no privacy is used, this field is null.

SNMPv1 and SNMPv2c use almost the same mechanism. New error codes and GetBulk operation are added in SNMPv2c. The following describes the SNMPv1/v2c mechanisms.

NMS wants to obtain the value of the node sysName of a managed device (the sysName object is in the accessible view), using public as the read community name:

1.        The NMS sends a Get request to the agent, with the version set to 1, community to public, and name 1 in variable bindings in the PDU to sysName.0.

The NMS wants to obtain the value of the node sysLocation next to node sysName of a managed device (the sysName and sysLocation objects are in the accessible view), using public as the read community name:

1.        The NMS sends a GetNext request to the agent, with the version set to 1, community to public, and Name 1 in variable bindings in the PDU to sysName.0.

2.        The agent sends a GetNext response to the NMS. If the operation succeeds, the value of Name 1 in Variable bindings in the response PDU is the next node sysLocation.0 of node sysName.0, and the value of Value 1 is, for example, Beijing China. If the operation fails, the reason for the error will be added to the Error status field, and position will be added to the Error index field.

The NMS wants to set the value of node sysName of the managed device to Device01, using private as the read community name:

1.        The NMS sends a Set request to the agent, with the version set to 1, community to private, Name 1 in variable bindings in the PDU to sysName.0, and Value1 to Device01.

If abnormalities occur on a device, the agent will notify NMS by sending unsolicited traps. For example, if the cable on a port of the device is removed, Agent will send a linkDown trap to the NMS. In the trap, the values of the Version, Community, enterprise, Generic trap fields are 1, public, the value of sysObjectID.0 (for example, enterprises.25506), and linkDown, respectively, and the Variable bindings field contains the interface information.

Compared to the SNMPv1 and SNMPv2c mechanisms, authentication, encryption, and decryption are added in SNMPv3 mechanism. In the following example, Get operations are performed using authentication and encryption.

2.        The agent processes the request, and sends a report, which contains the values of the above parameters.

3.        The NMS sends a Get request again to the agent. In the request, the main fields are set as follows: Version to 3, the parameter values obtained in step 2 are added to the corresponding fields, the value of Name1 field in Variable bindings in the PDU to sysname.0, AuthenticationParameters is calculated by the configured authentication algorithm, PrivacyParameters is calculated by the configured encryption algorithm, and encrypt the PDU data using the configured privacy protocol.

4.        The agent authenticates the Get request first. If the Get request passes the authentication, the agent will decrypt the PDU. If decryption succeeds, the agent will obtain the value of sysName.0, and add the device name (for example, Agent010) to the field Value1 in Variable bindings in the response PDU. If authentication or decryption fails, or obtaining parameter values fails, the error reason will be added to the Error status field, and the error location will be added to the Error index field. At last, Agent will encrypt the PDU, set the parameters contextEngineID, contextName, AuthoritativeEngineID, AuthoritativeEngineBoots, AuthoritativeEngineTime, AuthenticationParameters and PrivacyParameters, and then send a response.

SNMP silence enables the device to automatically detect and defend against SNMP attacks.

After you enable SNMP, the device automatically starts an SNMP silence timer and counts the number of packets that fail SNMP authentication within 1 minute.

·          If the number of the packets is equal to or greater than 100, the SNMP module enters a 5-minute silence period, during which the device does not respond to any SNMP packets. After the 5 minutes expire, the device restarts the timer and counting.

As shown in Figure 12, the vendors of the network devices are different, and device models are different. The NMS uses SNMP to monitor and manage the devices. The devices allow management only from the NMS at 1.1.1.1 and send traps and informs to the NMS when an event occurs. ·          RFC 1155: Structure and Identification of Management Information for TCP/IP-based Internets