As shown in Figure 3, the 1588v2 network architecture includes the following key elements: A PTP domain is a network that runs a PTP profile.

To adapt to complex networking environments, Comware supports also PTP multi-domain, which allows you to assign devices to multiple PTP domains. The clock source, clock information, and time synchronization process of different PTP domains are independent of each other. When a device is added to multiple PTP domains, you must determine an optimal domain, and synchronize the time of the device with the clock source tracked by the optimal domain.

The following clock sources are available for a device:

·     External clock source—Clock signals generated by an external clock device. The signals are received and sent by a 1PPS/ToD port on the MPU.

Grandmaster clock (GMC) is the ultimate source of time for clock synchronization in a PTP domain. It can be manually specified, or elected automatically through the BMC algorithm. Only one GMC exists in a PTP domain, and all devices in the domain are synchronized with this clock.

When a TC node receives a PTP message, it copies and forwards it from all its PTP ports, which will consume large bandwidth on the upstream and downstream nodes, and even cause packet loss. The following types of TC nodes are defined to solve this issue:

·     End-to-End Transparent Clock (E2ETC)—Forwards all received PTP messages. When forwarding a Sync or Delay_Req message, it carries the residence time (used for time offset correction) of the message on the device to the clock node that receives the message. This type of TC nodes is suitable for PTP networks with a small number of clock nodes.

·     Peer-to-Peer Transparent Clock (P2PTC)—Forwards only Sync, Follow_Up, and Announce messages and terminates other PTP messages. When forwarding a Sync message, it carries the residence time of the message on the device and the propagation delay on the link between the device and its upstream node to the clock node receiving the message. (The residence time will be used for time offset correction and the link propagation delay will be used for calculation of the time offset.) Compared with an E2ETC clock node, a P2PTC clock node forwards fewer PTP message types. It is suitable for PTP networks with more clock nodes. However, a P2PTC clock calculates the link delay and performs more complicated data processing than an E2ETC.

·     An OC-type PTP port that is used for time synchronization.

The 1588v2 messages are used for the following purposes:

·     Announce messages—Provide status and characterization information about the transmitting node and its grandmaster. This information is used by the receiving node when executing the best master clock algorithm.

The delay measurement mechanism can run in one of the following two modes:

·     IPv4 UDP transport—The UDP destination port is 319 for a PTP event message and 320 for a PTP general message. Based on the topology between the master and member nodes, you can configure multicast or unicast transport of PTP messages.

¡     In PTP unicast transport mode, the destination IP address of a message is a unicast IP address configured by the user.

A grandmaster clock can be manually specified, or automatically elected through the BMC algorithm. BMC is an algorithm defined by the 1588v2 protocol to determine the master-member relationships between the clocks on the network. Each member clock tracks the frequency and time of its master clock. In case of changes in the network or clocks, the BMC algorithm will re-select the best master clock for frequency and phase synchronization on the entire network. The BMC election process is as follows:

1.     The clock nodes exchange Announce messages and compare the first priority, time class, time accuracy, and the second priority of the clocks carried in the Announce messages in sequence as shown in Figure 4 to select the grandmaster clock.

The master-member/subordinate relationships between the clock nodes (except the TCs) on a PTP network are automatically determined based on the Best Master Clock (BMC) algorithm. You can also manually specify a role for the clock nodes. The member clock uses the formula T(n+1)–Tn / T(n+1)'–Tn' to calculate its frequency ratio with the master clock and adjust its clock frequency accordingly. 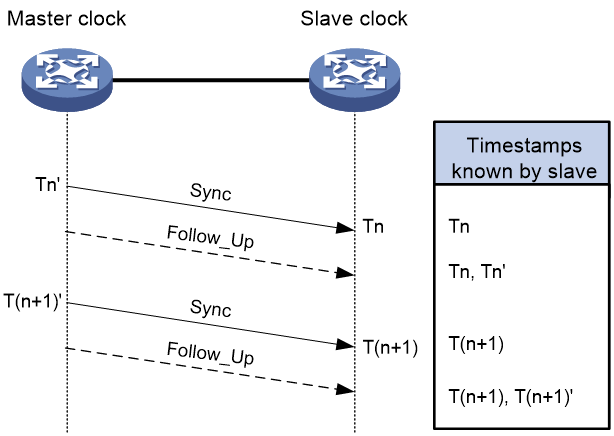 As shown in Figure 7, the time offset can be roughly calculated as Tn–Tn'. However, Tn–Tn' contains the transmission delay of the message on the path. To improve time synchronization accuracy, the time offset is measured and calculated through the following two stages:

1.     Path delay measurement stage—The master and member clocks exchange synchronization messages and record the sending and receiving time of the messages. Based on the timestamps, each member clock calculates the total round-trip delay between them and the master clock. If the delays in the two directions are the same (also called network symmetry), half of the total round-trip delay is the one-way link delay (meanPathDelay). If the network delay is asymmetric and the difference between the delays in the sending direction and the receiving direction is known by other means, you can configure asymmetric delay to correct the path delay, to achieve precise time synchronization.

After this procedure, the member clock obtains all the four timestamps and can make the following calculations: The Peer Delay mechanism measures the average path delay between two clock nodes. The two clock nodes (BC, TC, or OC) implementing this mechanism send Pdelay messages to each other, and calculate the one-way link delay between them independently. The message interaction process and delay calculation method are identical on the two nodes. TCs that exist between master and member clock nodes divide the synchronization path into multiple links and participate in delay calculation. The link delays and Sync message residence time on the TCs are carried to downstream nodes.

This mechanism can be implemented in one step or two-step mode: Figure 9 uses Clock node B as an example to describe the Peer Delay mechanism in two-step mode.

3.     Clock node A sends a Pdelay_Resp_Follow_Up message carrying t3 to Clock node B immediately after sending the Pdelay_Req message.

After this procedure, Clock node B obtains all the four timestamps and can make the following calculations: As shown in Figure 10, the base stations access the service provider's network through IP devices. For wireless clients to move smoothly between base stations, all neighboring base stations must be time synchronized with microsecond accuracy.

1.     To enhance availability and reduce cost, deploy two clock sources in redundancy at the core layer of the service provider's network.

As shown on the 5G access network in Figure 11, the base stations access the service provider's network through IP devices. For wireless clients to move smoothly between base stations, the neighboring base stations must be time synchronized with microsecond accuracy.