The fast expansion of data centers brings problems such as low utilization of hardware resources, and growth of power consumption and management costs. Server virtualization aims at solving these problems.

With server virtualization, servers might be relocated, which requires the support of a flexible Layer 2 network. In addition, the Layer 2 network must be highly scalable to provide enough bandwidth for the increasing number of servers.

The tradition Layer 2 network structure is designed to provide high availability for static applications. It cannot satisfy those needs brought by server virtualization.

Traditional Layer 2 networks use STP to eliminate loops. STP is not suitable for data center networks because of the following limitations:

Waste of bandwidth—Redundant links are blocked to avoid loops.

Restricted scope—The STP network is divided through Layer 3 networks to avoid broadcast storms, so the Layer 2 network size is restricted.

Excessive MAC learning—Switches on STP links must learn the MAC addresses of all terminals.

All these limitations restrict the size of STP networks.

Layer 2 switching has good flexibility but has above-mentioned limitations. Layer 3 routing has good stability, scalability, and performance but requires complicated configurations and lacks flexibility. New technologies such as virtualization cannot be easily deployed on traditional data center networks and most of their configurations are not replicable. All these things impact the development of data centers.

When servers are moved or changed, TRILL can dynamically adapt to the changes, while IP networks must be reconfigured.

TRILL can fully utilize links between RBs through ECMP.

TRILL forwards frames to their destinations through a shortest path tree to improve forwarding efficiency.

Distribution layer devices do not need to learn the MAC addresses of terminals.

System ID—Unique identifier of an RB in the TRILL network. The system ID is 6 bytes in length.

Nickname—Address of an RB in the TRILL network. The nickname is 2 bytes in length.

Designated Routing Bridge (DRB)—Similar to the designated IS (DIS) in IS-IS, a DRB exists in a broadcast network. It helps simplify network topology, and assigns AVFs and appointed ports for the VLANs on each RB in the broadcast network.

TRILL adds a TTL field into the TRILL header to mitigate loop issues. When the TTL expires, the frame is discarded.

TRILL uses extended IS-IS to advertise reachability information and uses SPF to compute routes based on the IS-IS LSDB.

TRILL uses a two-byte nickname to uniquely identify a RB. The nickname is a simplified IS-IS ID of the RB. A TRILL frame carries the nicknames of the ingress and egress RBs in the frame header.

On a broadcast network, TRILL elects a DRB to create pseudonodes and generate LSPs for them. To avoid loops, the DRB also appoints an AVF for each VLAN.

DRB election considers only priority and MAC without considering whether the link is bidirectional (a link is unidirectional if the neighbor list in a TRILL hello received does not contain the receiving RB). This mechanism ensures that only one DRB exists on a broadcast network to avoid loops. However, an LSP carries only neighbors that have bidirectional links to the advertising RB.

To avoid loops, a broadcast network only has one AVF to forward traffic for a VLAN. The AVF is appointed by the DRB. The DRB advertises AVF information in TRILL hellos. During network oscillation, a VLAN might have multiple AVFs. AVF suppression is used to avoid this problem.

If a DRB sends a hello that appoints an RB as the AVF of a VLAN and the appointed RB has multiple ports on the broadcast network, all those ports of the RB can receive the hello. In this case, the RB selects one of those ports as the AVF of that VLAN to avoid loops. The RB uses the pseudo ID in hello frames to determine whether they are from the same source, and considers the ports that receive the same hello as a port group.

Upon receiving a known unicast frame, a transit RB checks whether it is the egress RB in the frame. If yes, it de-encapsulates the frame. If not, it uses the egress RB to look up the TRILL unicast route table and the next hop table, updates the outer Ethernet header (changes the destination MAC address to the MAC address of the next hop and changes the source MAC address to its own MAC address), and sends the frame through the specified port. During forwarding, the TRILL header only has the Hop Count field changed. Figure 4 shows how a frame is forwarded through a TRILL network. 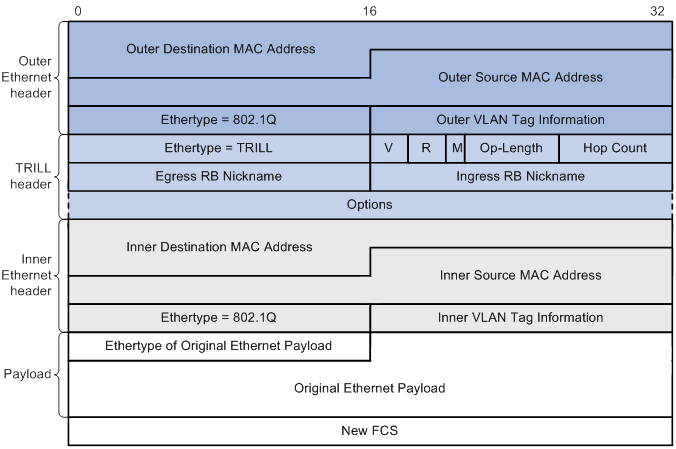 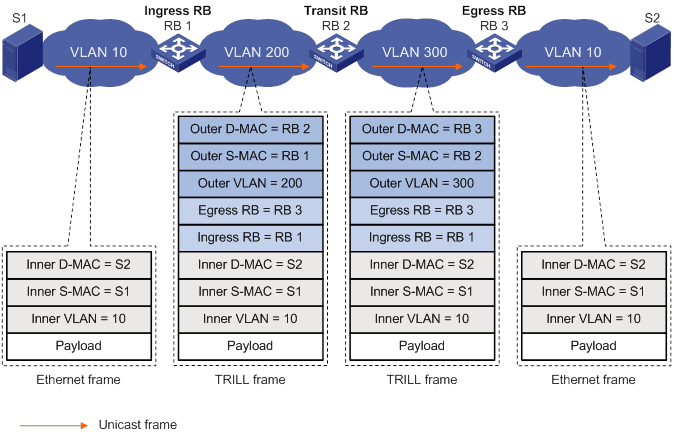 Upon receiving a multicast frame (an unknown unicast, a broadcast, or a multicast frame), the ingress RB selects a multicast tree root according to the configured rules such as VLAN-based load sharing. Then the ingress RB adds the nickname of the root to the Egress RB field of the TRILL header, adds its own nickname to the Ingress RB field, and sets the M bit to 1. In the outer Ethernet header, the destination MAC address is fixed to the All-RBridges address 01-80-C2-00-00-40, and the source MAC address is changed on each transit RB.

Figure 5 Forwarding of a multicast frame

Different from IP routing that needs complicated configurations, TRILL automatically assigns addresses (nicknames) to RBs and uses the nicknames to generate a routing table that directs the forwarding of unicast and multicast packets. TRILL integrates the advantages of routing into Layer 2 networks. A TRILL network has both the simplicity and flexibility of Layer 2 networks and the stability and scalability of Layer 3 networks.

H3C TRILL-capable switches are the basis of new-generation data centers featuring good scalability, high performance, and good manageability. Together with H3C proprietary IRF technology, TRILL can simplify and expand the infrastructures of data centers. TRILL supports ECMP routes and provides optimal bandwidth between any two RBs. The size of a TRILL network is not restricted. Theoretically, a TRILL network can be infinitely expanded.

Generally, a large data center is divided into multiple subnets because of the limitations of STP. As shown in Figure 6, Data Center A has two subnets that communicate with the core devices through Layer 3 routing. To add uplink bandwidth for the subnets, you can create virtual switches by using H3C IRF technology. IRF can avoid loops without needing STP and implement load sharing, but IRF is not suitable when many switches needed to be virtualized. Therefore, the uplink bandwidth becomes the bottleneck. In addition, the subnets are restricted in size because of STP, and servers cannot be easily moved because of complex configurations. 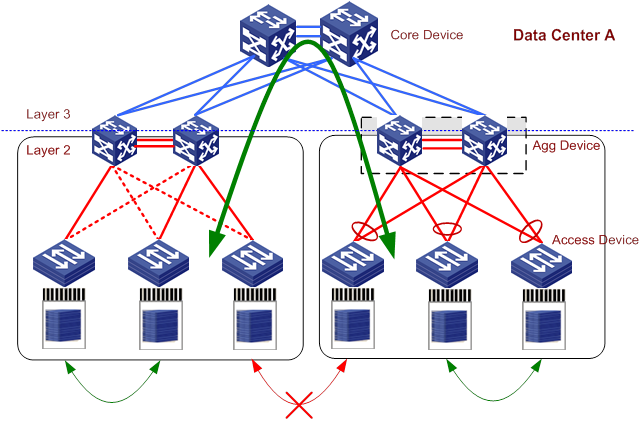 Figure 7 shows a TRILL-based data center network. Although Data Center B has different cabling from Data Center A, they have the same numbers of links and switches. In Data Center B, each access switch connects to multiple distribution switches. TRILL runs between access switches and distribution switches. TRILL removes routing loops, supports ECMP, and has better bandwidth expansion capability. With TRILL, servers can be easily moved. TRILL implements a large Layer 2 network without subnetting. 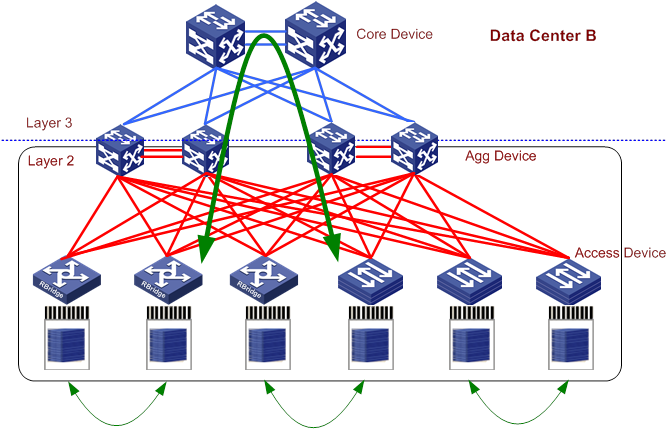 In Data Center B, TRILL removes the need of complex configurations on switches.

In Data Center A, access switches in different areas communicate with each other through Layer 3 routing. Therefore, it is difficult to move servers between areas because of complex configurations.

In Data Center B, all access switches are reachable to each other at Layer 2. Therefore, servers can be easily moved.

In Data Center B, each access switch can fully utilize its own 40 G link without uplink bandwidth limitation and implement shortest paths and ECMP.

In Data Center A, the failure of a distribution switch reduces 50% bandwidth of access switches.

In Data Center B, the failure of a distribution switch reduces 25% bandwidth of access switches.

Data center networks are designed to minimize communication overhead for servers. In conventional data centers, Layer 3 boundaries are often deployed close to the STP root bridge to process south-north traffic. To remove loops, any two switches can use only one link to send traffic even if there are multiple links between them. Because east-west traffic is often excessive, the bandwidth restriction seriously affects bidirectional traffic forwarding.

TRILL introduces ECMP of Layer 3 routing to remove the restriction of STP.

TRILL combines the advantages of Layer 2 switching and Layer 3 routing to provide a simply, scalable, and high-performance data center solution. It removes the limitations of conventional STP-based Layer 2 networks.

RFC 6326, Transparent Interconnection of Lots of Links (TRILL) Use of IS-IS

RFC 1195, Use of OSI IS-IS for Routing in TCP/IP and Dual Environments