To implement high reliability and redundancy deployment, most enterprise networks and data centers span multiple physical sites in different physical locations. For dynamic resource allocation and management among these sites, virtual machines (VMs) must be freely migrated between data centers. Because the VM migration process is transparent for users and the VM IP addresses cannot be changed during the migration, Layer 2 interconnect must be implemented between sites located in different places.

Layer 2 interconnect among sites must satisfy the following requirements:

Site independence—Problems (for example, broadcast storms) in a site are not spread to other sites, and the topology of each site does not affect or depend on each other.

Transport independence—No special requirements are posed on the inter-site data transmission techniques, site locations, and service provider networks. The most common technologies, for example, IP, are used in the core network.

High availability—Multi-homing is used to provide redundant access and the loop avoidance mechanism.

Link efficiency—The inter-site traffic, including multicast traffic and broadcast traffic, must be fully optimized to save the bandwidth, and be load-balanced when redundant links exist.

Site transparency—The data center interconnect does not depend on the topology of a site or pose special requirements on the site topology.

Fast service deployment and easy network maintenance—The services are separate from the core network and deployed only on the BEBs. The newly added links and devices in the core network do not need to be aware of services.

Backbone link/access link—A link that connects a backbone core bridge (BCB) to a backbone edge bridge (BEB) is a backbone link. A link that connects a BEB to a customer network is called an access link. After the frames from the customer network are encapsulated in MAC-in-MAC frames, they are forwarded along the corresponding backbone link of the BEB. After the MAC-in-MAC frames from the SPBM network are decapsulated, they are forwarded out along the corresponding access link of the BEB according to the customer MAC address.

BCB—BCBs are core nodes of an SPBM network. BCBs forward MAC-in-MAC frames based on the B-MAC and B-VLAN. They do not learn customer MAC (C-MAC) addresses. This makes the SPBM network more expandable.

For customer frames to be transmitted across an SPBM network, the ingress BEB encapsulates them in MAC-in-MAC format. In the outer frame header, the source MAC address is a B-MAC of the ingress BEB, and the destination MAC is a B-MAC of the egress BEB. All devices in the SPBM network forward the MAC-in-MAC frames based on the destination B-MAC and B-VLAN.

LSDB—A link state database (LSDB) contains the states of all links in an SPBM network.

PW—Pseudo wires (PWs) are MAC-in-MAC tunnels established over the SPBM network for transmitting customer traffic. PWs are established between BEBs. BCBs do not set up PWs. 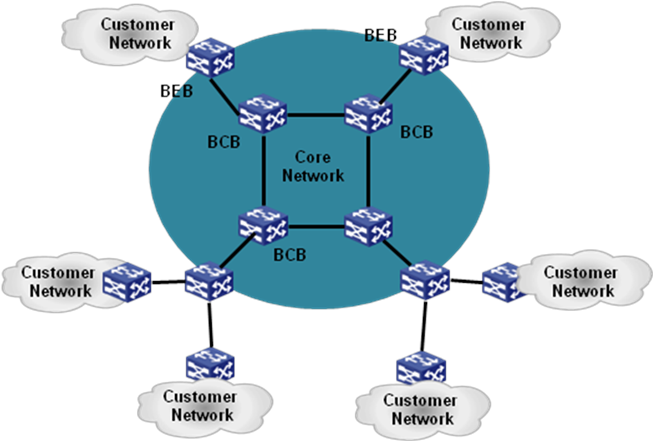 After the BCBs are deployed, you do not need to change them. If you want to add new SPB VSIs, you only need to deploy the SPB VSIs on the BEBs.

A customer network can access the SPBM network through VLANs or VPNs. 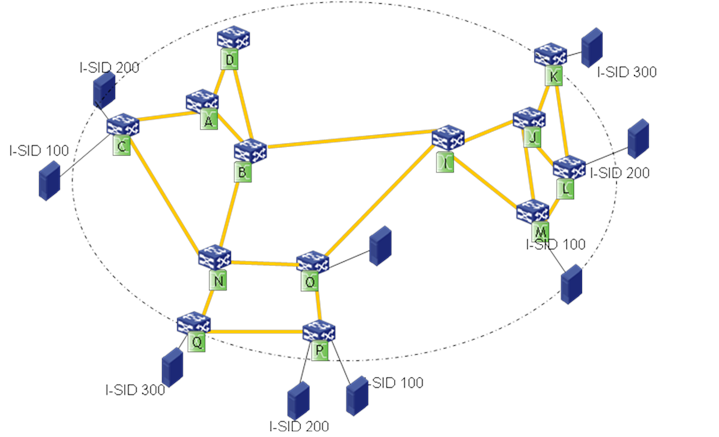 In the VLAN access mode, the whole network organizes users by VLAN. The SPB VSIs are used as management zones carrying different VLANs. You can deploy SPB VSIs and VLANs on the network access points rather than on backbone nodes. This configuration procedure is simple.

In the VPN access mode, BEBs are the edge devices of the VPN, and the SPB VSIs identify network users. Different users access the core network through different physical ports. Deploy the SPB VSIs and access virtual ports on the network access points, and you do not need to deploy them on the backbone nodes. This mode supports VLAN mapping and multi-user access, and the configuration is complicated.

The SPBM control plane provides a very simple operation and maintenance mode that runs only the ISIS-SPB protocol. This reduces the deployment cost. 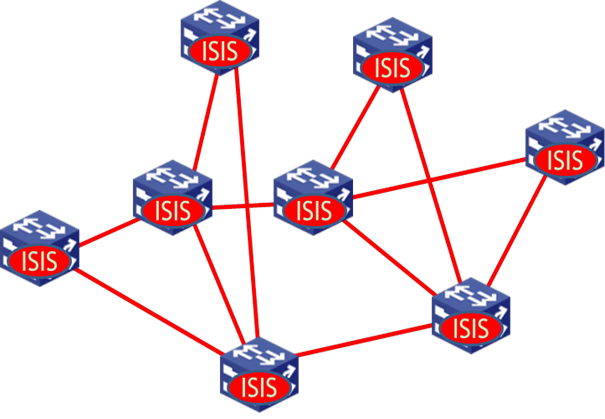 Before the shortest path tree calculation, the network topology must be discovered first. ISIS-SPB runs on all devices of the SPBM network. These devices establish point-to-point protocol adjacencies between each other and exchange topology information. Each device has a node ID for topology advertisement. Additionally, each device has at least one B-MAC, which is used as the destination MAC address of frames that the other devices send to the local device through the SPBM network.

SPBM traffic is carried on B-VLANs. A B-VLAN can carry one or multiple SPB VSIs. Each B-VLAN has a unique equal-cost tree (ECT), which implements load balancing among different B-VLANs. The ISIS-SPB protocol exchanges B-VLAN to ECT algorithm mappings between neighbors through IIH packets, and synchronizes the B-VLAN to ECT algorithm mappings throughout the network through LSPs.

After the ISIS-SPB protocol establishes adjacencies, each node advertises its B-MAC through LSPs. Eventually, the LSDBs of all nodes are synchronized. Each node runs SPF to calculate the shortest path from itself to each of the other nodes. Then each BEB can advertise its local C-MAC address entries to other BEBs.

If a node is removed from the network, the adjacent devices of the removed node will trigger the ISIS-SPB protocol on the control plane to update MAC addresses for the other devices to delete the removed MAC address.

If you deploy a new SPB VSI, each member BEB uses ISIS-SPB to advertise the B-MAC and I-SID information and declares itself as the member of the I-SID. In this example, B-VLAN 10 is assigned to I-SID 200, and three nodes are in I-SID 200. 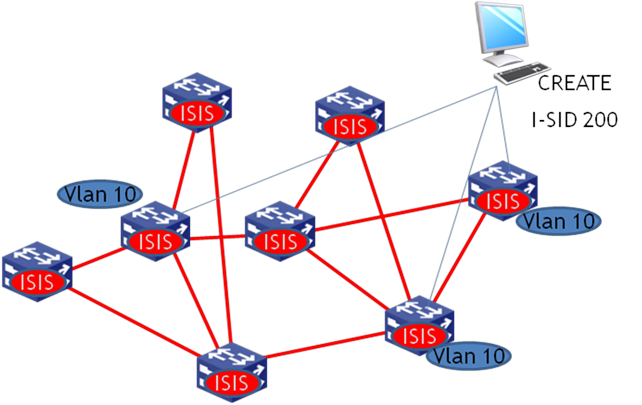 The I-SID and B-MAC advertisement process is shown Figure 5. 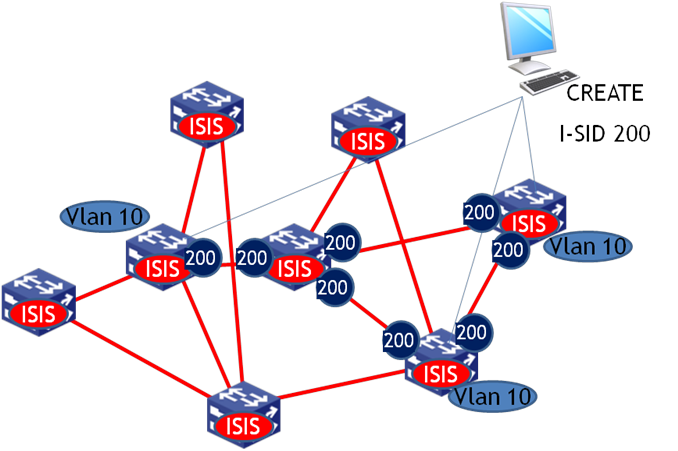 After the B-MAC/I-SID information is flooded through LSPs, each node in B-VLAN 10 calculates the FDB according to the ISIS-SPB shortest path tree. Traditional MAC flooding and learning mechanisms are not used in B-VLANs, and the FDB is completely obtained through the ISIS-SPB protocol. 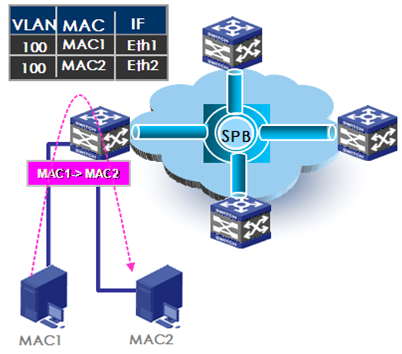 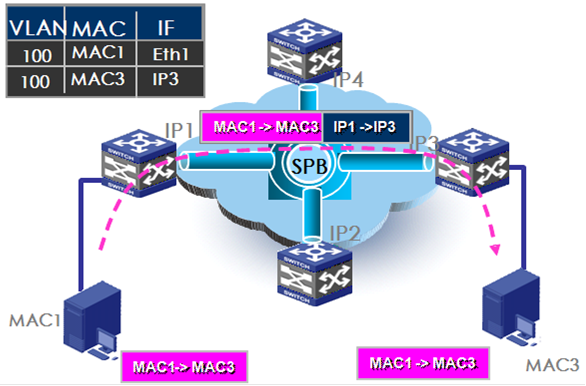 The traffic forwarding flow is as follows:

1.        When an ingress BEB receives an Ethernet frame, it performs the following tasks:

a.    Assigns the frame to the correct SPB VSI based on the outer VLAN.

b.    Learns the source MAC address.

2.        If the outgoing interface is a transport network port, the ingress BEB encapsulates the original Ethernet frame in MAC-in-MAC format. The source MAC in the outer Ethernet header is the ingress BEB's MAC address, the destination MAC address is the MAC address of the egress BEB, and the B-tag contains the B-VLAN of the SPB VSI.

3.        The ingress BEB sends the MAC-in-MAC frame to the core network through the provider network port.

4.        The egress BEB decapsulates the packet and removes the outer Ethernet header.

Head-end replication—Replicates frames at the ingress BEB for frames to enter the SPBM network. This method is suitable for SPB VSIs that have sparse multicast traffic. It does not require BCBs to maintain multicast FDB entries.

Tandem replication—Replicates frames only at the node where the shortest path tree forks. This method is suitable for SPB VSIs that have dense multicast traffic. It requires BCBs to maintain multicast FDB entries. 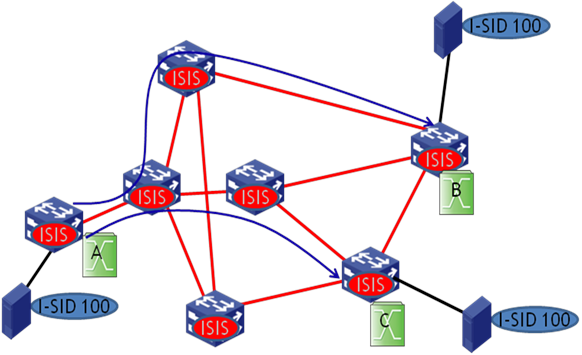 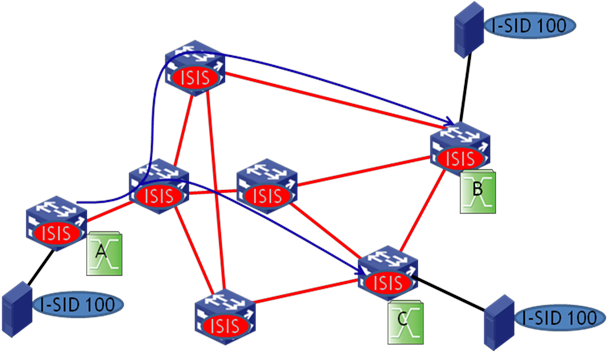 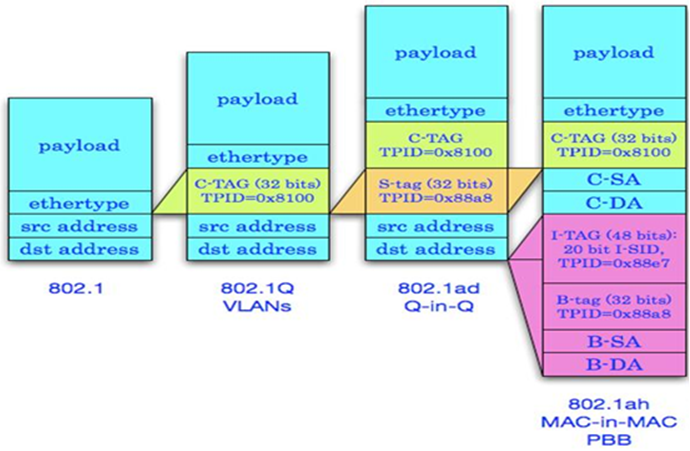 To implement high reliability and avoid single-point failures for network devices, you can use two BEBs to connect a customer site to the core network. Loops might exist in the dual-homing site, as shown in Figure 11. 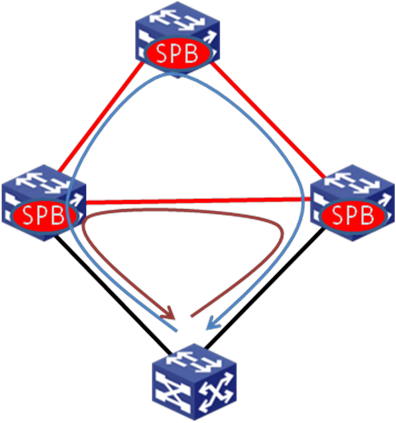 The IRF technology virtualizes multiple physical devices into a single logical device. You can use IRF and multichassis link aggregation to eliminate loops, as shown in Figure 12.

The sites of a data center might have different VLAN deployment plans. The same service might be deployed to different VLANs at two sites. For communication between these VLANs without changing the original networks of the sites, you must configure VLAN mapping on the BEBs.

SPBM binds C-VLANs to I-SIDs on the BEB, so that C-VLANs can be distributed in different sites. A network administrator only needs to deploy VLAN mappings on the BEB. Then, the SPBM network can automatically establish VLAN-based connections for users. In Figure 13, VLAN 10 is mapped to I-SID 100, and VLAN 20 is mapped to I-SID 200.

The SPBM specifications defined in the current software version are as follows:

The number of neighbors for a single device: 255.

Most data centers use the layered hierarchical design method. In this method, node redundancy is deployed at each layer. At the distribution layer, service processing devices or modules, such as SLBs, firewalls, IPSs, are deployed also with redundancy. The distribution devices form the boundaries between Layer 2 broadcast domain and Layer 3 routed network.

Enterprises typically apply the same network design to their geographically dispersed data centers and deploy the same applications in the data centers for high availability and ease of dynamic resources management. A practice that has been widely used is to deploy modular data centers, such as HP PODs. Each modular data center (or POD) includes a set of servers, racks, access switches, and distribution switches. Data center expansion is to add PODs as needed. The PODs are connected through core layer devices. 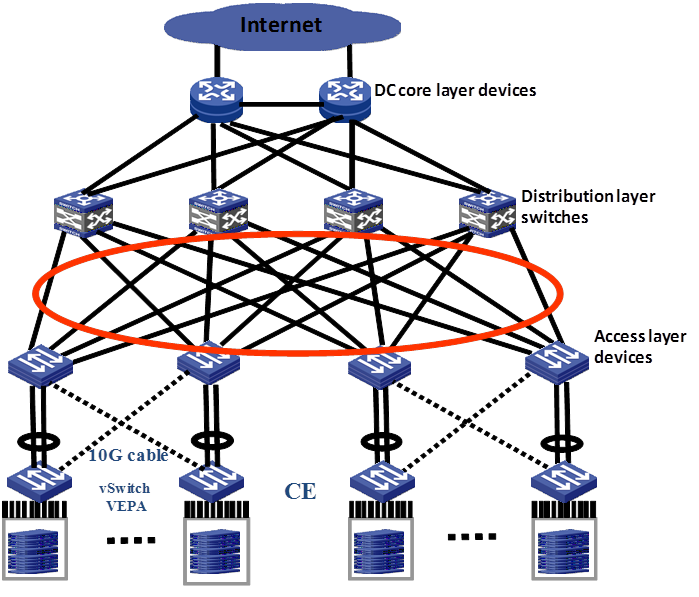 vSwitches access the network through 10-GE links at Layer 2. SPBM switches are deployed on the access layer and distribution layer. Up to 16 equal-cost paths are supported. 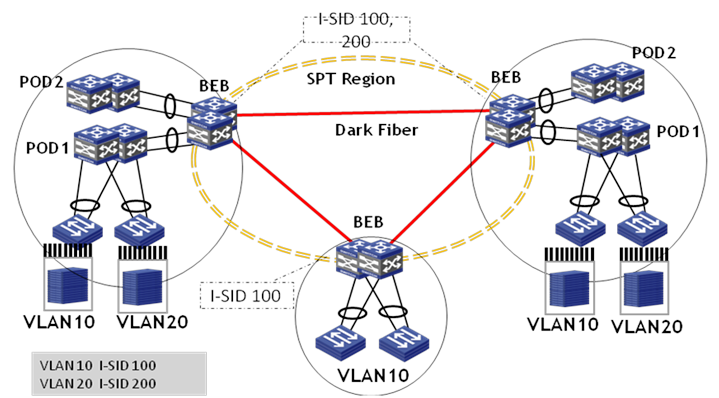 In the SPBM DCI model, the distribution layer and the edge layer of data centers are independent. The DCI edge devices are BEBs. BEBs connect multiple distribution areas in the site and assign different SPB VSIs to them, thus establishing multiple logical, small-scaled Layer 2 networks.

As shown in Figure 16, the SPBM network can provide access services for multiple tenants, for example, education organizations, government agencies, and fire fighting departments. These tenants are distributed in different locations of a city, and are in the same network for servicing. The core network runs two data centers which are transparently interconnected by the SPBM network to implement server virtualization.

All departments share the same core network. However, each department performs operations in only their own security zone. Departments cannot communicate with each other without penetrating the firewall in the data center. 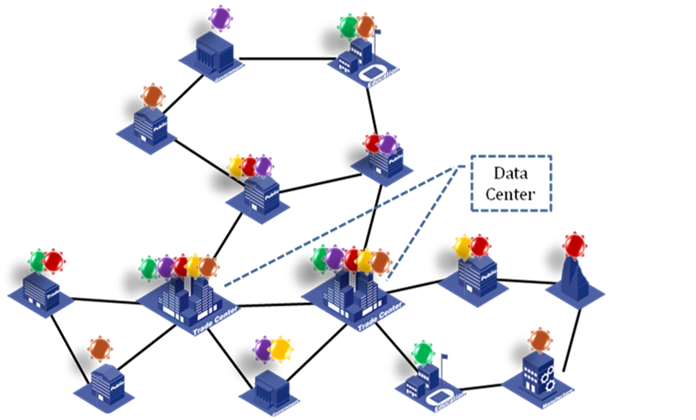 Figure 16 shows a typical network for public departments of a city. These departments are located in different areas of the city, and all data is saved in the two data centers. These departments are interconnected through the SPBM network. The SPBM links form the core network of the campus. Each node has one or two devices accessing the core network. The interconnecting links are bare fibers, E-line services, CWDM, DWDM, or other links that support transmitting Ethernet frames. The two data centers deploy virtualized servers and storage devices, and assign different SPB VSIs to different departments, so that the users of the same department can communicate with each other at Layer 2 and users of different departments are isolated. For example, I-SID 20 is allocated to the education department. You only need to deploy the I-SID on the related access devices rather than other nodes. Then, the education department uses the logical Layer 2 network identified by I-SID 20, and the traffic will not be flooded to unrelated devices. 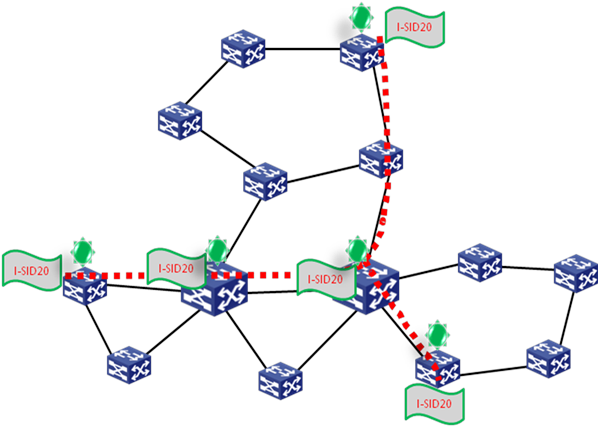