Deploying QoS in a network· 3

QoS processing flow in a device· 3

Configuring a port to trust packet priority for priority mapping· 12

Changing the port priority of an interface· 12

In data communications, Quality of Service (QoS) provides differentiated service guarantees for diversified traffic in terms of bandwidth, delay, jitter, and drop rate, all of which can affect QoS.

The best-effort service model is the default model for the Internet and applies to most network applications. It uses the First In First Out (FIFO) queuing mechanism.

The integrated service (IntServ) model is a multiple-service model that can accommodate diverse QoS requirements. This service model provides the most granularly differentiated QoS by identifying and guaranteeing definite QoS for each data flow.

In the IntServ model, an application must request service from the network before it sends data. IntServ signals the service request with the RSVP. All nodes receiving the request reserve resources as requested and maintain state information for the application flow.

The IntServ model demands high storage and processing capabilities because it requires all nodes along the transmission path to maintain resource state information for each flow. This model is suitable for small-sized or edge networks. However, it is not suitable for large-sized networks, for example, the core layer of the Internet, where billions of flows are present.

The differentiated service (DiffServ) model is a multiple-service model that can meet diverse QoS requirements. It is easy to implement and extend. DiffServ does not signal the network to reserve resources before sending data, as IntServ does.

The QoS techniques include the following features:

All QoS techniques in this document are based on the DiffServ model.

Deploying QoS in a network

Figure 1 Position of the QoS techniques in a network 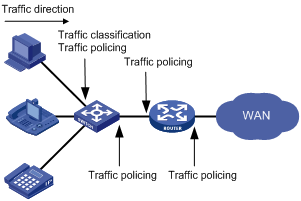 ·     Traffic classification—Uses match criteria to assign packets with the same characteristics to a traffic class. Based on traffic classes, you can provide differentiated services.

·     Traffic policing—Polices flows and imposes penalties to prevent aggressive use of network resources. You can apply traffic policing to both incoming and outgoing traffic of a port.

QoS processing flow in a device

2.     The QoS module takes various QoS actions on classified traffic as configured, depending on the traffic processing phase and network status. For example, you can configure the QoS module to perform traffic policing for incoming traffic. 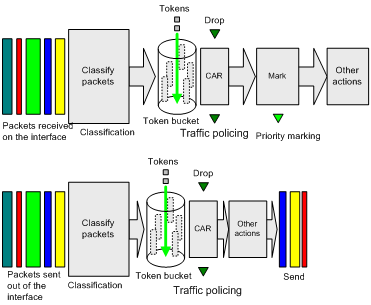 You can configure QoS by using the MQC approach or non-MQC approach. Some features support both approaches, but some support only one.

In the non-MQC approach, you configure QoS service parameters without using a QoS policy.

In the modular QoS configuration (MQC) approach, you configure QoS service parameters by using QoS policies. A QoS policy defines the policing or other QoS actions to take on different classes of traffic. It is a set of class-behavior associations.

A traffic class is a set of match criteria for identifying traffic, and it uses the AND or OR operator.

·     If the operator is AND, a packet must match all the criteria to match the traffic class.

A traffic behavior defines a set of QoS actions to take on packets, such as priority marking. A traffic behavior is a set of QoS actions (such as traffic policing and priority marking) to take on a traffic class.

To define a traffic behavior:

To perform actions defined in a behavior for a class of packets, associate the behavior with the class in a QoS policy.

To associate a traffic class with a traffic behavior in a QoS policy:

You can apply a QoS policy to the following destinations:

·     Interface—The QoS policy takes effect on the traffic sent or received on the interface.

·     User profile—The QoS policy takes effect on the traffic sent or received by the online users of the user profile.

You can modify traffic classes, traffic behaviors, and class-behavior associations in a QoS policy even after it is applied. If a traffic class uses an ACL for traffic classification, you can delete or modify the ACL.

The QoS policy applied to the outgoing traffic on an interface does not regulate local packets. Local packets refer to critical protocol packets sent by the local system for operation maintenance. The most common local packets include link maintenance, RIP, and SSH packets.

The following matrix shows the feature and hardware compatibility:

To apply a QoS policy to a user profile:

When a packet arrives, a device assigns a set of QoS priority parameters to the packet based on either of the following:

·     A priority field carried in the packet.

·     The port priority of the incoming port.

Priority mapping is implemented with priority maps and involves the following priorities:

Priorities include the following types: priorities carried in packets, and priorities locally assigned for scheduling only.

Packet-carried priorities include 802.1p priority, DSCP precedence, and IP precedence. These priorities have global significance and affect the forwarding priority of packets across the network. For more information about these priorities, see "Appendixes."

The device provides various types of priority maps. By looking through a priority map, the device decides which priority value to assign to a packet for subsequent packet processing.

You can configure priority mapping by using any of the following methods:

The device provides the following types of priority map:

To configure a priority map

Configuring a port to trust packet priority for priority mapping

You can configure the device to trust a particular priority field carried in packets for priority mapping on ports or globally.

When you configure the trusted packet priority type on an interface, use the following available keywords:

·     dscp—Uses the DSCP precedence of received IP packets for mapping.

To configure the trusted packet priority type on an interface:

Changing the port priority of an interface

If an interface does not trust any packet priority, the device uses its port priority to look for priority parameters for the incoming packets. By changing port priority, you can prioritize traffic received on different interfaces.

To change the port priority of an interface:

As shown in Figure 4:

Configure the AC to preferentially process packets from Device A to the server when GigabitEthernet 1/0/3 of the AC is congested. 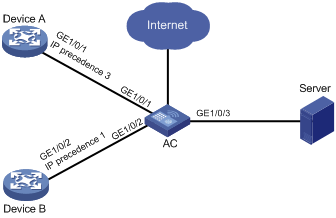 Traffic policing helps assign network resources (including bandwidth) and increase network performance. For example, you can configure a flow to use only the resources committed to it in a certain time range. This avoids network congestion caused by burst traffic.

·     The packet conforms to the specification (called conforming traffic) and is colored green.

·     The corresponding tokens are taken away from the bucket.

Otherwise, the packet does not conform to the specification (called excess traffic) and is colored red.

·     Committed information rate (CIR)—Mean rate at which tokens are put into bucket C. It sets the average packet transmission or forwarding rate allowed by bucket C.

·     Committed burst size (CBS)—Size of bucket C, which specifies the transient burst of traffic that bucket C can forward in each burst. The CBS must be greater than the maximum packet size.

A typical application of traffic policing is to supervise the specification of traffic entering a network and limit it within a reasonable range. Another application is to "discipline" the extra traffic to prevent aggressive use of network resources by an application. For example, you can limit bandwidth for HTTP packets to less than 50% of the total. If the traffic of a session exceeds the limit, traffic policing can drop the packets or reset the IP precedence of the packets. Figure 5 shows an example of policing outbound traffic on an interface. Traffic policing is widely used in policing traffic entering the ISP networks. It can classify the policed traffic and take predefined policing actions on each packet depending on the evaluation result:

·     Forwarding the packet if the evaluation result is "conforming."

·     Dropping the packet if the evaluation result is "excess."

The following matrix shows the feature and hardware compatibility:

To configure traffic policing for a user profile:

You can filter in or filter out traffic of a class by associating the class with a traffic filtering action. For example, you can filter packets sourced from an IP address according to network status.

As shown in Figure 6, configure traffic filtering on GigabitEthernet 1/0/1 to deny the incoming packets with a source port number other than 21.

# Create advanced ACL 3000, and configure a rule to match packets whose source port number is not 21.

To configure priority marking to set the priority fields or flag bits for a class of packets, perform the following tasks:

1.     Configure a traffic behavior with a priority marking action.

As shown in Figure 7, configure priority marking on the AC to meet the following requirements:

# Create a traffic class named classifier_dbserver, and use ACL 3000 as the match criterion in the traffic class.

# Create a traffic class named classifier_mserver, and use ACL 3001 as the match criterion in the traffic class.

# Create a traffic class named classifier_fserver, and use ACL 3002 as the match criterion in the traffic class.

# Create a traffic behavior named behavior_dbserver, and configure the action of setting the local precedence value to 4.

# Create a traffic behavior named behavior_mserver, and configure the action of setting the local precedence value to 3.

# Create a traffic behavior named behavior_fserver, and configure the action of setting the local precedence value to 2.

# Apply the QoS policy named policy_server to the incoming traffic of GigabitEthernet 1/0/1.

802.1p priority lies in the Layer 2 header. It applies to occasions where Layer 3 header analysis is not needed and QoS must be assured at Layer 2.

Figure 9 An Ethernet frame with an 802.1Q tag header