Assigning a trunk port to a VLAN·· 6

Assigning a hybrid port to a VLAN·· 7

VLANs enable a Layer 2 switch to break a LAN down into smaller broadcast domains, as shown in Figure 1. 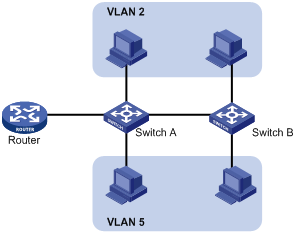 A VLAN is logically divided on an organizational basis rather than on a physical basis. For example, you can assign all workstations and servers used by a particular workgroup to the same VLAN, regardless of their physical locations. Hosts in the same VLAN can directly communicate with one another. You need a router or a Layer 3 switch for hosts in different VLANs to communicate with one another.

·     CFI—1-bit long canonical format indicator that indicates whether the MAC addresses are encapsulated in the standard format when packets are transmitted across different media. Available values include:

¡     0 (default)—The MAC addresses are encapsulated in the standard format.

¡     1—The MAC addresses are encapsulated in a non-standard format.

This field is always set to 0 for Ethernet.

The way a network device handles an incoming frame depends on whether the frame has a VLAN tag and the value of the VLAN tag (if any). For more information, see "Introduction."

For a frame that has multiple VLAN tags, the device handles it according to its outermost VLAN tag and transmits its inner VLAN tags as the payload.

Before you create a VLAN interface for a VLAN, create the VLAN first.

To configure basic settings of a VLAN interface:

Port-based VLANs group VLAN members by port. A port forwards packets from a VLAN only after it is assigned to the VLAN.

You can set the link type of a port to access, trunk, or hybrid. The port link type determines whether the port can be assigned to multiple VLANs. The link types use the following VLAN tag handling methods:

·     Access—An access port can forward packets only from one VLAN and send these packets untagged. An access port is typically used in the following conditions:

¡     Connecting to a terminal device that does not support VLAN packets.

¡     In scenarios that do not distinguish VLANs.

·     Trunk—A trunk port can forward packets from multiple VLANs. Except packets from the port VLAN ID (PVID), packets sent out of a trunk port are VLAN-tagged. Ports connecting network devices are typically configured as trunk ports.

·     Hybrid—A hybrid port can forward packets from multiple VLANs. The tagging status of the packets forwarded by a hybrid port depends on the port configuration.

The PVID identifies the default VLAN of a port. Untagged packets received on a port are considered as the packets from the port PVID.

When you set the PVID for a port, follow these restrictions and guidelines:

·     An access port can join only one VLAN. The VLAN to which the access port belongs is the PVID of the port.

·     A trunk or hybrid port supports multiple VLANs and the PVID configuration.

·     When you use the undo vlan command to delete the PVID of a port, either of the following events occurs depending on the port link type:

¡     For a hybrid or trunk port, the PVID setting of the port does not change.

You can use a nonexistent VLAN as the PVID for a hybrid or trunk port, but not for an access port.

·     H3C recommends that you set the same PVID for a local port and its peer.

You can assign an access port to a VLAN in VLAN view or interface view.

Make sure the VLAN has been created.

Assign an access port to a VLAN in interface view

Assigning a trunk port to a VLAN

A trunk port supports multiple VLANs. You can assign it to a VLAN in interface view.

When you assign a trunk port to a VLAN, follow these restrictions and guidelines:

·     To enable a trunk port to transmit packets from its PVID, you must assign the trunk port to the PVID by using the port trunk permit vlan command.

To assign a trunk port to one or multiple VLANs:

Assigning a hybrid port to a VLAN

A hybrid port supports multiple VLANs. You can assign it to the specified VLANs in interface view. Make sure the VLANs have been created.

When you assign a hybrid port to a VLAN, follow these restrictions and guidelines:

To assign a hybrid port to one or multiple VLANs:

A VLAN group includes a set of VLANs.

To configure a VLAN group: