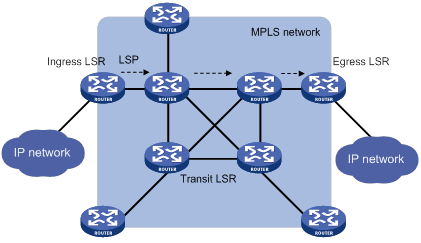 c.     Forwards the labeled packet out of the interface VLAN-interface 2 to the next hop LSR Device C.

c.     Forwards the labeled packet out of the outgoing interface VLAN-interface 3 to the next hop LSR Device D.

c.     Forwards the packet out of the outgoing interface VLAN-interface 4 to the next hop LSR Device E. 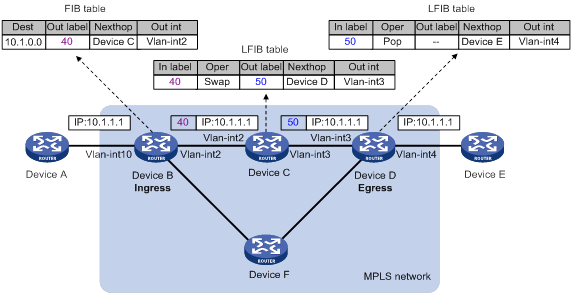 Before you enable MPLS, perform the following tasks:

·     Configure static routes or an IGP protocol to ensure IP connectivity among LSRs.

·     If fragmentation is not allowed, the LSR drops the packet.

To set an MPLS MTU for an interface:

The following applies when an interface handles MPLS packets:

·     If you do not configure the MPLS MTU of an interface, fragmentation of MPLS packets is based on the MTU of the interface without considering MPLS labels. An MPLS fragment might be larger than the interface MTU and be dropped.

In an MPLS network, an egress node can advertise the following types of labels:

For LSPs established by a label distribution protocol, the label advertised by the egress node determines how the penultimate hop processes a labeled packet.

·     If the egress node advertises an implicit null label, the penultimate hop directly pops the top label of a matching packet.

·     If the egress node advertises a non-null label, the penultimate hop swaps the top label of a matching packet with the label assigned by the egress node.

For LDP LSPs, the mpls label advertise command triggers LDP to delete the LSPs established before the command is executed and re-establishes new LSPs.

To specify the type of label that the egress node will advertise to the penultimate hop:

·     To enable TTL propagation for a VPN, you must enable it on all PE devices in the VPN. Then, you can get the same traceroute result (hop count) from those PEs.

·     The enabling or disabling configuration of this feature takes effect only on LSPs established after the configuration.

To enable SNMP notifications for MPLS: