Front Panel of the power module· 7

Installing and removing the power module· 19

Handle of the power module· 19

·     A redundant power supply for PDs

Serving as a redundant power supply, the RPS1600-A offers the following functions:

·     If using the same AC power source with a PD, when the internal power supply system of the PD fails, the RPS1600-A can provide DC power supply to the PD, ensuring uninterrupted operation of the PD.

·     If using a different AC power source from the PD, when the AC power source to the PD fails, the RPS1600-A can provide DC power supply to the PD, ensuring uninterrupted operation of the PD.

Table 1 Technical specifications of the RPS1600-A

The RPS1600-A supports a variety of protection features, as shown in Table 2.

Table 2 Protection features of the RPS1600-A

Front Panel of the power module

To avoid any device impairment and bodily injury caused by improper use, observe these rules:

·     Do not place the RPS1600-A on an unstable case or table, and ensure that the cabinet and the workbench are firm enough to support the RPS1600-A and its accessories.

·     Keep the RPS1600-A away from high-power radio transmitters, radars, and high-frequency devices working in high current. Use electromagnetic shielding when necessary.

·     Make sure that the operating voltage of the power source matches the voltage required by the RPS1600-A.

·     Interface cables must be routed indoors. Otherwise, over-voltage and over-current may damage the device. As for power cables from the outside of the building, you can add a dedicated lightning arrester at the input end of the cables.

·     To enhance lightning protection, add a power lightning arrester at the input end.

·     Wear an ESD-preventive wrist strap when installing the RPS1600-A, and make sure that the wrist strap has good skin contact.

·     To avoid electric shock, never open the chassis of the RPS1600-A while it is in operation; try not to open the RPS1600-A even if it is not electrified.

The RPS1600-A can be installed either in a 19-inch standard rack or on a workbench.

Install the RPS1600-A by using front and rear mounting brackets

Follow these steps to install the RPS1600-A by using front and rear mounting brackets:

1.     Wear an ESD-preventive wrist strap (make sure it makes good skin contact and is well grounded), and check the grounding and stableness of the rack.

Figure 5 Install a front mounting bracket to the RPS1600-A

3.     Unpack the supplied weight-bearing screws and install them into the appropriate screw holes at both side of the RPS1600-A. 4.     In accordance with the RPS unit installation position in the rack, fix the rear mounting brackets to the rear square-holed posts by using M6 screws and cage nuts (user supplied), as shown in Figure 7.

Figure 7 Install the rear mounting brackets to the rack 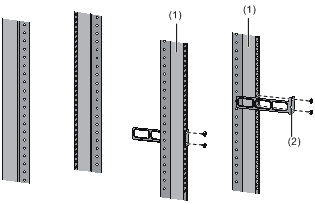 1.     Wear an ESD-preventive wrist strap and check the grounding and stableness of the rack.

2.     Fix the rack shelf supplied with the rack horizontally at the appropriate position of the rack.

4.     Place the RPS1600-A horizontally on the rack shelf, gently push the unit into the rack along the rack shelf, and fix the mounting brackets to the front square-holed posts of the rack with M6 screws and cage nuts (user supplied).

Installing the RPS1600-A on a workbench

1.     Cautiously turn the RPS1600-A upside down. Then, use a piece of dry, soft cloth to remove any oil stain or dust from the dents on the bottom of the chassis.

2.     Peel off the stickers on the supplied foot pads and paste the foot pads into the dents on the chassis bottom.

3.     Turn over the RPS1600-A and place it on the workbench. Make sure that the workbench is sturdy and well grounded.

1.     Remove the grounding screw from the rear panel of the RPS unit. 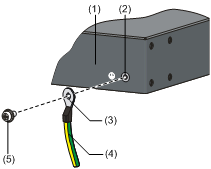 Installing and removing the power module

Handle of the power module

Follow these steps to connect the RPS1600-A to a PD:

1.     Check that the power source to the RPS1600-A is disconnected and the PD is powered off.

·     Before powering on the RPS1600-A, check the AC input with a multimeter set to Ohms to eliminate any short circuit.

For more information about the LED description, see “LEDs description.”