802.11ac and earlier WLAN protocols are targeted at improving the transmission rate instead of the network capacity. The popularization of wireless clients and applications has brought higher requirements on network capacity, especially in dense environments.

802.11ax is developed to resolve the issue by adopting series of new technologies and optimization methods to increase the access rate, high-density performance, and wireless coverage. It can meet the requirements of latency-sensitive applications such as instant messaging, AR/VR, and high-definition media services. 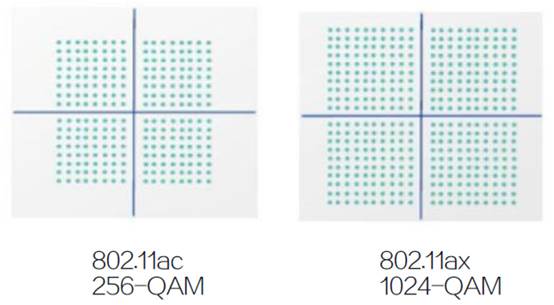 Orthogonal frequency-division multiplexing (OFDM) enables a single user to transmit data on all subcarriers at a given period of time. Based on OFDM, orthogonal frequency division multiple access (OFDMA) splits a channel into sub-channels, known as resource units (RUs), with specific subcarriers (tones), and assigns different RUs to different users for simultaneous transmission. This increases the data rate and reduces transmission latency. The technology is particularly applicable to devices transmitting a large number of short frames or devices with low data rate requirements, such as IoT devices. 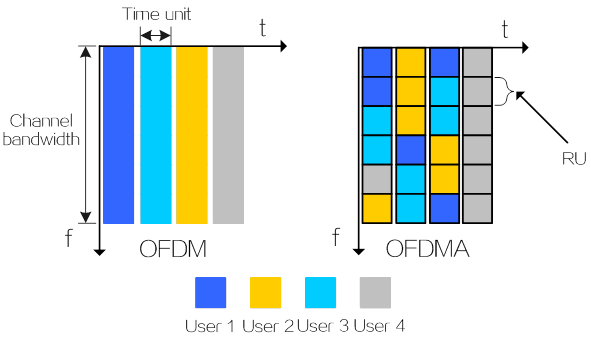 In OFDMA, a signal is transmitted over several subcarriers, which determine the bandwidth that can be used by a user.

Subcarriers include the following types:

·          Unused subcarrier—Carries nothing to act as guard bands and isolate groups of subcarriers.

As shown in Figure 3, a 20 MHz bandwidth is formed by nine 26-tone RUs, among which –69, –3 to +3, and +69 subcarriers are null subcarriers. The first six and the last five subcarriers (a total of 11 subcarriers) act as the guide bands.

Figure 3 RU locations in a 20 MHz HE PPDU 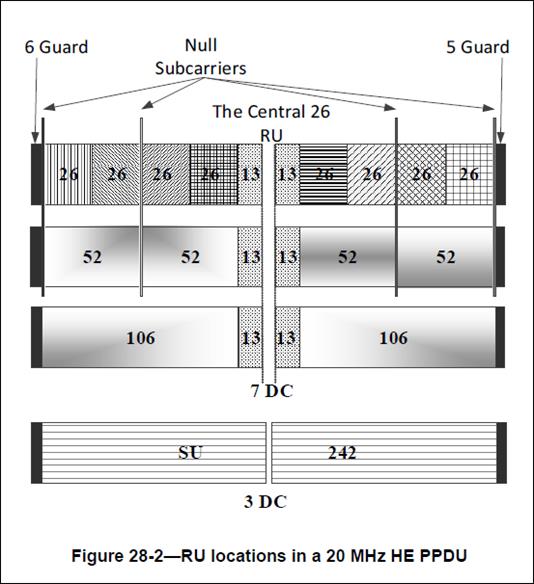 Table 2 and Table 3 show the distribution of RUs for 20 MHz and 40 MHz bands, respectively. As shown in the tables, RU tone mappings are inconsistent for bands of different widths, and multiple bandwidth allocations might cause signal overlapping. To avoid the overlapping issue when multiple bandwidth allocations exist, some 26-tone RUs are restricted to be used in 40, 80, 80+80, or 160 MHz OFDMA operation. For example, RU 5 and RU 14 are not available in the 40 MHz bandwidth formed by 26-tone RUs. 802.11ax increases the number of data subcarriers from 52 to 234, which extends OFDMA symbols by three times but increases usable subcarrier usage. As shown in Table 7, the 802.11ax data rate is improved from the following aspects: Figure 5 and Figure 6 describe downlink non-OFDMA and OFDMA, respectively. As shown in the figures, with the same bandwidth, OFDMA can send data to three users at one Transmission Opportunity (TXOP) while non-OFDMA requires three TXOPs.

As shown in Figure 7 and Figure 8, uplink multi-user (MU) OFDMA operates as follows:

1.        The AP sends a trigger frame to initiate an uplink MU exchange process.

3.        Upon receiving the PPDUs, the AP waits for a SIFS and then sends a Block ACK (BA) frame to each client or sends a multi-STA BA frame to all clients (channel busy/idle state not considered). 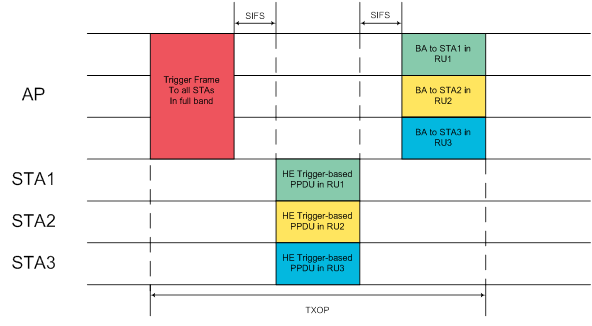 Compared with 802.11ac, 802.11ax has improved the maximum number of supported users from four to eight and allows concurrent use of OFDMA and MU-MIMO. This greatly improves multi-user concurrency performance.

802.11ax can use the trigger mechanism of OFDMA to collect the compressed beamforming feedback (CBF) of multiple clients' channels at one TXOP, as shown in Figure 9. The following data exchange procedure is similar for 802.11ax and 802.11ac. In uplink MU-MIMO, clients first collect the CBF of the associated AP and then send a trigger frame to initiate an uplink MU-MIMO process. The following procedure is similar to uplink MU OFDMA.

802.11ax assigns a non-unique ID (in the range of 1 to 63), called a BSS color, per BSS to help identify whether a packet is from the same BSS as the client.

Upon receiving an inter-BSS packet, a client compares the RSSI of the packet with the maximum OBSS_PD level (–62 dBm).

·          If the RSSI is equal to or higher than the level, the client determines that inter-BSS interference is too strong and spatial reuse cannot be performed. 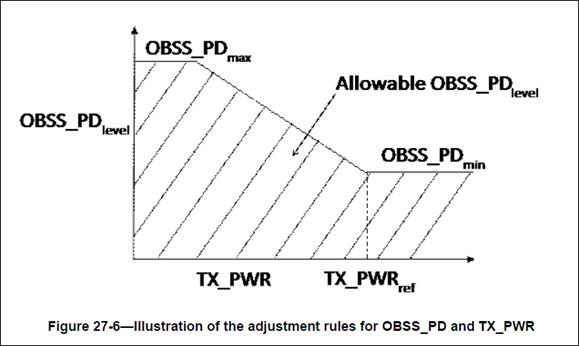 As shown in Figure 11, for example, BSS 1 and BSS 2 overlap with each other. BSS coloring enables client 2 to ignore packets from BSS 1 and transmission adjustment automatically reduces the transmit power of client 2 to reduce its wireless coverage (circled with a dotted line). This reduces co-channel interference and achieves spatial reuse without affecting communication in BSS 2.