·     Compatible with most storage controllers.

·     Supports automated installation of mainstream operating systems and drivers on the server.

As shown in Figure 1, iFIST consists of the following layers:

·     Hardware layer—Hardware storage space on a server that is used to store the H3Linux operating system files and the iFIST application program.

·     Operating system layer—H3Linux, which provides the operating environment for the iFIST application program.

·     Application layer—Provides the graphical user interface of iFIST based on the browser/server architecture. 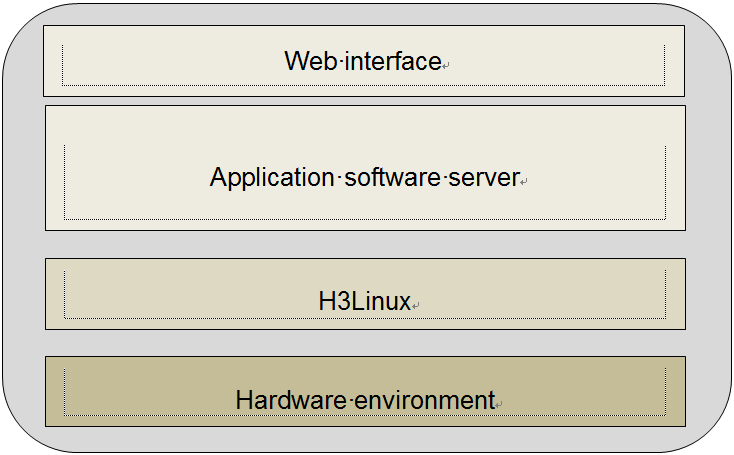 Redundant Arrays of Independent Drives (RAID) is a technology that enhances the security and stability of the server storage system. RAID configuration requires that a storage controller be installed on a server. With a storage controller installed, you can group a number of physical drives to create a RAID array (also known as a logical drive) to provide data redundancy and validation functions.

·     Create RAID arrays—Select physical drives to build a RAID array with the specified name, RAID level, and other settings. 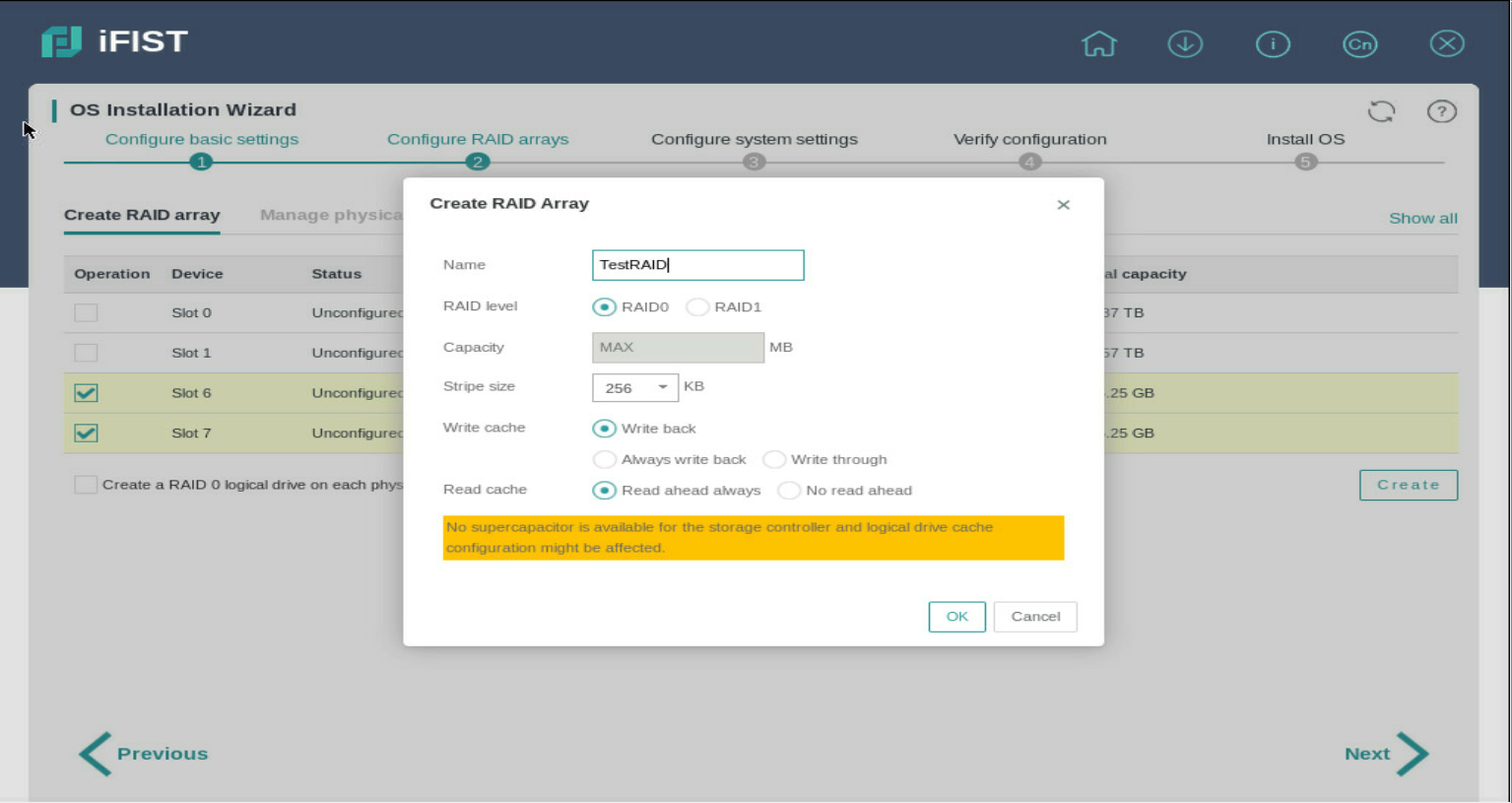 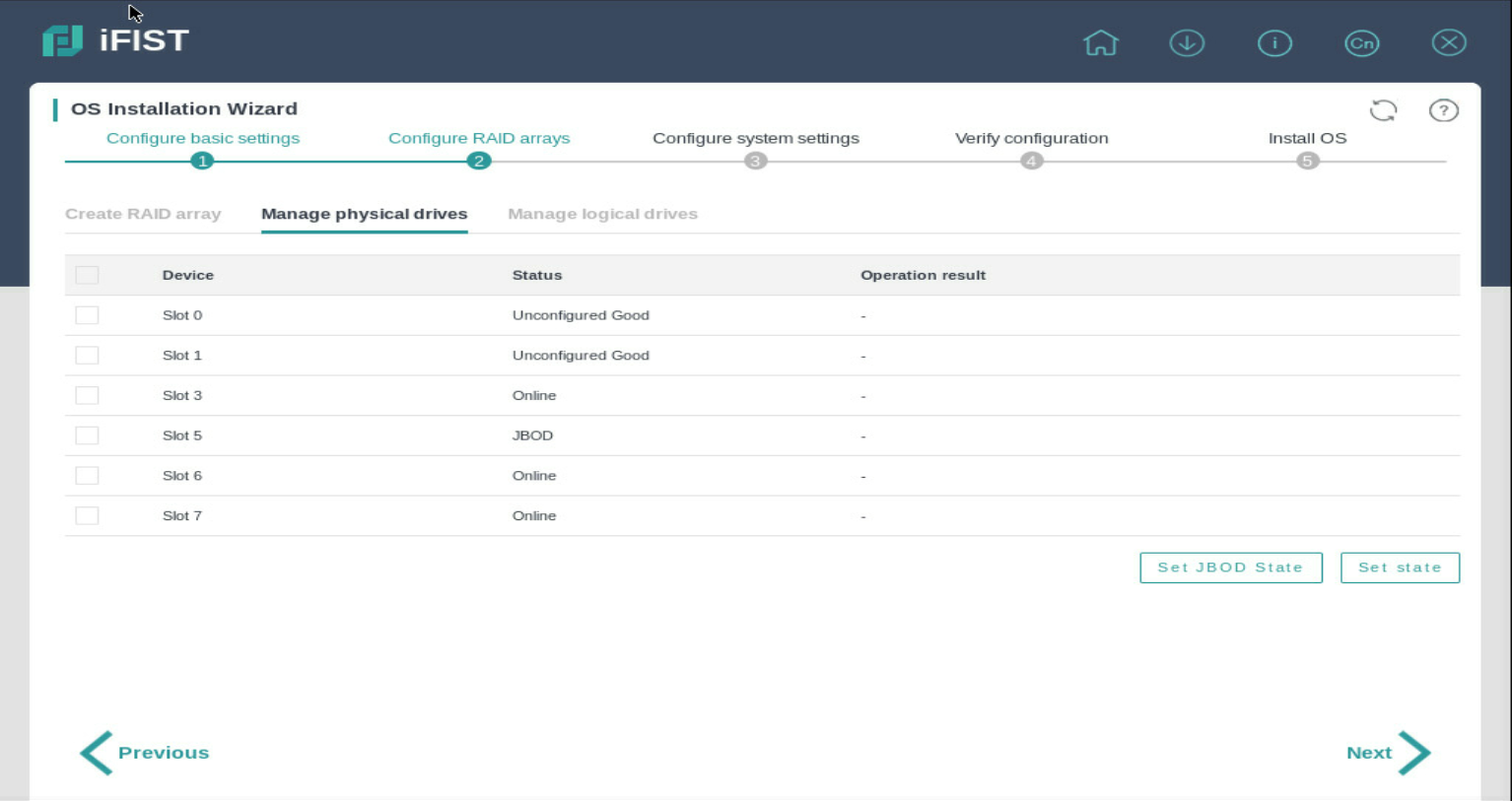 iFIST can integrate with storage controller drivers as well as the management tools and RESTful APIs provided by storage controller vendors. After the user configures RAID settings through the iFIST Web interface, iFIST automatically calls the related tools to apply the settings to the server.

Table 1 lists the storage controllers supported by iFIST on different types of servers.

A user often encounters the following issues during the manual OS installation process:

·     The storage controller driver in not integrated in the OS image, resulting in hard drive recognition failures during the installation process.

·     Manual intervention (such as configuring installation parameters) is required during the OS installation process, which increases the O&M time.

·     After the operating system is installed, the user needs to manually install the required drivers.

To address the preceding issues, iFIST provides automated OS installation on the server. A user can configure all the OS installation parameters on the iFIST Web interface, which then automatically installs the operating system on the server without manual intervention.

After the Configure system settings page is opened, iFIST performs the following operations:

1.     Determines the type of OS image to be installed according to the user-defined image source. Supported image source include CD (physical CD or HDM virtual media) and USB flash drive.

2.     Determines whether a repository has been mounted to the server. If yes, iFIST displays the drivers that match the OS and can be installed in the repository on the Configure system settings page.

A repository is released by H3C and it contains a bundle of driver and firmware installation packages for servers.

The configurable OS installation parameters on the page vary by the OS type. For example, to install a Windows operating system, you can perform the following tasks:

·     Select the drivers to be installed.

·     Select the OS image file to be installed. For example, if the image source contains two image files (Windows Server 2012 R2 ISO files for standard edition and datacenter edition), you can select which one to install.

·     Specify the host name, password, and key for the operating system.

·     Specify the target drive (physical or logical) for OS installation and set the drive capacity. As opposed to OS installation on a random drive, installing the operating system on a designated drive helps reduce the risk of data loss.

Figure 5 shows an example of the Configure system settings page. The page content varies depending on the operating system to be installed. 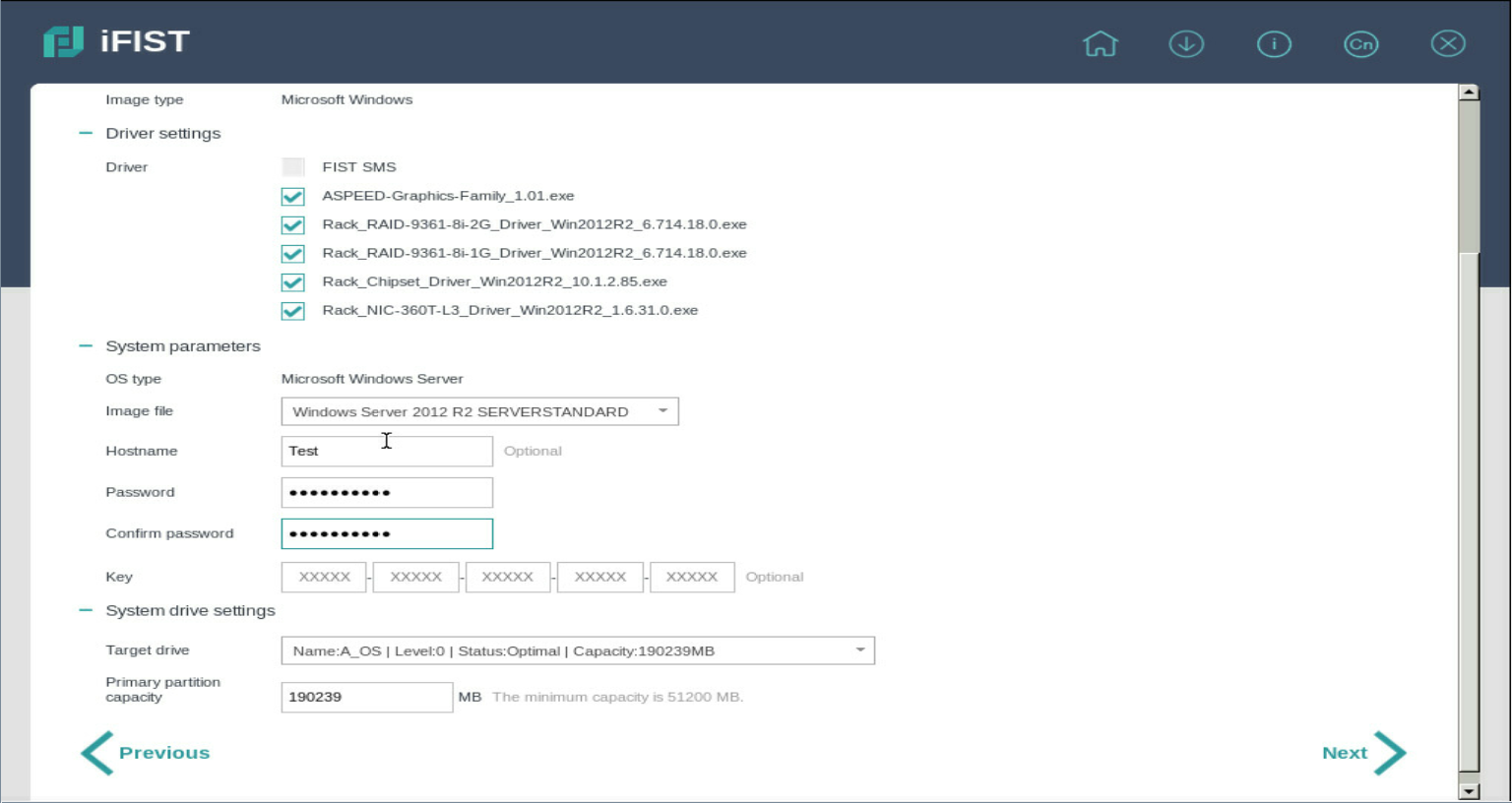 After the server has been running for a long time, some hardware components might fail due to physical loss and other reasons, causing problems such as system downtime. This kind of hardware failure might appear irregularly and is difficult to reproduce in the normal use of the server, which compromises the stability of the server. In order to resolve the issue, iFIST provides the server hardware diagnosis function to help quickly and accurately troubleshoot hardware faults by testing the hardware performance in various load conditions.

·     Stress tests—Runs compressive stress tests on the server hardware components to troubleshoot problems that are not easy to detect.

·     Displays information about key hardware components on the server, such as the CPU, memory, PSU, fan, HDM, PCIe, NIC, and GPU.

·     Displays the hardware test state and results on the iFIST Web interface.

·     Exports the server hardware information and test results to a USB flash drive.

iFIST displays information about the hardware components on the server on the Device Info tab of the Server Diagnostics page. 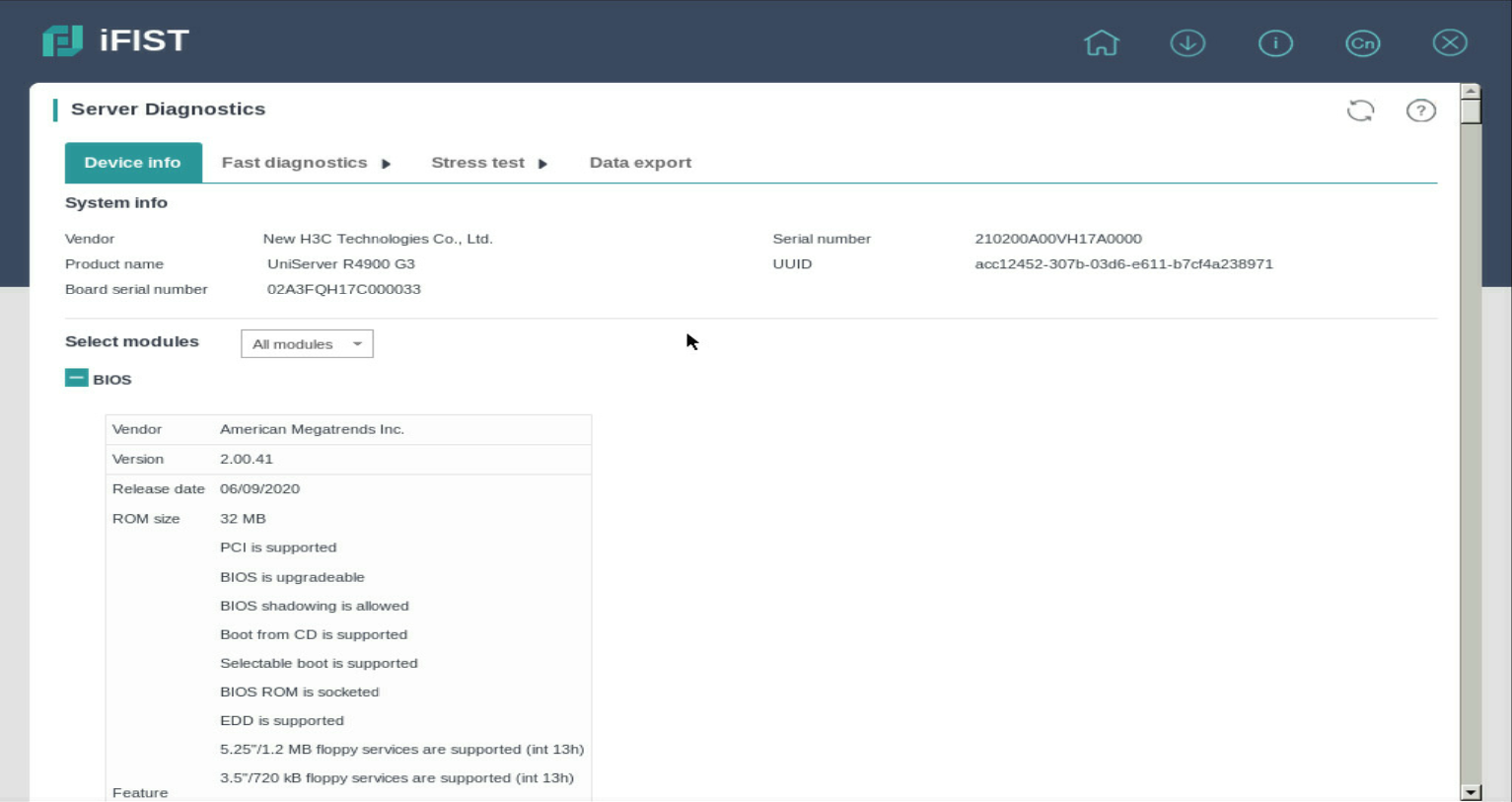 ·     Timed test—Test each of the selected hardware components for the specified duration one by one. 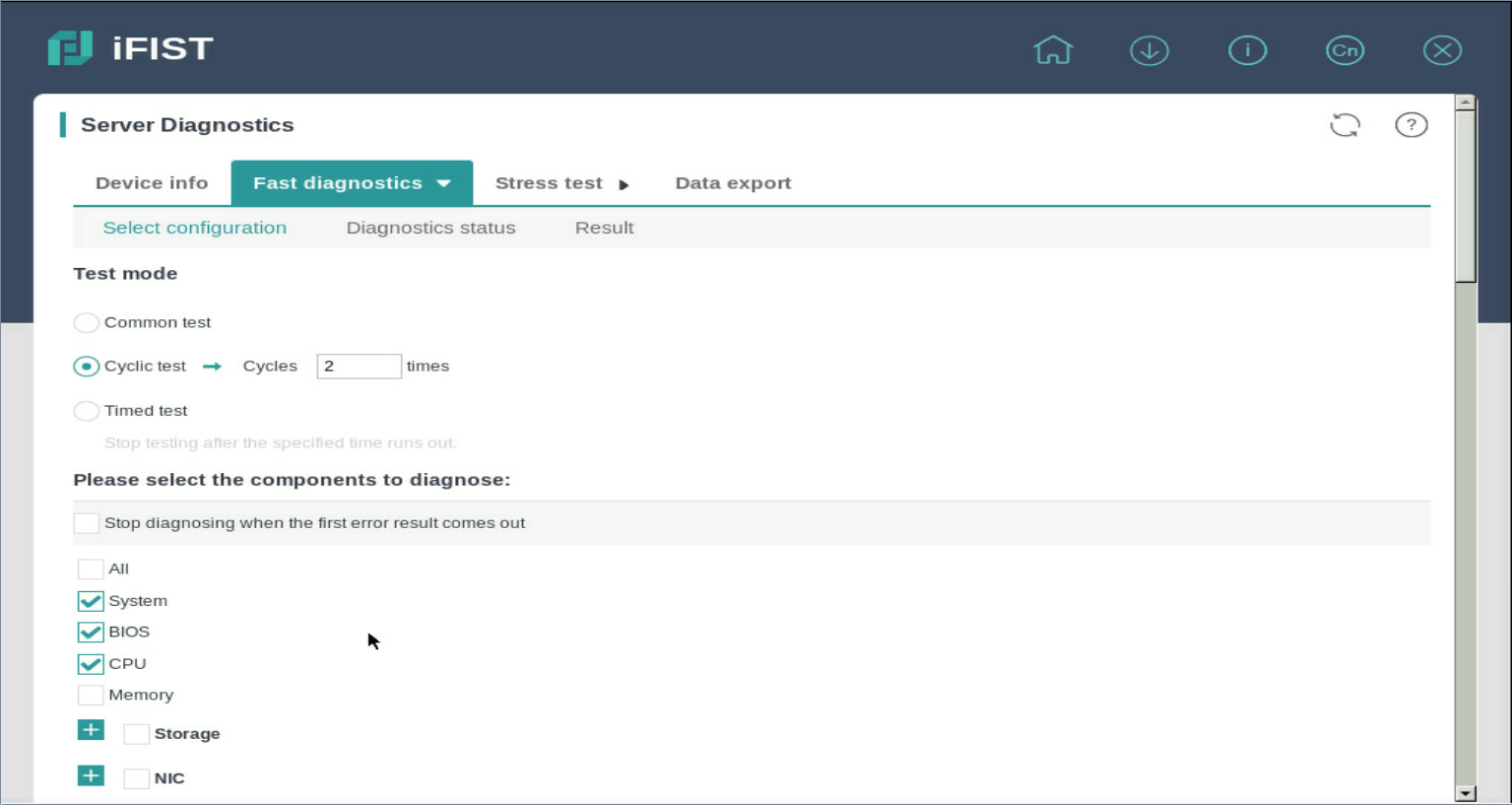 On the Data Export tab of the Server Diagnostics page, you can export the server hardware information and test results to a USB flash drive for further analysis. 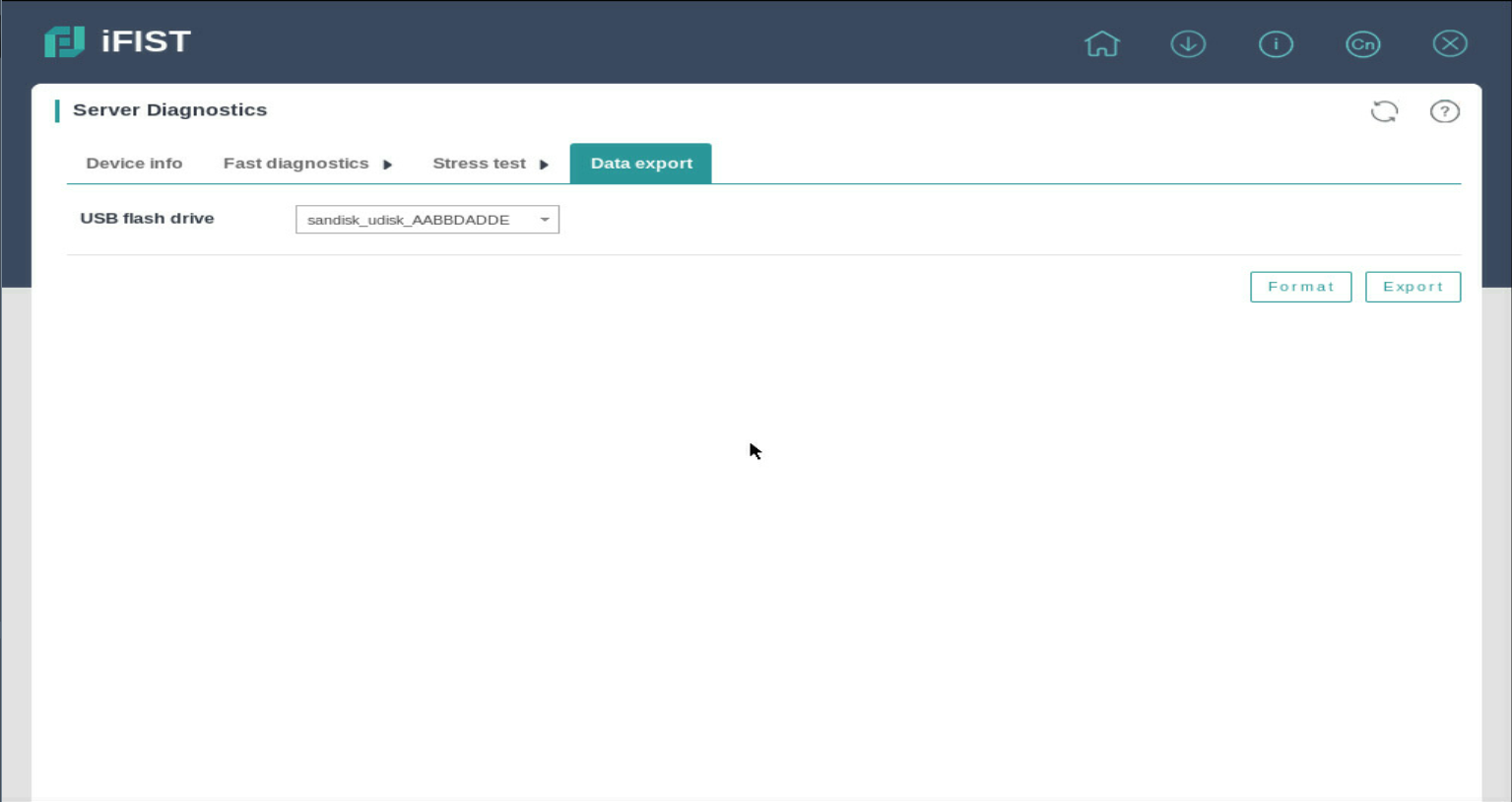 iFIST can obtain hardware information through both HDM and H3Linux on the server.