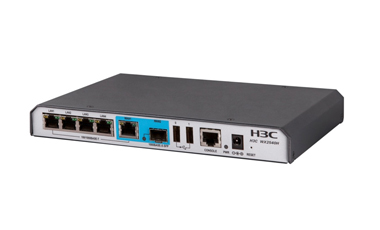 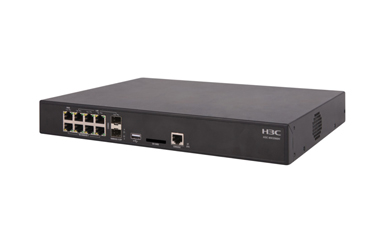 In addition, the WX2500H provides abundant port types including two USB ports (WX2540H), which can be used to connect with other enterprise peripheral devices.

WX2500H series AC is developed based on the latest H3C V7 platform. The new system sports significantly improvements in performance and reliability over the previous version, and is able to run the increasingly complicated network applications in the enterprise market. V7 features the following advantages:

Multi-core control: V7 can adjust the ratio of control cores to the forwarding cores in the CPU to make the most out of CPU computing power and strike the balance between control tasks and forwarding tasks, while providing strong concurrent computing power.

User mode multi-tasking: V7 adopts a completely new software privilege level system, where most network applications are executed in user mode, and allow each application runs a different task. Each task has its own dedicated resource and when a task fault occurs which will be isolated at its own space avoiding interruption of other tasks. This makes system run more securely and reliably.

User task monitoring: V7 comes with task monitoring feature, in which all tasks are monitored. When a user task goes wrong, system will reload and application will quickly recover.

The WX2500H series AC also supports MAC-based access control, which allows you to configure and modify the access rights of a user group or a particular user on an AAA server. The refined user rights control method enhances the availability of WLANs and facilitates access right assignment.

MAC-based VLAN is another strong feature of the WX2500H series AC. The administrator can assign users (or MAC addresses) with the same attributes into the same VLAN and configure a VLAN-based security policy on the AC. This simplifies system configuration and refines user management to the per-user granularity.

For security or accounting, the administrator may need to control the physical positions of wireless clients. The WX2500H series can satisfy this requirement. During authentication, the AC gets a list of permitted APs from the authentication server and then selects an AP for the requesting wireless client. In this way, the wireless client can only associate with that AP and thus its position is controlled.

With the built-in knowledge base in WX2500H, you can perform timely and accurate wireless security decisions. For determined attack sources such as rogue AP or terminals, you can perform visible physical location monitoring and switch physical port removing.

Wireless Intelligent Application Aware Feature (wIAA) provides a user role based application layer security, QoS and forwarding policy for wired and wireless users. With wIAA, administrator can specify websites users’s browsing, application protocols (HTTP, FTP) they use and bandwidth they are allocated. Compared with V5 AC, the V7 AC comes with Deep Packet Inspection (DPI) capability, expanding application detection and detailed statistics. Previous V5 AC detection was based on layer 4 Ethernet protocol (e.g. 80 maps to HTTP, 20/21 maps to FTP, 8000 maps to QQ and so on), which can be easily circumvented by agents while the new V7 AC is based on layer 7 characteristics of Ethernet protocols, as well as the typical packet signature to implement a more precise recognition and complete restriction. With DPI, administrator can instead of prohibiting user visit all e-commerce websites but to set restriction on a per-website basis (such as JD, Taobao, Yihaodian). This simplifies configuration and improves productivity.