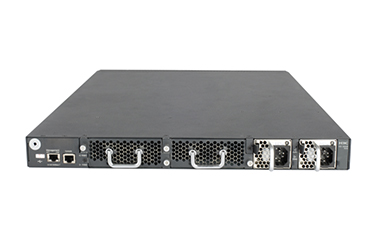 H3C S6800 series switch support Fiber Channel over Ethernet (FCoE), which permits storage, data, and computing services to be transmitted on one network, reducing the costs of network construction and maintenance.

H3C S6800 series switch support DRNI, which enables links of multiple switches to aggregate into one to implement device-level link backup. DRNI is applicable to servers dual-homed to a pair of access devices for node redundancy.

H3C S6800 series switch supports enhanced ACL control logic, which enables an enormous amount of inbound and outbound ACL, and delegate VLAN based ACL. This simplifies user deployment process and avoids ACL resource wastage. S6800 switch series can also take advantage of Unicast Reverse Path Forwarding (uRPF). When the device receives a packet, it will perform the reverse check to verify the source address from which the packets are supposedly originated, and will drop the packet if such path doesn’t exist. This will curb the increasingly common originating address spoofing.

To cope with data center cooling aisle design, the H3C S6800 series switch comes with flexible airflow design, which features bi-cooling aisles in the front and back. Users may also choose the direction of airflow (from front to back or vice versa) by selecting a different fan tray.

H3C S6800 series switch provides a rich management interface, including console, external network and USB. Management protocols such as SNMPv1/v2/v3 are supported aside from iMC Management Console. The network administrator may activate control through CLI, TELNET, SSH, SNMP, RESTful API, which gives maximum flexibility in accessing and managing the device. The administrator may also choose SSH2.0 and SSL encryption to shield the management session.

The typical data center application is an EVPN-VxLAN design,S125G-AF or S125X-AF swithes work as spine or spine/border, S68XX series work as leaf and border or ED. From this design ,the usrs can get a non-blocking large L2 system.