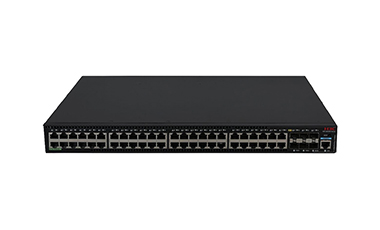 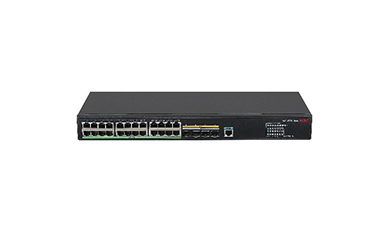 SmartMC simplify the operation, maintenance and management of small and medium-sized parks:

Mainly includes user management, etc.: After network access users are created and successfully activated, these users can access the SmartMC network through the one-key-armed port.

The H3C S5570S-EI series switches can be used as the management device of SmartMC. You can log in to the SmartMC network through the S5570S - EI to manage the entire network in a unified manner.

H3C S5570S-EI series switches support IRF2 (Second Generation Intelligent Resilient Architecture) technology, which is to connect multiple physical devices to each other, making it virtual as a logical device, that is, users can connect these multiple devices Treat it as a single device for management and use. IRF can bring the following benefits to users:

Simplified service IRF are also run as a single device. For example, the routing protocol will be calculated as a single device. With the application of the cross-device link aggregation technology, it can replace the original generation tree protocol, which saves the interaction of a large number of protocol packets between devices, simplifies network operation, and shortens the convergence time when the network is turbulent.

Elastic expansion IRF can realize elastic expansion according to user needs and ensure user investment. And new devices can be "hot-swapped" when they join or leave the IRF architecture, without affecting the normal operation of other devices.

High reliability of high reliability IRF is reflected in three aspects: link, equipment and protocol. The physical ports between member devices support the aggregation function, and the physical connection between the IRF system and the upper and lower-layer devices also supports the aggregation function, which improves the reliability of the link through multi-link backup; the IRF system consists of multiple member devices. Once the master device fails, the system will quickly and automatically elect a new master to ensure uninterrupted services through the system, thus realizing device-level 1:N backup; the IRF system will have a real-time protocol hot backup function responsible for the configuration information of the protocol. Backup to all other member devices to achieve 1:N protocol reliability.

H3C S5570S-EI series switches support the EAD ( terminal access control ) function, and cooperate with the background system to integrate terminal security measures such as terminal antivirus and patch repair with network security measures such as network access control and access authority control into a linked security Through the inspection, isolation, repair, management and monitoring of network access terminals, the entire network can be transformed from passive defense to active defense, single-point defense to comprehensive defense, and decentralized management to centralized policy management, improving the network’s ability to deal with viruses. , worms and other emerging security threats overall defense capabilities.

H3C The S5570S-EI series switches provide enhanced ACL control logic, support large-capacity ingress and egress port ACLs, and support VLAN-based ACL delivery, which simplifies the user configuration process and avoids waste of ACL resources. In addition, the S5570S-EI series will also support unicast reverse path finding technology ( uRPF ) . The route between the source addresses formulated in the , that is, to verify its authenticity, if it does not exist, delete the data packet, so that we can effectively prevent the increasingly flooded source address spoofing in the network.

The S5570S-EI series switches have multiple reliability protections at the device level and link level. The S5570S -EI series switches support the reliability design of pluggable AC and DC dual power modules , and can flexibly configure AC or DC power modules according to the needs of the actual environment. In addition, the whole machine also supports power supply and fan fault detection and alarms. These designs enable the equipment to have higher reliability.

It supports basic network protection mechanism functions, and supports various types of protection, such as ARP protection. When the ARP rate exceeds the attack waterline, users who have attack behaviors are isolated.

H3C S5570S-EI series switches support L2 ( Layer 2 )~L4 ( Layer 4) packet filtering function, provide based on source MAC address, destination MAC address, source IP address, destination IP address, TCP/UDP port number , protocol type, and VLAN traffic classification. Provides a flexible queue scheduling algorithm, which can be set based on ports and queues at the same time, and supports SP (Strict Priority), WRR (Weighted Round Robin), and SP+WRR modes. Supports the CAR ( Committed Access Rate ) function with a minimum granularity of 16 Kbps. Supports port mirroring in both outbound and inbound directions, which is used to monitor the packets on the specified port, and copy the data packets on the port to the monitoring port for network detection and troubleshooting.

At the same time, H3C S5570S-EI series switches adopt various green energy-saving designs, including auto-power-down (port automatic energy-saving). If the interface status is always down for a period of time , the system will automatically stop power supply to the interface and automatically enter the energy-saving mode. ;Support EEE energy-saving function, if the port is idle for a period of time, the system will set the port to the energy-saving mode, and when there is a packet to be sent and received, it will wake up the port to resume services through the monitoring code stream sent regularly to achieve the effect of energy saving. Meet the EU RoHS standard for material environmental protection and safety.