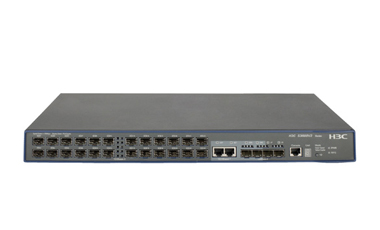 The S3600V2 series switches offer L2/L3 wire-speed switching capability for all ports. The system offers 4 GE ports to meet the requirement of a single piece of equipment for multiple Gigabit uplinks and for access to the Gigabit server, thereby greatly increasing savings on equipment investment.

The hardware supports L3 wire-speed switching, and is able to identify and process the application traffic flows from L2~L4.

All ports have an independent data packet filter, and distinguish specific application flows for different management and control.

Intelligent Resilient Framework (IRF) is an innovative resilient network technology that allows enterprise customers to design and implement Fast Ethernet core and aggregation that are adaptable, providing exceptional reliability, scalability and easy management. With IRF technology, the S3600V2 series switches can be interconnected together to behave as a single logical switching entity called a Distributed Fabric. From management and configuration perspectives, the Fabric appears as a single device, while from a performance perspective, each switch in the Distributed Fabric can make its own forwarding decisions, both at Layer 2 and Layer 3 for traffic that appears on its ports.

Distributed Device Management is the control system for IRF technology, responsible for distributing management and control information across the IRF Distributed Fabric.

Distributed Resilient Routing, provided by Enhanced Image, is an advanced routing implementation that allows multiple interconnected switches in an IRF Distributed Fabric to behave as a single active routing entity.

Distributed Link Aggregation, provided by Enhanced Image, allows networks and IRF Distributed Fabrics to be coordinated with switches at the edge of the network. DLA guarantees high levels of resilience since failure in one of the members of the Aggregated Link results in automatic redistribution of traffic across the remaining links.

The S3600V2 EI series switches support PoE+ function for the LAN switching infrastructure, which provides power over a copper Ethernet cable to an endpoint (Powered Device).

With PoE and Voice VLAN technology, these innovative switches can provide the perfect solution for a converged voice and data network.

The S3600V2 series switches support VRRP (provided by Enhanced Image), and can build a VRRP back-up group with other L3 switches. In this way, a redundant route topological structure can be built so that when a fault occurs in guaranteeing communication continuity and reliability, network stability is maintained.

The S3600V2 series switches support the VRRP backup group port tracking function. As long as this function is enabled, customers can elect to track the link state of the master’s uplink port and decrease the priority of the switch when the port fails. This in turn triggers the new master to be determined in the backup group.

u The S3600V2 series switches can configure the Priority for Protocol Packets. Each protocol packet has its own priority. Customers can modify the priority of the protocol packet with the help of relevant QoS commands.

The S3600V2 series switches support 802.1x authentication to identify users who attempt to access the network. With the 802.1x client version checking function enabled on a switch, the switch checks the version and validity of the 802.1x client running on supplicant systems to prevent those using earlier versions of the 802.1x client or illegal clients from logging in.

The S3600V2 series switches support the Guest VLAN function. This function enables supplicant systems that are not authenticated to access specific resources and thus performing the corresponding operations, such as obtaining the 802.1x client, upgrading the client, or obtaining other upgrading programs.

The S3600V2 series switches can also prevent unauthorized access to the network by binding any combination of MAC, IP and PORT.

The S3600V2 series switches support DLDP (Device Link Detection Protocol). DLDP can detect the link status of the optical fiber cable or copper twisted pair. If DLDP finds a unidirectional link, it disables the related port automatically or informs users to disable it manually depending on the specific configuration, to avoid potential network problems.

The S3600V2 series switches support VCT (Virtual Cable Test), convenient for troubleshooting. Customers can start the virtual cable test (VCT) to make the system test the cable connected to the current electrical Ethernet port. The test items include: whether a short or open circuit exists in the Rx/Tx direction of the cable, and the length of the cable in normal status or the length from the port to the fault point of the cable.